This week the German Designer Conference held by Microsoft took place in Berlin. I wrote a blog entry about it quite a while ago. The event is called Xtopia and it was the first event of a reoccurring series. I held a session there about a Microsoft technology you are also a little bit familiar with if you follow my blog regularly as I already wrote some introductory words about it.
So I take the opportunity of this session to give you a short update on Astoria and to give you the chance to download the slide deck and the source code of my compelling demos ;) (I announced them as probably the demos with the ugliest user interfaces of the whole conference - and I was right). 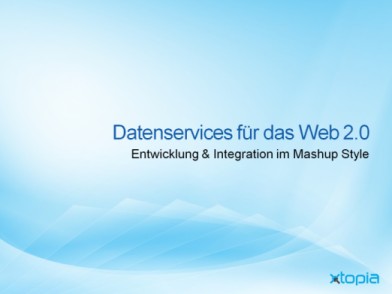 So what's new about Astoria? There are two major improvements available from the Astoria homepage which are:

So I encourage you again to check out Astoria and give Feedback to the team and feel free to download my slides (unfortunately only in German) and the demos attached to this blog entry.