BUILD 2016 was two weeks ago in my favorite city, San Francisco. There was a TON of .NET content & announcements delivered. Here’s a recap of all the big .NET sessions, announcements, downloads and resources. And my apologies for not getting this out sooner, but I was unexpectedly out last week. Plus, anyone trying to pay attention to all the stuff happening that week probably needed a little break anyways ;-)

.NET all the things

There were some pretty significant announcements for .NET developers.

Oh ya, we also released a preview of the next version of Visual Studio and .NET Framework and released Visual Studio 2015 Update 2. Check out the .NET related posts on all the goodness.

It’s never been a better time to be a .NET Developer! You can use .NET to literally build any app for any device.

BUILD wouldn’t be BUILD without all the fantastic .NET speakers presenting. Seriously, more .NET sessions reigned in the top 10 than any other topic. Check out all the .NET sessions here with this handy link: https://aka.ms/BuildDotNet

I’d recommend starting with the .NET Overview with Scott Hunter and Scott Hanselman. This starts out with a good high-level overview of the .NET implementations, including Xamarin, and how we want to eventually get to a .NET Standard Library.

Also check out the rest of these fantastic sessions:

For all the BUILD sessions head to: https://channel9.msdn.com/Events/Build/2016

.NET for the locals

With the huge help of the local developer relations team, we put on another great local community event sponsored by the .NET Foundation and GitHub. Hosted at the Microsoft Reactor, called Open Night @ the Reactor. The event was designed to educate and energize the open source community, highlight community influencers, and showcase how Microsoft supports the local developer ecosystem. We also made a Friday pass to the BUILD Hub/Expo available to anyone that wanted one.

We had over 130 people in attendance and included lightning talks from Jono Bacon from GitHub, Shaun Walker from the .NET Foundation, Alice Deng and Eva Zheng from the student developer community (organizers of Calhacks – UC Berkeley annual hackathon), and Ryan Boyd from Neo4j.

I did a quick introduction that started off with a short story of how I am a Bay Area native who graduated from Cal State East Bay (called Hayward back then – I guess no one knows where Hayward is ;-)). I couldn’t have had a successful career without the developer community and attending then eventually speaking at user groups. Spaces like the Reactor are invaluable to the community.

I think it was a hit!

So, what the heck have I been up to!? It’s been a couple months since I moved to marketing and I still feel like I have no idea what I’m doing. BUT, I did have a fantastically busy and rewarding time preparing and executing for BUILD. Here’s a couple accomplishments that you might have noticed:

We got www.microsoft.com/net website updated. If you ever were there previously, I’m sorry! Now we have a modern, responsive design, and better explanations of .NET Framework & .NET Core. It’s a work in progress but it’s a good start.

I designed my first t-shirt and people seemed to like them. I promised to get the artwork put it in the .NET Foundation’s SWAG repo and up on https://dotnet.spreadshirt.com soon.

My fist t-shirt as marketer for .NET! Come by the #Build2016 .NET booth mention "all the things" and get yours! pic.twitter.com/Yo4BydOzJs

I did a podcast last month with Shawn Wildermuth as part of his Hello World Road trip. If you’re interested in hearing me blab about my life and career and my first computer check it out: https://wildermuth.com/hwpod/62/Beth-Massi

I also did a Channel 9 Live session with Scott Hunter and Rich Lander on .NET Core the last day of BUILD. Here I talk a little bit about what I’m doing now and why I’m so excited about .NET now and into the future. 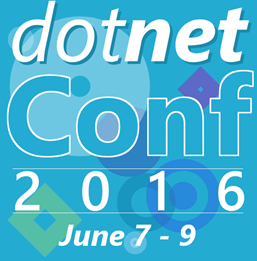 Last but not least, we’ve started planning the next dotnetConf! You should see the www.dotnetconf.net website updated with the June 7-9 dates. Are you ready to rediscover .NET? Immerse yourself in the world of .NET and join our live stream for 3 days of free online content June 7 - 9 featuring speakers from the .NET Community and Microsoft product teams. The live stream will be broadcasted on https://channel9.msdn.com.

Learn to develop for web, mobile, desktop, games, services, libraries and more for a variety of platforms and devices all with .NET! We’ll have presentations on .NET Core and ASP.NET Core, C#, F#, Roslyn, Visual Studio, Xamarin, and much more.

Let us know you’re interested, sign up at www.dotnetconf.net, and we’ll keep you posted when the agenda goes live.

WHEW! That’s a lot. I’ll try not to be so much of a stranger here on this blog. Until next time.