This is below the list of BHM components which can be updated :

How can you update BHM if the machine running it is connected to the Net ?

BHM has a self-update feature to update automatically its main components.
By default the BHM snap-in will check every 15 days for an update.
When doing that, it is checking on Azure for signed updated BHM components and propose you to download updated components.
If you accept the components they will be downloaded on your box running BHM and BHM will be then restarted and updated. That's all !

You can also manually check for updates  in the BHM snap-in : 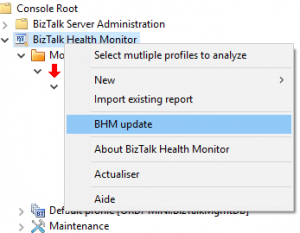 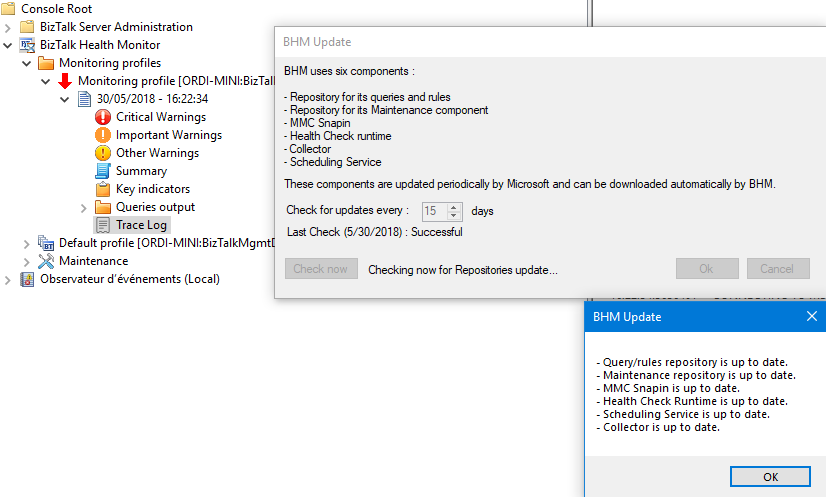 In BHM Snap-in you can have all details of the version of its components in its About box : 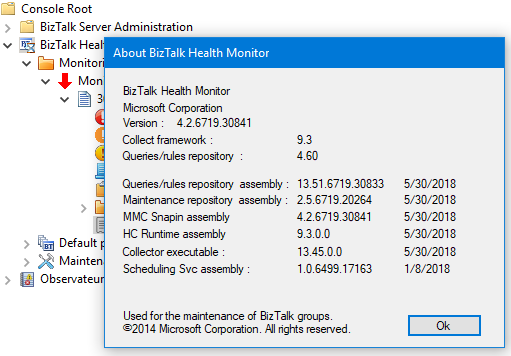 How can you update BHM if the machine running it is NOT connected to the Net ?

The process is also easy and fast :

- Copy both files ‘ChkBHMRep.exe’ and ‘Microsoft.WindowsAzure.Storage.dll’ from the BHM folder on a machine connected to the Net
- On the connected machine run ChkBHMRep.exe w/o specific params to download quickly the updated BHM components in a subfolder named “\Updated”
- Copy the downloaded components from this subfolder to the installed BHM folder on the machine running BHM
- Re-register the BHM snap-in on the machine running BHM (mandatory if ‘mbvsnapin.dll’ or MYHC.dll belongs to the updated components) :
- Open an Admin cmd in your Microsoft.Net folder (C:\Windows\Microsoft.NET\Framework\v4.0.30319)
- Run this command :  installutil “C:\Program Files (x86)\BizTalkHealthMonitor\mbvsnapin.dll” (if BHM was installed in its default folder)

So please remember to update periodically BHM if not already done to get at least some fresh repositories (query/rule and maintenance).
We update indeed very frequently the BHM query/rule repository to add queries and rules and raise so more warnings when a new BizTalk or HIS CU is avail, when a new Feature Pack is avail, when we identify some frequent issues/bugs to detect , to fix some false warnings, etc..

As usual, feel free to let you comments or raise your questions