You may have noticed that with Internet Explorer 9, dragging a site’s icon to your desktop results not only in a link being created, but also the IE window being refreshed.

Why does that happen?  (And is there a choice?)

A Tale of Two Shortcuts

By default, when you click and drag a site icon to desktop, you’ll create a Pinned Site Shortcut.

The page is relocated to a new window, which will show it as a pinned site.  For example, you’ll see the navigation buttons take on the key color of the site icon (or the msapplication-navbutton-color meta element.)  More on pinned sites in a moment.

Just want a basic link without the extras?

Hold down Shift then drag & drop the site icon to the desktop.  This will create an Internet Shortcut.  You’ll notice IE does not move or change in this case.

You may be asking “So… why the two options?”

Certainly the most substantial difference is that one gives you a pinned site, along with the many features they support – Jump Lists, Notifications, Thumbnail Toolbars, etc.  Links for learning more are at the end of this post.

Let’s look at some other differences.

Firing up the right mouse button, here are the right-click menus for each (Internet Shortcut on left, Pinned Site Shortcut on right): 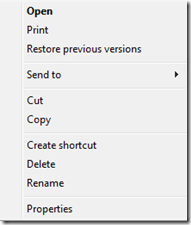 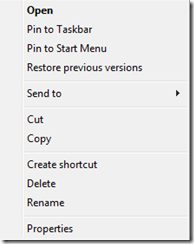 A Stroll to the Taskbar

Dragging (or pinning) the shortcuts to the Taskbar has different effects by shortcut type:

This post focused on the differences in shortcut features, but there’s much more that pinned sites can do (and generally don’t need much work to enable.)  Here’s where to find more: