Why do we need inbound rules?

If we need to modify the incoming request uri or request headers before the request is handed over to the execution engine in IIS we can make use of URL Rewrite inbound rules.

How to create an inbound rule:

Over here we will be discussing the use of URL rewrite inbound rules independent of ARR. To create an inbound rule, click on the website->go to urlrewrite->add rule(s)->Blank rule under Inbound rules.

Important Sections in an Inbound rule:

Mapping parts of an URL to sections in Inbound rule:

We want to redirect all the requests coming in over http to https.

Over here the pattern will be .* as we want to match and store the value of the uri present in the URL after the hostname. That is over here in our example .* matches with myapp/a.aspx.

Also note that pattern section expressions after match will be stored in {R:x} variable series where x is integer.

Also we want to make sure that this rule executes only when the request comes in over http or else we might end up in an infinite loop.

So add a condition stating that {HTTPS} is OFF.

And Action type will be redirect.

Action URL will be https://contoso.com/{R:0}

Below is how the rule will look like in the UI 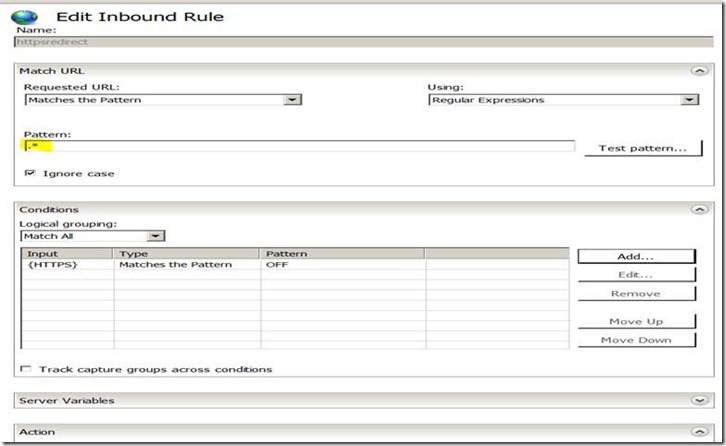 Below is how the rule will look like in the web.config of your site.

Previous example talks about a url rewrite rule redirecting the request. Let’s consider a scenario where we can rewrite the requests.

Solution: to achieve the above requirement, create a rewrite inbound rule at the site level.

Over here we need to have a pattern which matches with a.aspx so the pattern section starts and ends with a.aspx. So pattern would be ^a.aspx$.

If you want you can add a condition stating the this rule can be only executed when the hostname in the URL is contoso.com by adding a condition for {HTTP_HOST} matching contoso.com

Action type would be Rewrite

Rewrite URL would be b.aspx

In rewrite url we can only modify the URI part of the url as I had previously mentioned when we use rewrite without ARR.

Below is how the rule looks like in IIS UI.

Below is how the rule will look like in the web.config of your site.

So over here pattern should match to the URI containing oldsiteroot and the resource location, also we need to exclude the ‘oldsiteroot’ and store resource name in a variable so that we can use that to append to the new rewritten url.

I had previously mentioned that you can store any number of values or patterns in {R:x} variable by enclosing the required pattern section within the braces ().

Consider the below two scenarios. 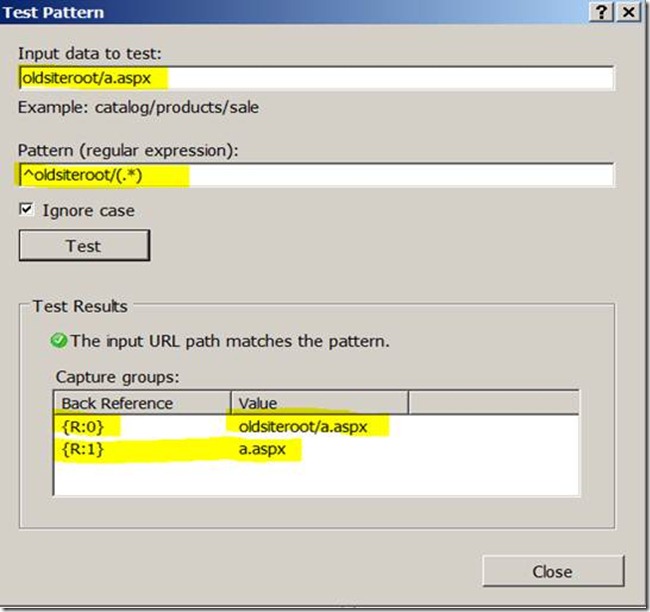 Action Type would be Rewrite and rewrite url would be {R:1} which would include the URI part excluding oldsiteroot.

Below is how the rule looks like in IIS UI

Below is how the rule looks like in web.config of your site.

In the next blog we will discuss about outbound rules and rewrite maps.