The September 2008 CTP of F# is now available for download.  F# is a functional programming language for the .NET Framework and really should be looked at by scientists/researchers.  Also check out the F# Developer Center on MSDN for more info and resources.

There are a lot of new features in this release – here’s a sampling:

The Units of Measure checking and interference feature is very exciting feature and potentially most scientifically revolutionary programming language features around - scientists and engineers to check out.  This is because the F# compiler knows the rules of units

Take a look at the SolarSystem sample -  A Solar System simulation application, taking advantage of Units of Measure in F# to do physics simulation.  Andrew Kennedy, who researched, architected and implemented this feature has all the details. 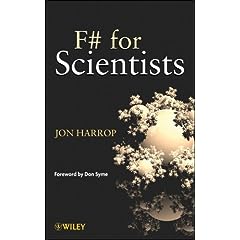