I spent the weekend at Mashed 2008, a "hack day".  Its sponsored by the BBC, Microsoft (through Multimap), the Guardian (sorry, Gruniad :-)). It's basically a 24 hour hack, with team competing to create the best mashup or web site or piece of code. Around 250 or so developers turned up for the event, which took place at Alexandra Palace, in north London, home of the world's first regular public ‘high definition’ television service, operated by the BBC. 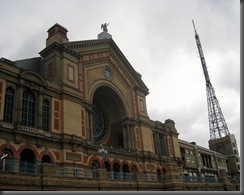 There were a number of sessions from the BBC, Microsoft (including my colleague Paul Foster), etc, in the morning, but come 1pm the fun started, as the teams got down to 24 hours of coding, many sleeping there overnight, or working right through the night. 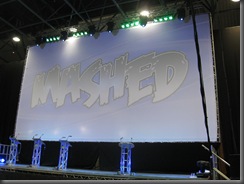 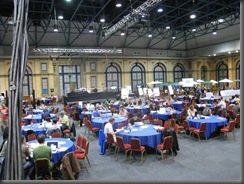 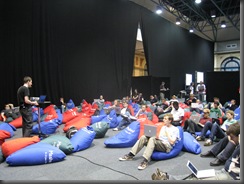 Everyone seemed to be using Twitter, in addition to the official Backnetwork, so there was quite a buzz going on. Our team had great fun with a blimp, which we attached a camera to, until someone let go of it and it ended up trapped in the roof - oops! 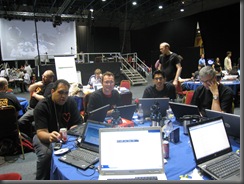 Come 2pm SUnday, the demos began, hosted by Sylvester McCoy (ex Dr Who). There were lots of interesting demos, great ideas, lots of hardware, and lots of crashes :-). There was lots of use of Twitter and Twitter bots for communication, and Fire Eagle for location based searches and services and mapping.

The biggest target for these tended to be the BBC, partially as they were event sponsors, partially because the BBC submitted several teams, but also because the BBC have a whole host of information on their site, and have opened it up for web access. New ways to play back redux video, search for programs and content, etc, were also demoed.

Lonely Planet are just releasing a web API as well, and opened it up early to developers at this event for them to experiment with. Great for location based services to get advice on where to go and what to see when travelling.