My customer is deploying Windows Server 2008 R2 using MDT Lite Touch Installation.  The wanted to have a way to select the operating system Roles and Features during the Deployment Wizard in a way similar to how the Install Roles and Features step works in the task sequence editor: 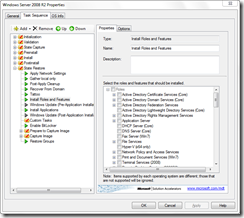 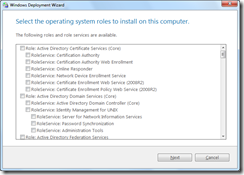 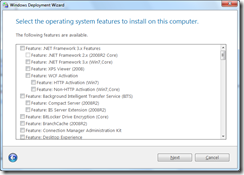 When selections are made, the OSRoles, OSRoleServices, and OSFeatures MDT properties are populated based on the selected items.  For these panes to actually do anything during the task sequence, there must be an Install Roles and Features step in the State Restore phase of the task sequence with no items selected.  Also, the OSRoles, OSRoleServices, and OSFeatures properties can be pre-set in CustomSettings.ini (or the MDT database) and the values in those properties will show up as checked items in these panes.  You can use the SkipOSRoles and SkipOSFeatures custom properties to skip either pane.

I have included in the attachment a standalone Wizard file (Roles_Features_Definition_ENU.xml), its associated script library file (DeployWiz_Roles_Features_Custom.vbs), and a launch wrapper script (Roles_Features.wsf) that runs ZTIGather.wsf and then launches this wizard.  If you copy these files to your MDT Scripts folder and run

from that folder, this custom wizard will be launched and will allow you to test drive using these panes without running a deployment.

If you decide that you would like to use these in the main Deployment Wizard, just do the following:

None of the Roles_Features*.* files are needed to use the panes in the main Deployment Wizard.  They are simply for taking the panes for a usability test drive.

Please note that this has only been tested with MDT 2010 Update 1 and may not work with earlier versions of MDT.

Disclaimer: The information on this site is provided "AS IS" with no warranties, confers no rights, and is not supported by the authors or Microsoft Corporation. Use of included script samples are subject to the terms specified in the Terms of Use .

This post was contributed by Michael Murgolo, a Senior Consultant with Microsoft Services - U.S. East Region.