Ta da, well I've finally finished Version 1.0 of my SMS Voting solution, the system supports up to 10 Polls each with their own validated scored criteria.

The idea is that people can send a simple SMS/Text with their vote for a Poll from any phone that supports SMS. It's a pretty complete vote system and it works!!

If you were at the TechEd Oz "What's New in Framework V2" Hour of power then this was the app I was running to record your votes. It takes around 5 minutes to receive around 200 votes via SMS, the gating factor is the network providers ability to forward the SMS Messages to the phone. At it's peak the phone happily deals with a couple of messages per second.

It uses the following Technologies:-

You can download the documentation, Cabs, and Source files from Darren's most excellent Project Distributor site.

Download it, give it a whirl, use it and provide me any feedback and I'll try and incorporate it.

The Solution is split in to two parts:- 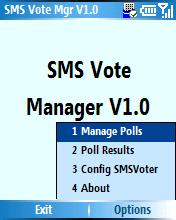 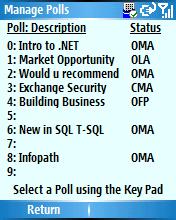 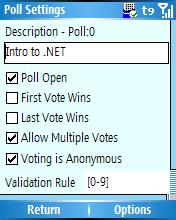 The Data Manager - Lets you view the count of votes, the vote detail and exporting of data