I've been tagged by my former fellow, Carlo Cardella from my previous life at Microsoft Product Support Services (GTSC). This is a nice game among friends with blogs. I tried to follow the chain back to the one started this joke until at the level 12 back from Carlo I got to a blog site where a server exception occurred (cobbler's shoe). The rule is that anyone gets tagged, has to write 5 things about him/herself that nobody knows about him/her. So, here I come:

1. I love classical music. My father is a conductor and even if I hated classical music in my young ages (due to the fact that children wants to be anything, but not like his parents), my brain went thru a change, called adulthood. My favorites are Chopin, Liszt, Mozart, Beethoven. My father decided to find a teacher to teach me play piano when I was 6, but after she chopped on my hands, I left this career path.

2. I'm dancing tango with my wife, Kati. We are "pretty" beginners and also skipped the last year, but we are planning to re-start this nice hobby. Tango is a couple therapy, and in the meantime you learn dancing. I suggest tango for every couple before getting married.

3. I love dogs. I have one, he's called Wolfie (Wolfgang, Szabó). He's a Westie (West Highland White Terrier). He has soul and he's a very smart puppy. Unfortunately, he has chicken meat allergy. On the picture above, you see how he licks down the sour cream from his own nose. Try to do this after him: 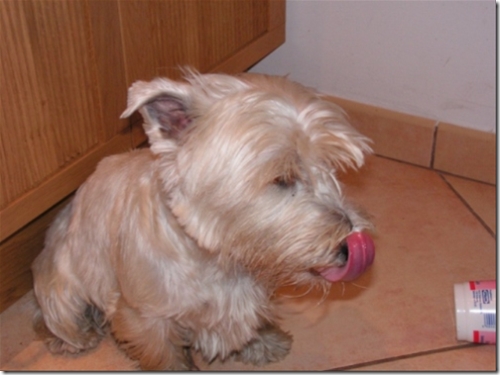 4. I was a very bad student in the primary and secondary schools. My brain needed to reach the age 23 to realize that I need to reach certain things in order to go ahead. One example: I failed from math at the 5th grade in the primary school.

5. I used to be a root of a linux server at an internet solution provider company, at around 1997. Since then, I forgot anything, except the root's password. :)