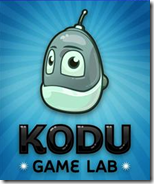 “Kodu allows you to build games using traditional programming paradigms such as conditional statements and loops but without having to fire up Visual Studio. Basically you start with a blank world which you can customise, add characters and set up interactions.”

The good news it that we have now released a free technical preview for Windows. This version has many changes from the Xbox version most notably a new keyboard and mouse UI so an Xbox controller is no longer required. You can find out about other changes on the Kodu blog. Or find out more and download it here.