The change feed library was built against latest SDK 2.0. Short! New SDK version brings several improvements and one of the most important change was the new multiplexing connection model. More about it in future blog post.

Extensions to the monitoring

I wrote about the monitoring in my previous post. The whole monitoring is built on so called "remaining work estimator" which estimates the number of the documents till the end of the feed. There was an improvement introduced into the library.

It's possible to get the estimation per partition now! Why does it matter? Because it give you better visibility into the system. You are able to see what partition is left behind and how far.

Let's see how to create the remaining work estimator instance:

And let's see how to use it:

And that's the result:

I'm working on the event sourcing system powered by CosmosDB (I'll be writing about it in the future posts) and we are heavily dependent on the change feed. We need to be sure the system works 24/7. We need to be prepared for failures also when using change feed. In this case when a partition processing is stuck.  So, we are monitoring change feed on several levels.

We have a runner which runs periodically and reports what is the estimated work left per account/partition. That's the input for the graphs and alerting. It is built on top of the estimator shown in this post. If any estimated work hits a limit, it means we have a problem with "stuck" partition.

See the graph of the simulation from our test environment: 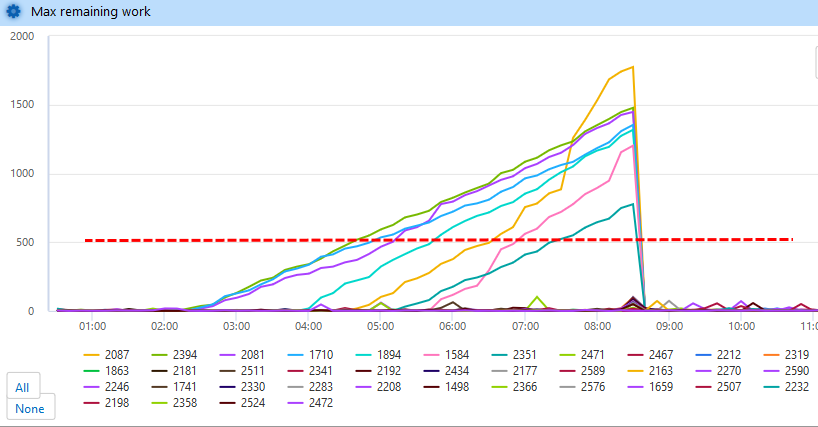 The red dotted line is an alert level. Once we are alerted, we are able to see what partitions are stuck. Because we record who process what, we are able to find out the instance which was processing the partition last time and diagnose the issue.

That's all for now, happy monitoring!