The point here is what is a big fuss if testing team raises 'invalid' defects unknowingly. At least they don't leave anything to assumptions which is far more dangerous. There primary job is to find defects, whether that is a 'valid' defect or not is a secondary question.

One of the tester I am mentoring complained that his testing team had found 108 defects out of which 104  were valid and only 4 were invalid but his management didn't seem to appreciate them for the the number of valid defects found as they were expecting number of invalid defects to be zero.

My take on this:

Yes, it is important to reduce number of invalid defects.

-> Test Metrics gets screwed (Test Effectiveness or lets say Test Productivity goes down with no. of invalid defects)

When you raise a bug in your reporting tool like Test Director, it has to go through complete bug lifecycle. Say you raised a bug spending effort in recording it and then it turned out to be invalid, you developer rejects it.  Finally you have to close it.

You bet me that "invalid" bugs doesn't please any manager. It is a human behavior to criticize something that is not right.  It sets them off.

When they observe that you raise many invalid bugs, they start expecting that every time. They stop paying due attention to valid bugs considering them to be invalid. Quality over Quantity concept.

Developers are under pressure to reduce number of defect found in their code by the test team. Now if you log it, they go defensive and try their best to prove your bug an invalid bug so that it doesn't spoil their commitments.

Now that we have a problem. Let me propose something which we successfully implemented 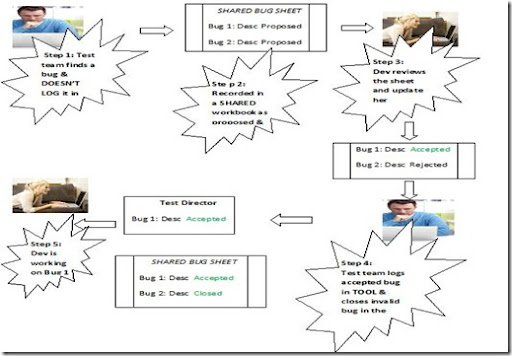 Now with this process, every bugs gets verified online by the Development team even before we officially log it. They update the sheet saying that they are okay with so and so bugs and we log only those bugs in the Bug Management tool  and hence all "VALID" bugs.

Bugs which they update as "INVALID" or "REJECTED", we update the SHARED SHEET with more information like repro steps etc and they change the status in the sheet accordingly. Now if it was our fault and it was actually INVALID defect, we update the SHEET and close it there itself rather than logging it in bug management tool and going through the entire process.

Now our metrics always say  100 % valid bugs. We don't miss any bugs because we record it anyway in the Shared Sheet and triage it with development team online. Development team feels good as they get a chance to to repro bug and confirm before it is actually logged against them.  We don't have to waste time in the triage meetings discussing whether its a bug or not. Now business only take call on functional bugs which are more important to end user.