Often when debugging you can run into an exception out of the blue, yet that exception doesn’t give you all the information that you need to diagnose the issue. Often this issue can be resolved by examining a deeper or earlier exception that was thrown and then swallowed up before being surfaced to the user. But it’s not always easy to get back in time, enable the correct exceptions and examine exactly what cause this issue. But the fact that IntelliTrace is always running and collecting debug data when exceptions are thrown can often majorly help to alleviate this scenario, as seen below.

In this example one of our developers was working with some XAML code and ended up running into an XAMLParseException as seen below.

Now this initial exception wasn’t informative enough for our developer to take action, so he took a quick look over at the IntelliTrace events list and browsed though the most recent exceptions. There on the list was the actual exception thrown instead of the more general XAMLParseException that ended up bubbling up to the surface. 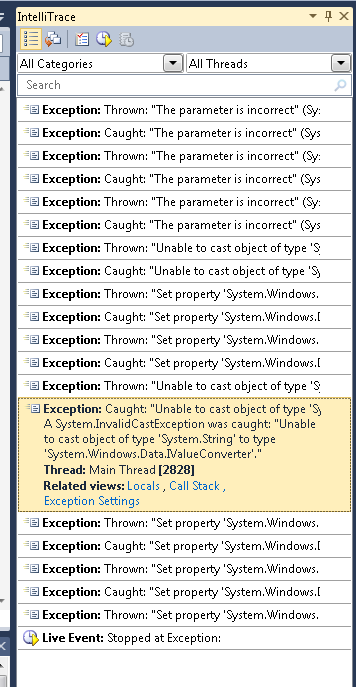 From that exception he was able to take much better action on the bug jumping right to where he needed to change something like Converter=VisibilityConverter to Converter={StaticResource VisibilityConverter}. I like how this report from the developer that using IntelliTrace can just be an unobtrusive part of your regular debugging. Then when you need more info there are some times where it can really step in and save you a bunch of time and hassle.