Very nice for Azure…  But there is something, in my opinion very important inside CTP2, in the Azure IaaS VM context, which is worth noting over the others, that is what is called “SQL XI”!

What is “SQL XI”? Well, don’t make the mistake to read “XI” as ancient Romans, it is not…. Read it as “xStore Integration”! I’m not joking with you, then I will also tell you that “xStore” is the internal name of Azure Blob storage… Now you got it? YES, this SQL Server 2014 feature (integration) will give you the possibility to create a database and its related data and log files directly on Azure Blob storage, without passing through Azure data disks!

Still confused? Look at the picture below:

This is a feature introduced in CTP2, then if you want to play with it, you need to download it from the link below:

You can find detailed info on SQL Server Integration with Windows Azure Storage in the following section of SQL Server 2014 Books Online:

The first question that may raise in your mind would be probably: why the SQL Product Group made it? Based on my understanding, these are valuable reasons:

It is worth mentioning that SQL Server uses temporary leases to reserve Blobs for storage with a renewal of each Blob lease every 45 to 60 seconds. If a server crashes and another instance of SQL Server configured to use the same blobs is started, the new instance will wait up to 60 seconds for the existing lease on the Blob to expire. To remove/break the lease for emergency reasons or troubleshooting, it’s possible to manually do that using “Lease Blob” REST API or the following example application that is ready for you:

An interesting architectural consideration is that the path to the Azure storage is different using this new feature. While using the traditional Azure data disk, and then creating a database on it, I/O traffic will pass through the Virtual Disk Driver on the Azure Host node, using
“SQLXI” it will now use the Virtual Network Driver: 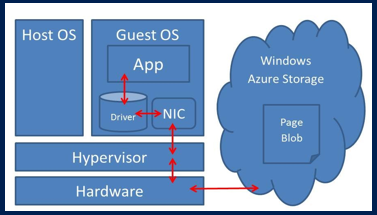 Why this is interesting and gain more performances? For the following reasons:

OK, it’s now time to finish with digressions and start with the step-by-step procedure…… Want to try immediately with this feature? Obviously you can find instructions on the links below, but there are several aspects not clarified and some un-answered questions, then I would recommend you to follow my step-by-step list below. First of all, you need to create (if not already available) an Azure storage account, and then create a container with “Private” security access: 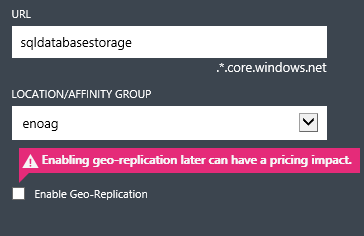 IMPORTANT: For performance reasons, it’s highly recommended to create the storage account in the same datacenter as the Virtual Machine where you will install SQL Server 2014 CTP2, or use the same “Affinity Group”.

Since you will use at least two blobs, one for data file and one for log file, it’s recommended to disable Geo-Replication since it’s not supported for SQL Server, in this way you can save 30% over your storage costs. I have been asked several times by customers and partners why this, the reason is simple: there is no ordering guaranteed in asynchronous storage replication, then may happen that writes to the data file blob would happen before the writes to the log file blob, then violating the fundamental principle (requirement) of every transactional database system including SQL Server, that is “Write-Ahead Logging” (WAL), as you can read in the super-old but still valid KB article below:

Now, you need to create a container for your atabase with “Private” security ccess level, if you want to avoid strange errors, always use lower case etters with Azure storage names, including blobs: 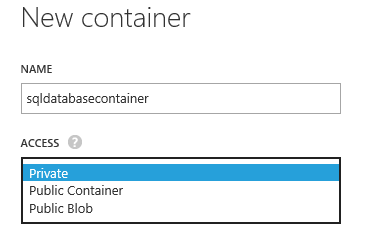 Note that my container has a full path equal to “**http://enosg.blob.core.windows.net/sqldatacontainer**”, his is important to remember when you will use Server Management Studio later  this post.

Even if the same container can be used my multiple databases, I recommend to create only one per container since the security mechanism that I’m going to show you, it’s based on the container itself. The next step is to create a policy and a Shared Access Signature (SAS) to protect and secure the container, please note that this is not optional, SQL Server requires it in order to work correctly with the Azure storage. There are several ways to create the policy and the SAS, but since I don’t want to write C# code for this simple task or use complex REST APIs, let me use a nice tool called “Azure Storage Explorer” that you can find here: http://azurestorageexplorer.codeplex.com .

Install the tool and open it, then insert the name and master secret key of your storage account. If the operation will succeed, you should see the content of your storage account, along with the list of your containers, be sure to select the one you want to use to place your database in, then click on the bottom “Security” button: 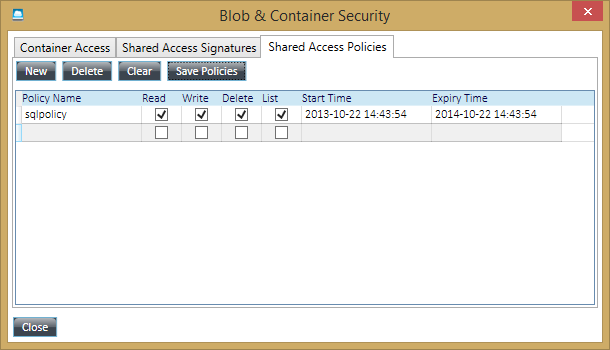 In some documentation you can find in Internet, “Delete” is not listed as a privilege requirement, but if you want the possibility to DROP the database from SQL Server, you need to include it in the policy definition. Regarding the “Expiry Time” for the policy, even if is
technically possible to have an infinite lease (see the URL below), it’s recommended to use a fixed limit in time (1 year in my example above) and then renew periodically:

If you want to know more about SAS and Blob storage and containers, see the link below: 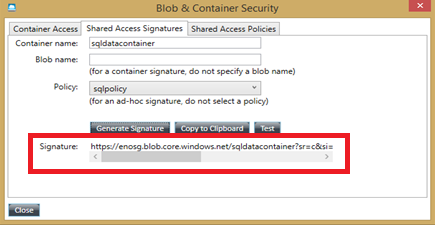 Now it’s finally the time to open SQL Server Management Studio inside the Azure Virtual Machine (VM) you created to test “SQL XI” integration, the first thing you have to do here is create the SQL credential objects necessary to properly access the Azure blob container you
created before. A SQL Server credential is an object that is used to store authentication information required to connect to a resource outside of SQL Server. The credential stores the URI path of the storage container and the shared access signature key values. For each storage container used by a data or log file, you must create a SQL Server Credential whose name matches the container path. Please, read it again: the credential name string must be exactly the same as the Blob container path, otherwise SQL and Azure will not match the security information. Just to give you a practical example with the storage container I created above, the right full path to use is, including HTTPS prefix,  http://enosg.blob.core.windows.net/sqldatacontainer and this is the credential object name you have to create in SQL Server Management Studio, enclosing it in square bracket:

NOTE: Obviously I used a random and not valid signature, then don’t try to use it.

If you don’t want to use TSQL and prefer GUI, you can use the “Credentials” node in SQL Server Management Studio (under instance level “Security” container) and create a new one here. You can do that, but you need to specify a particular value  “SHARED ACCESS SIGNATURE” for parameter “Identity” as shown in the picture below:

An important note on the signature. The string you copied from “Azure Storage Explorer” is something like this:

But the part that you need to include in the “SECRET” clause of the TSQL statement above is only the substring starting from [ ? ] until the end, as shown below:

Once the command will be executed, this credential will be saved in the SQL Server MASTER database in an encrypted form, then don’t worry about security, but take care of MASTER database backup regularly. Before proceeding further, let me show you a hidden gem in SQL Server Management Studio with a single print screen that I’m sure you will recognize: 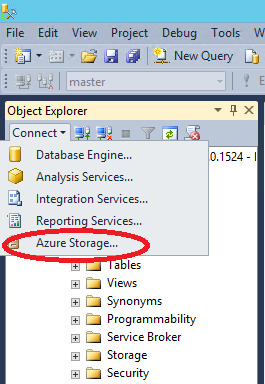 You got it! Now in SQL Server 2014 Management Studio (SSMS) it’s possible to connect (and register) to Azure Blob storage accounts, as shown in the dialog below:

Also in this case, any secret will be stored in a secured way in the SQL Server MASTER database. This is a nice new feature in SSMS, unfortunately the operations you can do on the storage accounts are limited to list and see the containers/files, and eventually delete them: I really hope that in a future SQL Server 2014 service pack, the possibility to generate SAS policies and signatures will be added, avoiding the usage of external tools or code. If you try to delete any file that it’s in use, you will receive the following error:

Now, it’s finally the time to create your first database using the TSQL command below:

NOTE: Just for your information, this command took 7 seconds to be executed. I also tested the creation of 100GB database data file with 10GB transaction log file and it completed in 17 seconds, and it seems pretty fast.

And this is the final result you can observe in SSMS: 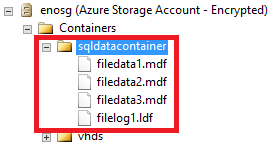 Even if the Azure blob container has been create with “Private” security access level, and SAS policy and signature has been applied, it’s recommended to use the following security measures:

For more information on TDE, that’s fully supported also in this scenario, see the link below:

Now that you have your SQL Server instance in an Azure VM and your database directly on Azure blob storage, let me point out something important related to database maintenance and life cycle: 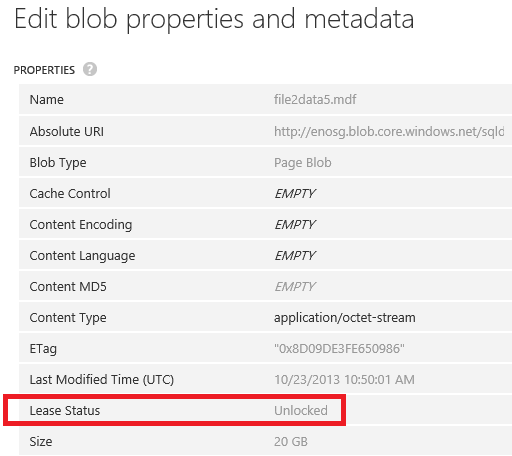 NOTE: I just tried using the TSQL statement but I was not able to re-attach the database with any script, everything is failing with the error below. After internal investigations, we confirmed a bug in the public CTP2 build version release, I will update this blog post as soon the hotfix will be released:

(NEW) : In order to solve this problem, you need to install the following post-CTP2 hotfix:

My final consideration is for the performance of transaction log file. Since SQL Server can use only one transaction log file at time, it’s not useful to create multiple ones on Azure Blob storage, as it’s valid also on-premise; in addition to that, the target performance you can  reasonably  expect from a single blob is 500 IOPS, then placing the transaction log there may be not a good solution for your database if you need more I/O power.How can we solve it? Well, until Azure Storage will not provide a feature like “Provisioned IOPS” (stay tuned!) to pump up I/O performances, the only possibility is to place the transaction log on a volume backed up by Windows Server 2012 Storage Space in stripe mode, created inside the VM. Adopting this approach, you will have to create your data files on Azure Blob storage using “SQL XI” feature, and leave the transaction log “inside” the VM, a TSQL command example is shown below:

For more information on Windows Server 2012 Storage Spaces and I/O scalability in Azure VMs, look at the white-paper below:

That’s all folks, let’s move another piece of your data into the Cloud with SQL Server 2014 and Windows Azure.