I came across this article in the Financial Times a little while ago ‘Obama steals a march with technology’; all about how he used a superior technology strategy to beat Mrs Clinton.  What reminded me about it was an article on the BBC this morning ‘Obama uses iPhone to win support’.

The original article from February described how his use of technology gave him increased agility, better interaction with citizens and and online fundraising network.

The Obama website offers almost instant video replays of his speeches, which are also packaged by Obama officials for YouTube. A few mouse clicks from each webcast provides a simple procedure to make online donations. Users can set up blogs, join the Obama Facebook group and even download ring tones featuring recordings of his speeches.

The contrast with Mrs Clinton’s relatively conventional website is instructive. In one of her first webcasts Mrs Clinton offered to “have a conversation with America”. But the questions she received were obviously screened. The fact these “conversations” took place online could not disguise the fact they were controlled.

The application they have now developed for the iPhone (available here) has a call friends feature, gives up-to-date news, talking points on hot topics, photos and so forth. 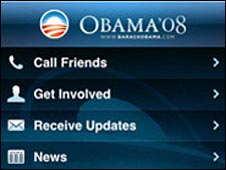 "Having your friends sorted by battleground states is something I haven't seen any other politician come up with before. This is a glimpse of the future of high-tech politicking."

As he says ‘this is a glimpse of the future’. I think politicians are waking up to the power of technology in communicating with citizens, next time around it will become a key weapon.