There are numbers of blogs that folks wrote about memory leaks in Microsoft .Net Framework managed code and unmanaged code based applications.

In this blog I wanted to:

I plan to update this blog with more code samples as we continue to investigate customers’ applications and find additional platform leaks or coding practices that cause memory leaks in WPF-based applications.

To illustrate the issues I attached a sample application. The application can launch different child windows; each can cause a separate memory leak. In each of the cases, closing the child window does not actually release the memory held by Window object as you would expect. 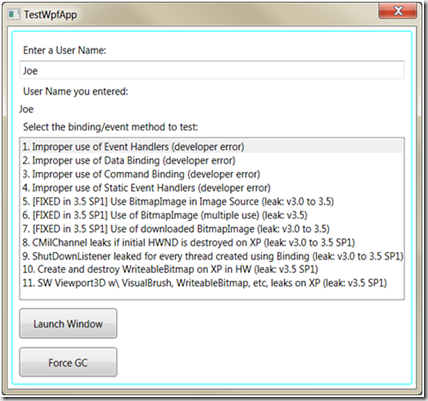 For clarity, I’ve included a table of the leaks:

To see the leak: 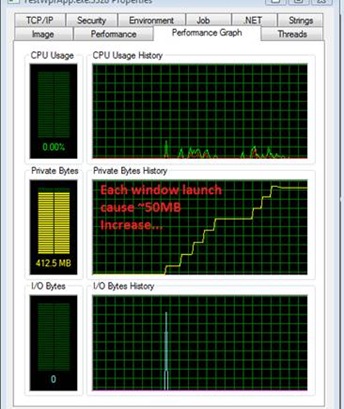 Each of the child windows causes a leak because of the reasons below.

1. Use of Event Handler 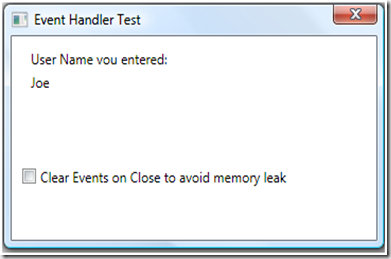 Figure 1-Leak caused by use of Event Handler

This leak is triggered because the child window (Window2) has a reference (it registered to an event) to Window1 TextBox1 which remains alive causing the Window2 object and its element tree to remain alive.

In general, if you do this:

Then when you done using Bar, but you are still using Foo then Bar will still remain alive as well. Not what you might have expected.

The Window2 object will remains “alive” as long as TextBox1 in Windows1 remain alive.

There are couple of approaches, the easiest one is simply to un-register the Windows2 object from its various event sources when the windows is about to close.

The second approach is to create some sort of indirections (e.g. “Weak references”). See this Greg Schechter's blog for an example.

2. Use of Data Binding 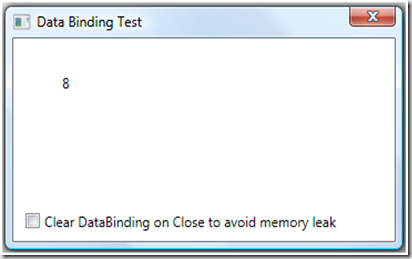 Figure 2 - Leak caused by use of Data Binding

This leak documented in this kb article. It is triggered because:

The TextBlock control has a binding to an object (myGrid) that has a reference back to the TextBlock (it is one of myGrid children’s).

Note that this type of a DataBinding leak is unique to a specific scenario (and not to all DataBinding scenarios) as documented in the kb article. The property in the Path is a not a DependencyProperty and not on a class which implements INotifyPropertyChanged and in addition a chain of strong reverences must exist.

Same leaky code can be also written in XAML:

There are few of approaches, the easiest one is simply to clear the binding when the windows is about to close.

Other approach is to set the mode of the data binding to OneTime. See the kb article for other ideas.

3. Use of Command Binding 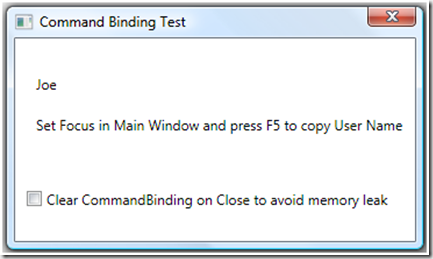 Figure 3 - Leak caused by use of Command Binding

This leak triggered because Window2 object adds a command binding to Window 1.

Note : This is likely not a common code practice, but it is provided to demonstrate the idea certain usage of Command Binding can cause leaks.

The easiest approach is simply to clear the CommandBinding when the windows is about to close.

4. Use of Static Event Handler 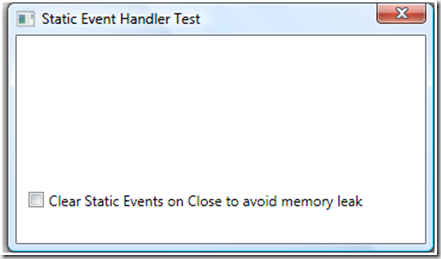 Figure 4 - Leak caused by use of Command Binding

This leak is triggered because the child window (Window2) has a reference (it registered to an event) to a Static event. Since object is static, Windows2 object will never get released.

Simply un-register the Windows2 object from the event sources when the windows is about to close.

The second approach is to create You can consider other approaches like (1) from before.

5. Use of BitmapImage in Image Source 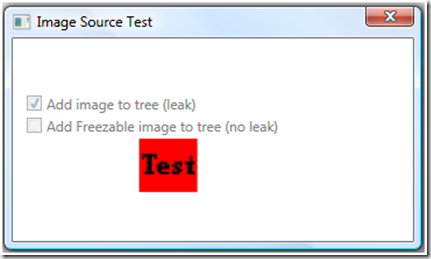 Figure 5 - Leak caused by use of BitmapImage as Image Source

This leak is triggered because under the covers WPF keeps a strong reference between the static BitmapImage (bi1) and the Image (m_Image1).

BitmapImage (bi1) is declared Static so it is not Garbage Collected when Window2 is closed, since under the covers WPF hooks events on the BitmapImage (for example the DownloadFailed event) it causes the m_Image1 Image to remain alive.

This in turn causes the entire Window2 tree to also remain alive in memory even after you closed it.

This leak can happen only when you use BitmapImage. It does not appear when you use DrawingImage for example.

Workaround can depends on your sceanrio. One workaround would be to Freeze the BitmapImage.

WPF does not hook events for objects that are frozen.

This woraround is used if you click on the 2nd checkbox above. Another workaround could be to Clone the BitmapImage or not to make it Static.

In general you should Freeze objects whenever possible to improve the performance of your application and reduces its working set. Read more here.

6. Use of BitmapImage in Image Source (Multiple Use) 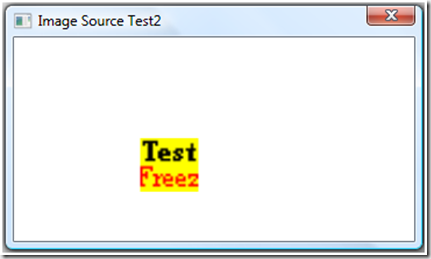 This leak is related to the leak mentioned above.

This leak is triggered because under the covers WPF keeps a strong reference between the static BitmapImage (bi1) and the Image (m_Image1).

When the Image gets assigned a new source (e.g. m_Image1.Source = bi2;), WPF “forgot” to remove the previous “old” events it hooked under the covers for bi1.

Again, since bi1 is static and is not Garbage Collected, it forces the Image to remain alive which causes the entire Windw2 to leak.

The workaround is simply not use the code above or also Freeze the other BitmapImage e.g.: bi1.Freeze();

7. Use of downloaded BitmapImage in Image Source 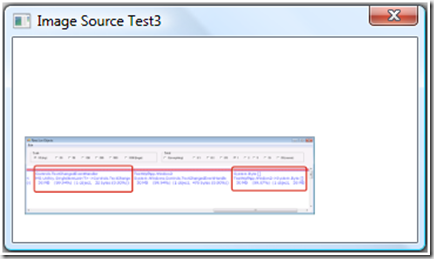 This leak is triggered because WPF does not remove internal reference to certain objects (such as LateBoundBitmapDecoder, BitmapFrameDecode, etc) which are used during web download and causes the leak.

This leak only happens when you download an image from the internet. (E.g. it does not appear when you load images from your local machine)

This issue will get fixed in the next .net service pack (.Net 3.5 Sp1)

To see the leak, you can launch above window, close it, and click on the ‘Force GC’ button to force garbage collection.

When you run the below commands in WinDbg, you will notice among others the following objects that remain in the heap. These are the objects that cause the leak and hold on to the Image control and the entire tree after you closed the Window2.

8. CMilChannel leaks if initial HWND is destroyed on XP

This is a leak in WPF present in versions of the framework up to and including .NET 3.5 SP1. This occurs because of the way WPF selects which HWND to use to send messages from the render thread to the UI thread. This sample destroys the first HWND created and starts an animation in a new Window. This causes messages sent from the render thread to pile up without being processed, effectively leaking memory.

The workaround is to create a new HwndSource first thing in your App class constructor. This MUST be created before any other HWND is created by WPF. Simply by creating this HwndSource, WPF will use this to send messages from the render thread to the UI thread. This assures all messages will be processed, and that none will leak.
Note: This issue is rare; only implement the workaround if you’re actually hitting this problem.

This is a leak in WPF present in versions of the framework up to and including .NET 3.5 SP1. This occurs because an event handler in WPF’s data binding engine is hooked but never unhooked whenever binding is used on a new thread. This sample creates a number of new Threads, and for each creates a new Window using data binding.

10. Create and destroy WriteableBitmap on XP in hardware rendering

This is a leak in WPF present in version 3.5 SP1 ONLY. This occurs whenever a WriteableBitmap is created and destroyed on Windows XP using hardware rendering. This sample repeatedly creates, updates, and displays new WriteableBitmaps continuously to leak memory.

This is a leak in WPF present in version 3.5 SP1 ONLY. This occurs when a VisualBrush, WriteableBitmap, or some select other classes are used within a Viewport3D in software rendering mode.

To experiment with finding the leak I used both CLR Profiler for the .NET Framework 2.0 and WinDbg and both seem adequate. The advantage is that both are free downloads.

You can see that my TextChangedEventHandler is holding on to 50MB of Byte[], as in image below:

Pretty much followed the directions provided in this blog here.

Twice (before and after the leak)

“!DumpHeap –stat” showed this before the leak happened:

After the leak “!DumpHeap –stat” showed this :

A ‘suspicions’ allocation of 50MB of byte[] is shown

I then performed gcroot on the largest allocation and windbg reported

Note: Roots found on stacks may be false positives. Run "!help gcroot" for

This is pretty much the same info that the CLR memory Profiler reported.

There are other third-party memory profilers such as SciTech’s Memory Profiler , Red-Gate’s ANTS Profiler , YourKit Profiler, JetBrains dotTrace 3.0 and others. All provide nice and richer user interface and better support than the tools I used above.

Other types of leaks

There are other types of managed memory leaks but outside the scope of this blog.

One such typical leak is when a managed object is holding onto unmanaged resources.

This can occur when:

a) Managed objects that hold on to the unmanaged resources and do not clean-up after themselves as they suppose to (typically in the IDisposable implementation).

This scenario is improved in .Net 2.0 with the introduction of the AddMemoryPressure API which allows objects to tell the garbage collector of the unmanaged allocation size.

WPF internally already forces garbage collection, so the recommendation to consider using the AddMemoryPressure API is only if you have a similar scenario in your own app.

Memory leaks are potentially more evident in WPF because of some new programming concepts WPF exposes and the internal WPF implementation. In addition, a typical WPF application is much richer in graphics and media, so if the app does leak memory, the leak is typically of a significant size and is easily noticeable. This makes it more important for app developers to be careful and avoid leaks in their apps.

Special thanks to Adam Smith, Eric Harding and Momin Al-Ghosien who helped in review and Mike Cook who contributed to this blog.