TFS 2010 - How about those Build delete options

When you delete a build in Visual Studio 2010, you don’t just get a message box that says “Are you Sure?.” You get this… 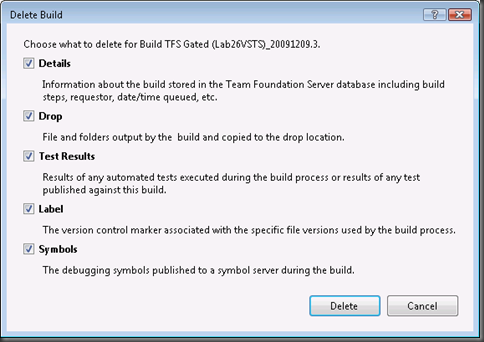 In 2010, you choose what you want to delete. You can delete any of the the following:

A lot of options, I know. But the default is to delete everything, which is what you probably want if you actually decide to delete a build manually. Note that these same options are presented to you for Retention Policies. So, you will see a very similar dialog there.

So what does it really mean to delete the details of a build?

Deleting a build in 2010 is different than it used to be. In VS 2008, deleting a build removed it from the database completely (as well as deleting the drop and label). In 2010, it simply marks it deleted in the database so that it doesn’t show up in the UI anymore. To get rid of the build completely you have to Destroy it! This is similar to the notion of delete and destroy in TFS Version Control. You can learn more about the destroy command in Adam Root’s blog post.

So does this change in deletion change anything else. Perhaps, notice what happens in VS 2008 when you do the following:

In 2010, you would get a new build number in step 5. The real problem here is if you generate your own build numbers and expect the number to be reused. If so, you need to Destroy instead of deleting your builds.