SharePoint 2007 introduced the ability to use the ASP.NET Membership Provider to authenticate users.  SharePoint 2010 builds upon this capability using the new claims-based authentication capabilities.  I was working with a customer to troubleshoot some stuff related to Forms Based Authentication (FBA), and I decided to detail the steps that I used to get things working.  This is the first blog post of what I am sure will be a series of posts on FBA configuration.

Forms Based Authentication in ASP.NET leverages a provider model.  You can leverage the out of box providers like the SqlMembershipProvider as we will in this post.  Alternatively, you can build your own providers as detailed in the MSDN topic, “Implementing a Membership Provider”.  This means you could use any data store, not just SQL Server.  You could use an XML file if you so choose, or you can use an LDAP server, or another database like Oracle or MySQL.  By abstracting away the storage from the API, we are able to provide our own implementations for authentication and authorization.

Microsoft ships providers that work with a SQL Server database.  The scripts to create the database are located at:

Rather than run the scripts individually, there is a tool called “aspnet_regsql” that can be used to configure a database to use ASP.NET application services.  If you have done this in ASP.NET or even SharePoint 2007, you will see that there are a few new steps here and there, but overall things are pretty simple once you configure everything.

Instead of screwing with your existing application, let’s create a new one so we can safely play.  Open Central Administration (make sure that you are running Internet Explorer as Administrator or you will have permissions problems here) and click the “Manage web applications” link.

On the resulting screen, click the ribbon toolbar button to create a new web application. 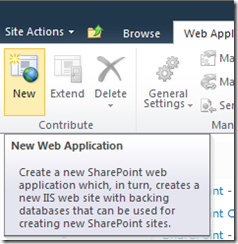 That will pop open a modal window.  In that dialog, choose “Claims Based Authentication” for the Authentication type.  By default, SharePoint will create a new IIS web site for you.  You can leave the default, or you can rename it as I did to “SharePoint – FBA Demo”.  What’s important to remember here is the port number being used, either something you choose or something SharePoint defaults to.  I accepted the default of “34513”. 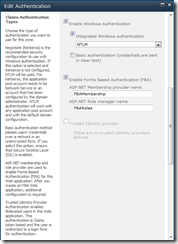 The last thing I configured was to change the identify of the application pool to Network Service. 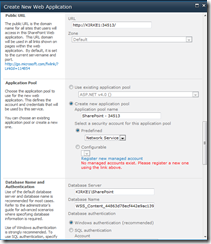 Scroll to the bottom and click OK, and SharePoint will churn for a moment to create a new application for you (it took about a minute and 15 seconds on my machine to complete).

Once complete, you are greeted with the following: Since you are using Windows authentication in addition to Forms Based Authentication, it’s OK to click the link to create the site collection.  I created a new Team site called “FBA Demo”, specifying a Windows account as the primary administrator. 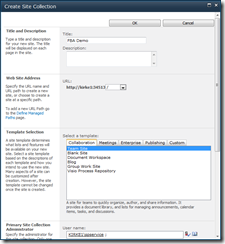 You have now created a new application, a site collection, and a top-level site.  The next step is to configure the new application to use FBA.  My friend Ali Mazaheri posted the configuration details on his blog post, “Configuring FBA in SharePoint Server 2010”, but I am sure he won’t mind a second explanation of the settings.

Open the Visual Studio 2010 Command Prompt from the start menu and type “aspnet_regsql”.  This will open a new application that lets you create and configure a SQL Server database to use ASP.NET application services.  I accepted all defaults and it created a new database called “aspnetdb” with the following table structure.

The next thing you need to do is to add some users to the database to test your solution.  The easiest way to do this is by leveraging Visual Studio.  Create a new project in Visual Studio 2010 using the “ASP.NET Empty Web Site” project template.  Edit the web.config file.  There is an empty element, “<connectionStrings/>” that you will edit:

Of course, use your own connection string here :)  The next step is to configure a Membership and Role provider.  Right above the </system.web> end tag, add the following markup.  I am using the names “AspNetSqlMembershipProvider” and “AspNetSqlRoleProvider” here, later when we configure SharePoint I choose the name “FBAMembership” and “FBARoles”.  The provider’s name is not important, what is important is the database it points to via the connectionStringName and the applicationName.

NOTE: Remove the line break in the 5-part name for the type attribute in lines 7 and 17. These are there only for readability.

What you have done here is told ASP.NET how to authenticate users via membership, and how to authorize them using roles.  For more information on ASP.NET membership, see “Introduction to Membership” in the MSDN Library.   Since these providers have been configured, we can now use a tool in Visual Studio that will make it easy for us to add users.  From the menu bar in Visual Studio select “Website / ASP.NET Configuration” to bring up the Web Site Administration Tool.

By default, your application is configured to use Windows Authentication, we need to change it to use forms authentication.  Click the security tab and choose “From the internet” and save your changes. 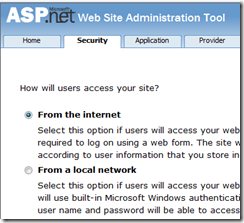 Behind the scenes, this makes a change in web.config to set the configuration/system.web/authentication node to “Forms”, telling ASP.NET we will use Forms Based Authentication.  ASP.NET will see the providers that we have configured in web.config and use them when authenticating users, adding new users, verifying roles, and other membership-related activities.

On the security tab, click the “Enable Roles” link.  Then click “Create or Manage Roles”.  Add a few roles, I chose “FBAAdministrators”, “FBAOwners”, and “FBAUsers”. 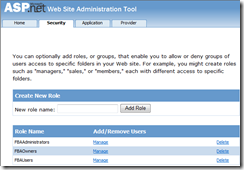 Click the “Create user” link to add a new user to the database.  Create a user “adminfba” and assign the user to the “FBAAdministrators” role. 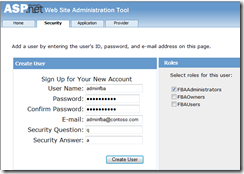 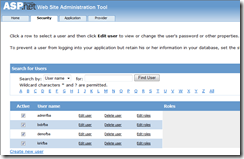 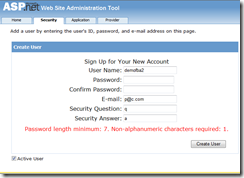 The whole reason that we are going through this is really because the password is not stored in the database as clear text, but rather as a hashed value.  This is stored within the aspnet_Membership table, which also contain the salt value used in the hash.  Using the Web Site Administration Tool saved us quite a bit of work. 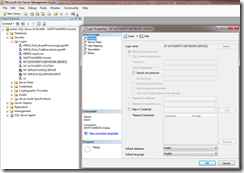 Next, grant permissions to that user by adding them to the appropriate roles.  I added the user to the aspnet_Membership_BasicAccess and  aspnet_Roles_BasicAccess roles. 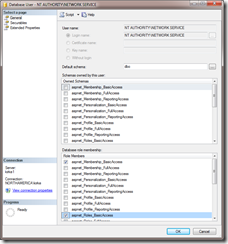 Remember to do this, otherwise you will receive errors that the security token service is not activated.

Double-click the Connection Strings feature, and under Actions choose Add.  Add a new connection string called AspNetSqlProvider (this is case-sensitive) and click OK. 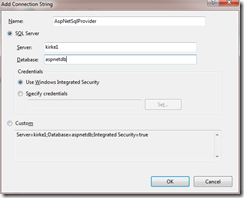 Behind the scenes, that created a new connection string in the following file: 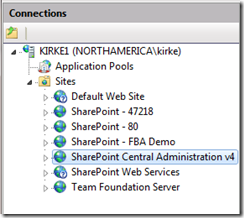 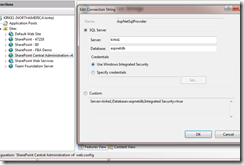 Now, expand the “SharePoint Web Services” node in IIS Manager and choose the “SecurityTokenServiceApplication” node.  Double-click on the connection strings feature and add a connection string just like before. 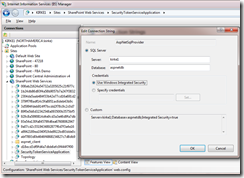 In the IIS Manager, click on the “SharePoint – FBA Demo” node again to reveal the list of features for the web application.  Double-click on the “Providers” feature.

Add a new role provider called “FBARoles”.  Specify the type as “SqlRoleProvider”, the ApplicationName as “/”, and the connection string name as “AspNetSqlProvider” (available in a drop-down to reduce the likelihood of fat-fingering this). 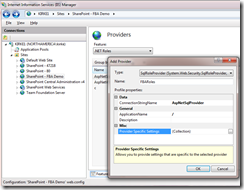 Add a new membership provider called “FBAMembership”.  The type is SqlMembershipProvider, connection string name is “AspNetSqlProvider”, and the application name is “/”. 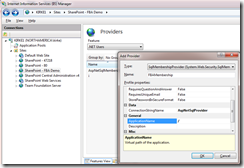 Click the “SharePoint Central Administration v4” node and make the same edits to its configuration, adding the FBAMembership and FBARoles providers as described above.

In the previous section, we added configuration for connection string, membership, and roles to our web application.  We also need to add these settings for Central Administration so that we can add our forms-based authentication users as site collection owners (among other settings).

We need to make a few small tweaks to the configuration for Central Administration because there isn’t a way (that I could find, anyway) to do this using the MMC console:

While we are editing the web.config for Central Administration, there’s one more thing that we need to be sure to add.  We need to enable wildcard searches for our users when using the People Picker control.  This section is located under configuration/SharePoint/PeoplePickerWildcards.

Just like we did with Central Administration, we need to set the default providers for the Secure Token Service Application.  Open the web.config file at:

You will need to add your connectionStrings section and a web.config section.  A partial listing showing the configuration that needs to be added:

Click Add Users.  You are then asked what zone to configure users for, choose “Default” and click Next.  In the Choose Users section, you should be able to enter “adminfba” and the name will resolve.  Alternatively, you can click the phone book icon to search for users in the address book.  Enter “a” and you will see something like the following, showing our Forms Auth user. 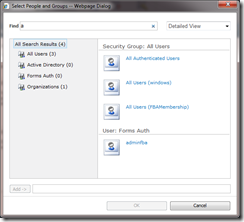 Select the adminfba user and give that user full control. 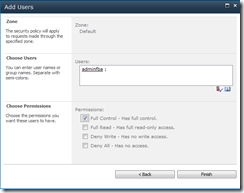 The result in the policy window shows our user with the user name “i:0#.f|fbamembership|adminfba”.

Open up your new web site, you will see the following screen:

You are now logged into your site as adminfba, with site administrator privileges (note the Site Actions menu contains privileged capabilities).

We gave the adminfba user full control of the application, so we can set things like security groups up.  You can add the FBAAdministrators group into the “FBA Demo Owners” group as site owners. 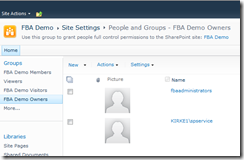 You can also add the FBAUsers group into the “FBA Demo Visitors” group.

Once you have done that, log out and log back in as “kirkfba”, recalling that “kirkfba” is in the FBAUsers role, which we added to the “FBA Demo Visitors” group in SharePoint.  As you can see, this user has limited capabilities, such as less capabilities in the “Site Actions” menu.

There is a lot of verbiage and quite a few screen shots in this post.  If you think I missed a step or need to elaborate further, please leave a comment!  As it turns out, there really is not that much work to this after you walk through it the first time.  The steps are:

Setting up FBA Claims in SharePoint 2010 with Active Directory Membership Provider – this post is pretty verbose and easy to follow.