Wanted to let everyone know that today we pushed an update to our Visual Studio extension for Logic Apps. With it we've included the ability to associate an Integration Account to the Logic Apps you create in Visual Studio which in turns lets you use our B2B and XML actions from Visual Studio including the following:

As an example, here's a quick logic app you can now build entirely from within Visual Studio. When I create a new Azure Resource Group project type and select the Logic Apps template I get a new logic app template in my project. Right-clicking this and opening in the Logic Apps designer I can choose from the gallery: 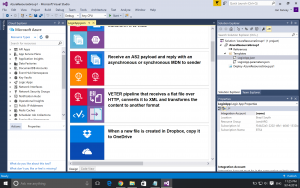 Here I'll pick the VETER pipeline template and voila, I have a logic app created from it in Visual Studio. 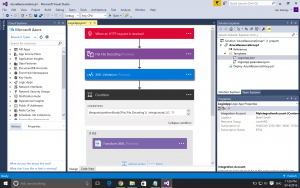 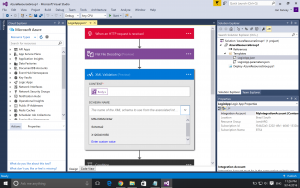 Once I'm done I can save and deploy my logic app as normal - it's as easy as that!

As always, let us know what you think and what you'd like to see next.