The MicrosoftML package is currently available in Microsoft R Server for Windows and in the SQL Server vNext.

In this article, we will walk through a simple prediction task (Binary classification) using NYC Taxi dataset : Predict whether or not a tip was paid for a trip, i.e. a tip_amount that is greater than $0 is a positive example, while a tip_amount of $0 is a negative example. We will be using the different algorithms available in the Microsoft ML Package to fit the model and also find the best fit model using AUC (Area Under ROC Curve). The Azure Data Science Virtual Machine is very helpful for running this prediction task, since it comes pre-installed with our requirements : SQL Server 2016 SP1 Developer edition with R Services, MicrosoftML Package, Jupyter Notebooks, NYC Taxi dataset pre-loaded in SQL Server database called nyctaxi.

Once you provision a Data Science VM in Azure, remote desktop into the machine and open SQL Server Management Studio (there will be a desktop shortcut) and connect to the local SQL Server Instance. Expand Databases to view the nyctaxi DB. We will be using [dbo].[nyctaxi_sample] table as dataset. 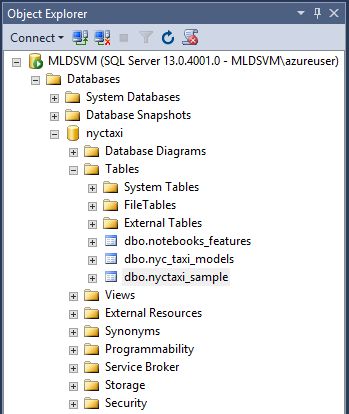 We shall use Jupyter Notebooks to run R code. In Data Science VM, you can configure Jupyter Notebooks using the Desktop Shortcut JupyterSetPasswordAndStart.cmd. Once configured, just open browser and hit https://localhost:9999. Create a new Notebook with R (say MicrosoftML_NYC_Taxi_Tip_Prediction.ipynb) :

NOTE : You can use any environment to run the R code in this article – Jupyter Notebooks, RStudio Desktop, R Tools for Visual Studio, SQL Server Management Studio (using sp_execute_external_script).

There are 8 steps in this experiment :

Load the table [dbo].[nyctaxi_sample] from nyctaxi DB into a data frame in R. rxGetVarInfo() function provides some details about the columns. The column “tipped” has values 0 (tip_amount = 0) and 1(tip_amount > 0).

Split the loaded NYC Taxi Dataset into Train(75%) and Test(25%). Training data is used to develop the model and Test data will be scored using the developed model. Use rxSummary() to get a summary view of the Train and Test Data. 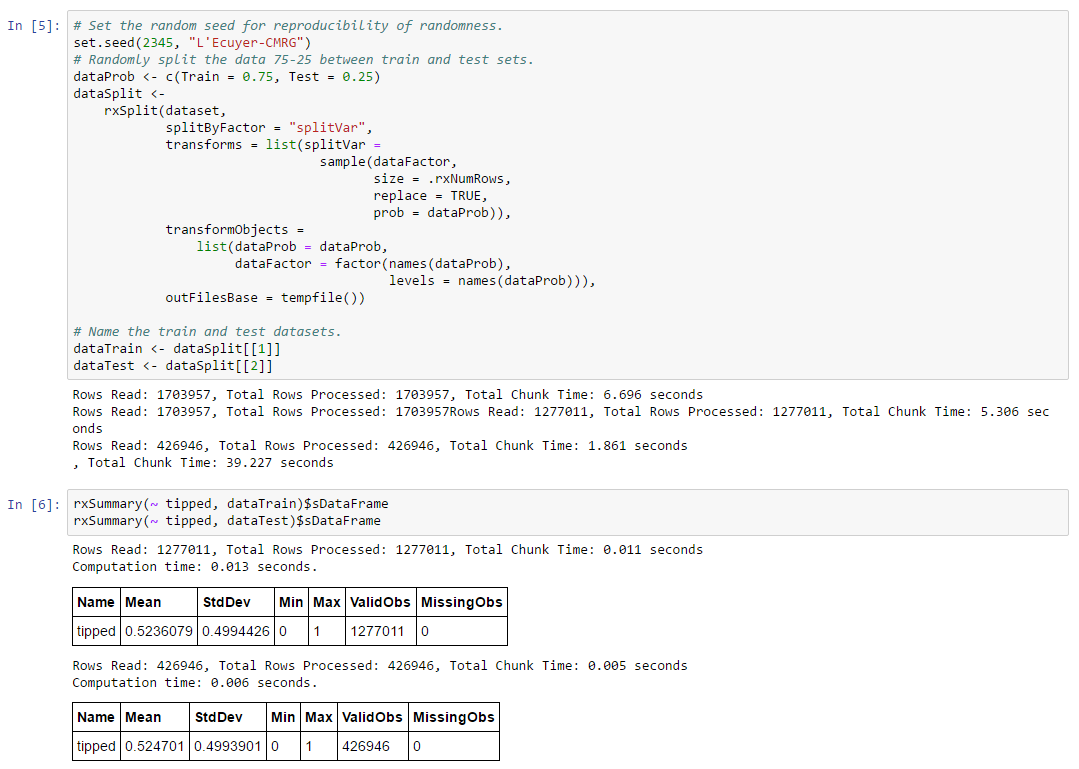 The model is a formula that says that value of “tipped” is to be identified using Features like passenger_count, trip_time_in_secs, trip_distance, total_amount. We are just using the four numerical columns available in the dataset as features. There are better ways to perform feature selection.

We will use the following five algorithms/functions from MicrosoftML package, which support Binary Classification Task, to fit the model:

Logistic regression: The rxLogisticRegression() algorithm is used to predict the value of a categorical dependent variable from its relationship to one or more independent variables assumed to have a logistic distribution. The rxLogisticRegression learner automatically adjusts the weights to select those variables that are most useful for making predictions (L1 and L2 regularization).

Fast Linear model (SDCA): The rxFastLinear() algorithm is based on the Stochastic Dual Coordinate Ascent (SDCA) method, a state-of-the-art optimization technique for convex objective functions. The algorithm can be scaled for use on large out-of-memory data sets due to a semi-asynchronized implementation that supports multithreaded processing. Several choices of loss functions are also provided and elastic net regularization is supported. The SDCA method combines several of the best properties and capabilities of logistic regression and SVM algorithms.

Fast Tree: The rxFastTrees() algorithm is a high performing, state of the art scalable boosted decision tree that implements FastRank, an efficient implementation of the MART gradient boosting algorithm. MART learns an ensemble of regression trees, which is a decision tree with scalar values in its leaves. For binary classification, the output is converted to a probability by using some form of calibration.

Fast Forest: The rxFastForest() algorithm is a random forest that provides a learning method for classification that constructs an ensemble of decision trees at training time, outputting the class that is the mode of the classes of the individual trees. Random decision forests can correct for the overfitting to training data sets to which decision trees are prone. The rxFastForest learner automatically builds a set of trees whose combined predictions are better than the predictions of any one of the trees.

Neural Network: The rxNeuralNet() algorithm supports a user-defined multilayer network topology with GPU acceleration. A neural network is a class of prediction models inspired by the human brain. It can be represented as a weighted directed graph. Each node in the graph is called a neuron. The neural network algorithm tries to learn the optimal weights on the edges based on the training data. Any class of statistical models can be considered a neural network if they use adaptive weights and can approximate non-linear functions of their inputs. Neural network regression is especially suited to problems where a more traditional regression model cannot fit a solution. 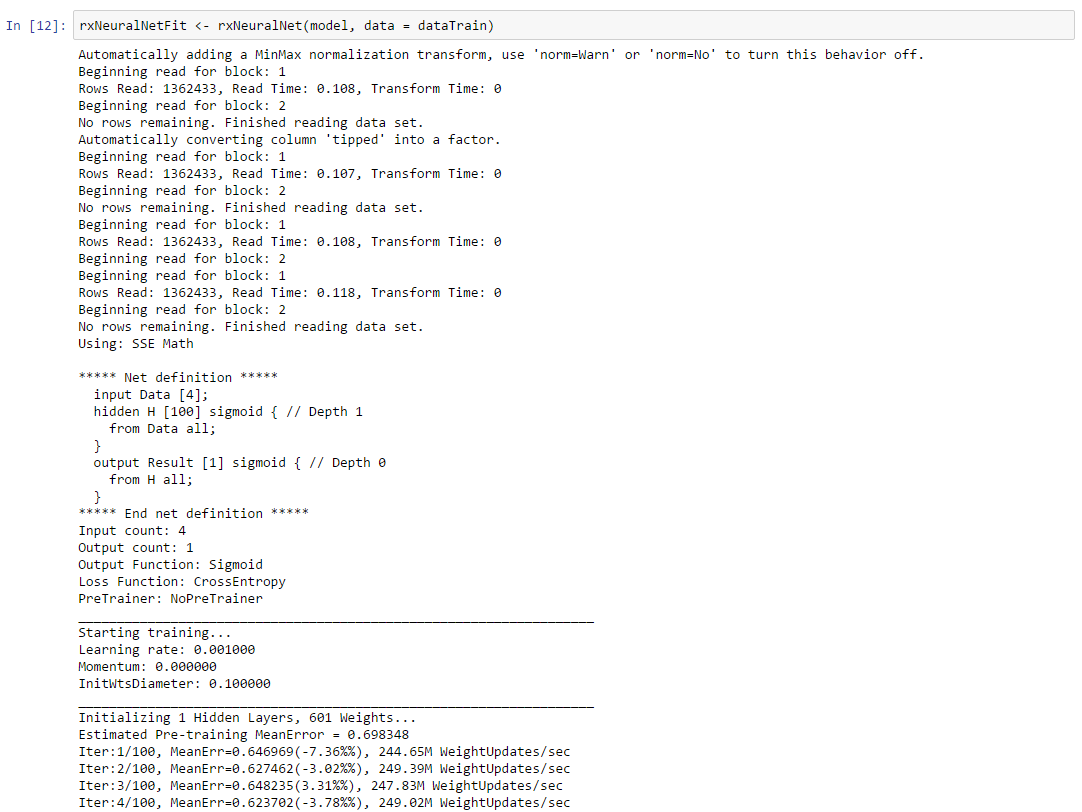 (it runs for 100 iterations, cropping image to save space)

Using rxPredict() function, we will score the Test Data using the models created in previous step. The predictions are put into one table for side-by-side plotting and comparison. 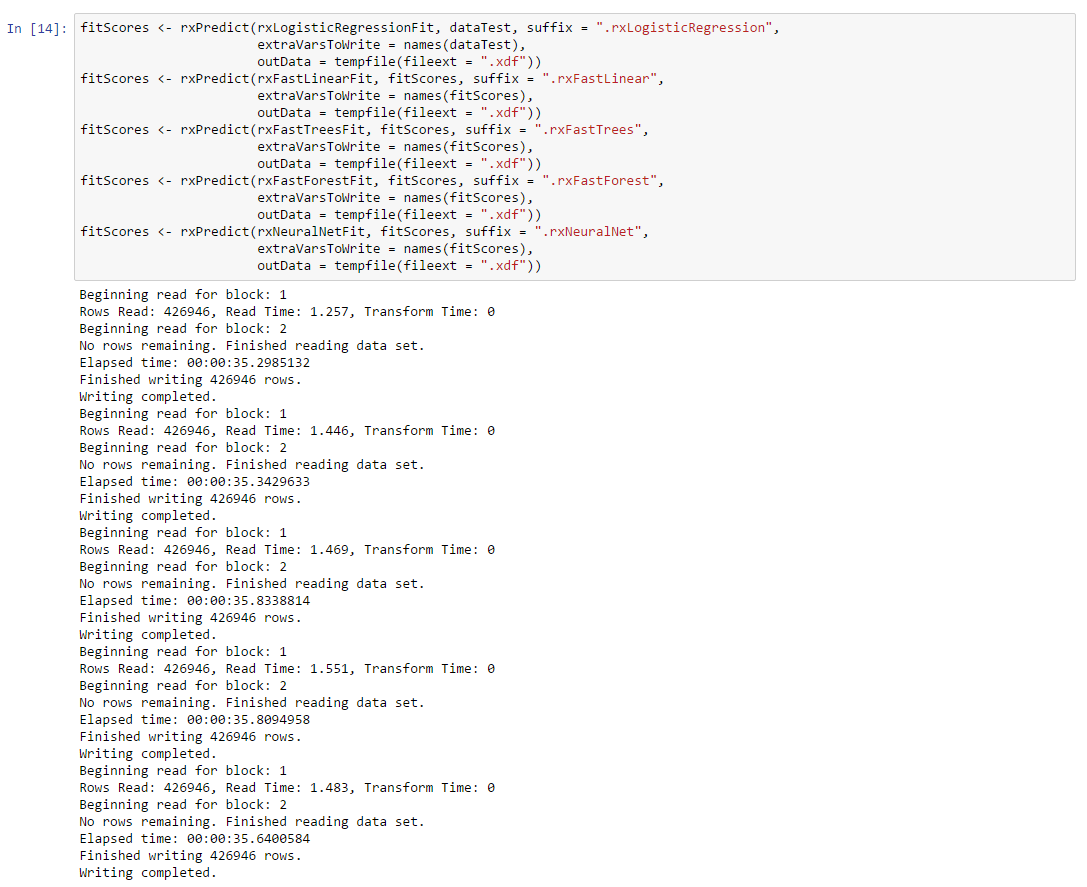 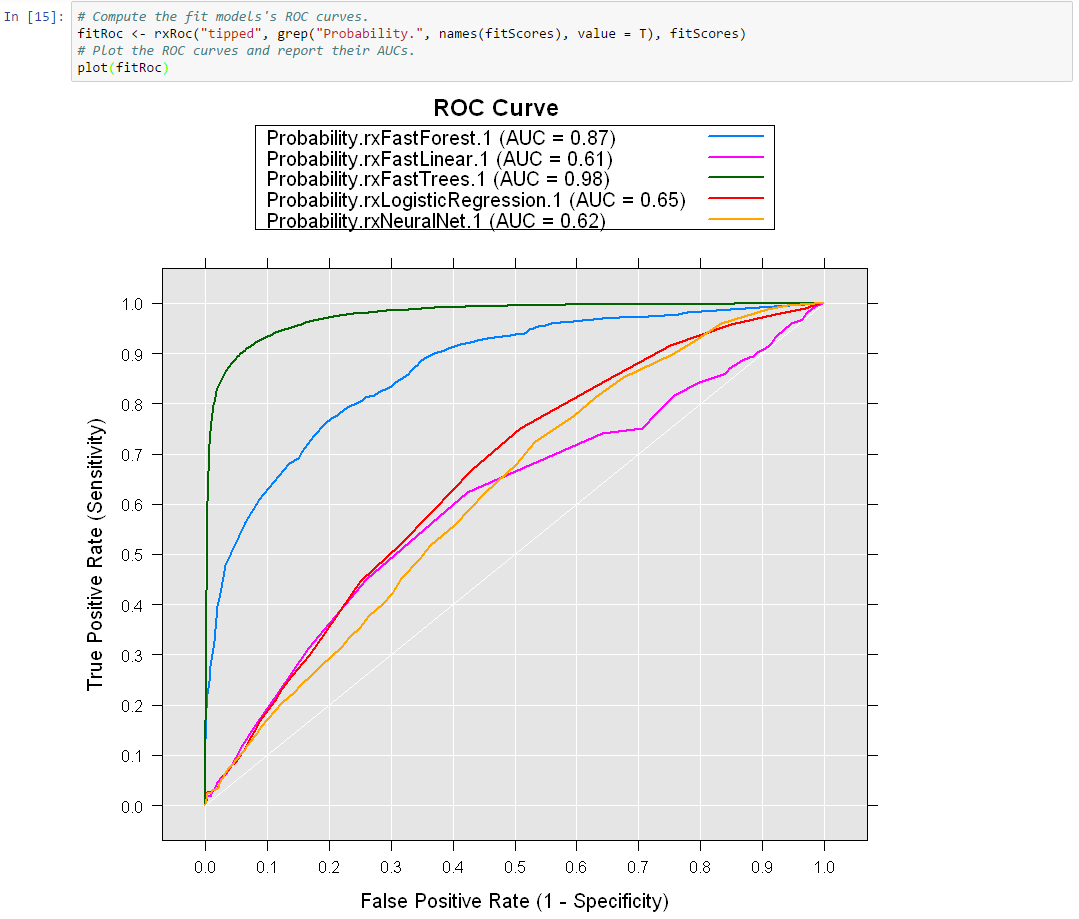 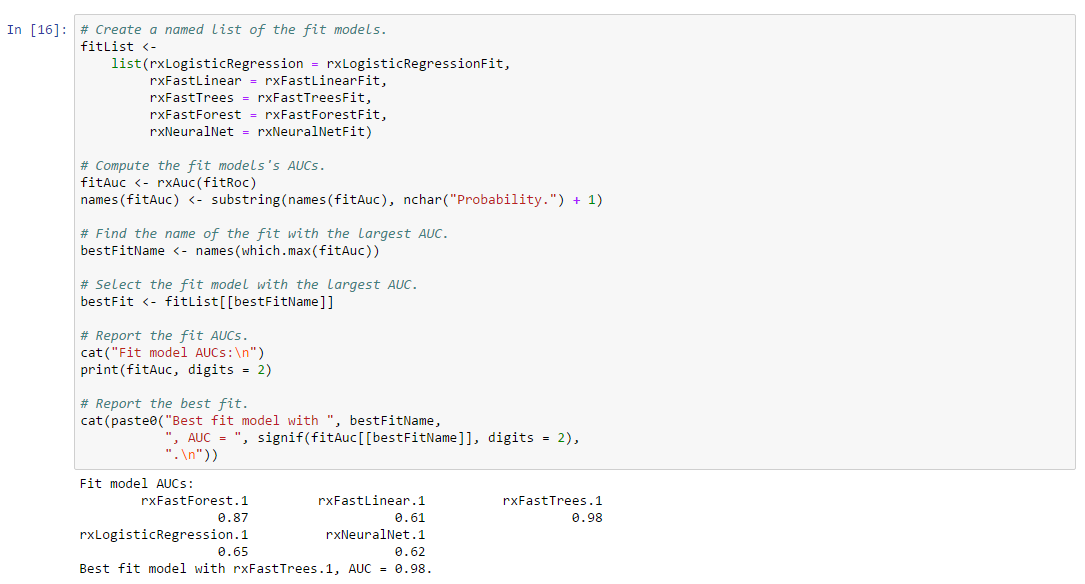 The Best Fit model is found to be rxFastTrees with AUC = 0.98

Here is the complete R code, if you wish to run it in RStudio Desktop or R Tools for Visual Studio  :

You can also run it in SQL Server Management Studio using sp_execute_external_script, here is a sample :

NYC Taxi Data The Area Under a ROC Curve

Ten things you can do on the Data science Virtual Machine