How does the solution work?

NPM uses synthetic transactions (TCP ping, which is explained later in this post) as a primary mechanism to detect and locate network performance bottlenecks. The solution detects IPv4 and IPv6 subnets that are directly connected to the machines on which the OMS agent has been installed and uploads this information to OMS.

All agents know the other agents that they should ping and note the packet retransmissions and roundtrip time that is encountered for each ping. This data is used to determine the packet loss and network link latency that is then uploaded to OMS, aggregated by the service, and presented to you on solution dashboard.

The following diagram sums up how the solution works 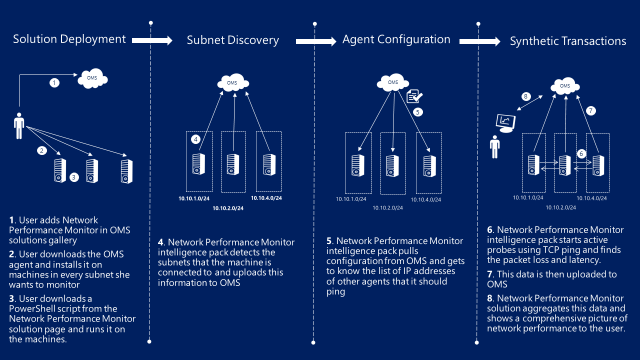 You may be wondering why we aren’t using the usual internet control message protocol (ICMP) ping instead of TCP. One reason is that routers do not give the same priority to ICMP traffic as they do to TCP packets. Consequently, ICMP-based pings might provide incorrect results in certain scenarios. Another reason is that HTTP is based on TCP. If we measure TCP performance, we get a good handle on how application response time is affected by the network.

A point to note here is that these pings use almost negligible bandwidth because only TCP control packets are exchanged and no data packets are transmitted for pings.

Before we talk about the monitoring model, let me explain some of the terminology.

A node here represents the machine (VM or host) on which the NPM solution has been enabled. Connectivity between two network nodes is represented by respective node links.

After NPM is deployed and configured, you can see a quick snapshot of the network health on the OMS homepage. The solution tile shows a doughnut chart that depicts the number of healthy and unhealthy subnetwork links. 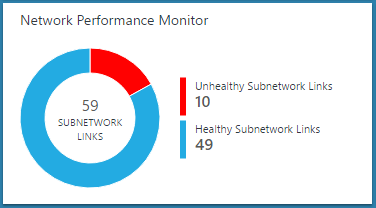 Click this tile to go to the solution dashboard.

The solution dashboard provides a quick glance of what’s happening in your network. The first blade shows a summary of your network: Number of subnetworks discovered (and their network-wise distribution), network links, subnet links, and paths in the system. A path consists of the IP addresses of two agents and all the hops between them.

The Top Network Health Events blade provides a list of most recent health events in the system and the time since the event has been active. A health event is generated whenever the packet loss or latency of a network or subnetwork link crosses a threshold.

The Top Unhealthy Network Links blade shows a list of unhealthy network links. These are the network links that have one or more adverse health event for them at the moment. 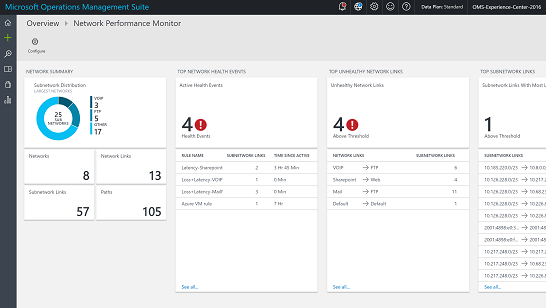 The Common Queries blade contains a set of OMS search queries that you can use to fetch the raw network monitoring data directly. You can use these queries as a starting point to create your own queries for customized reporting. 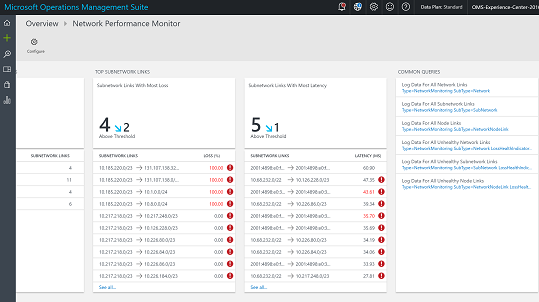 You can now see individual node to node links and find the unhealthy node links. 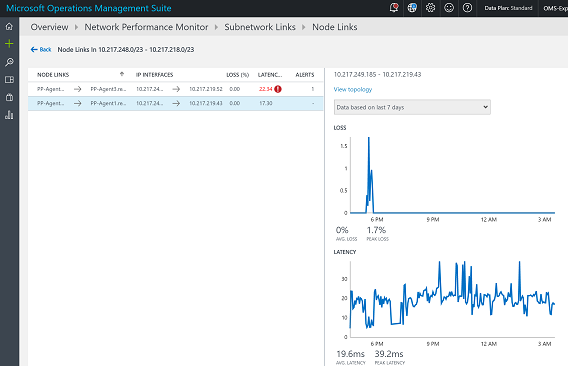 If you click the View topology map link, you will see the hop-by-hop topology of the routes between the source and destination nodes. The unhealthy routes or hops will be colored in red, which will help you to quickly localize the problem to a particular section of the network. 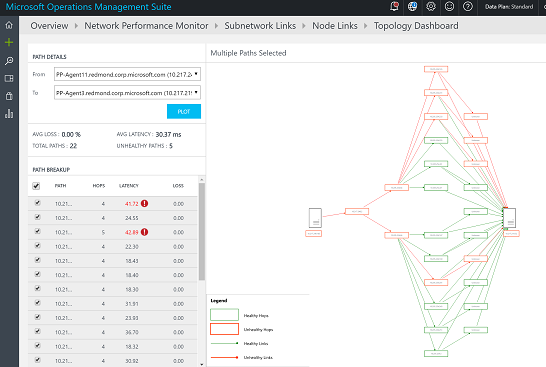 You can easily investigate the usually difficult-to-detect transient issues, which are manifested as sudden spikes, by analyzing the trend of loss and latency for a link. You can change the time windows for which the graph is plotted by using the time control at the top of the chart. 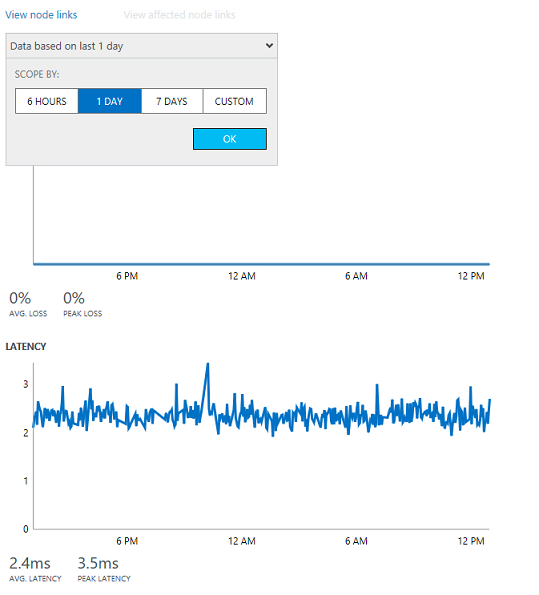 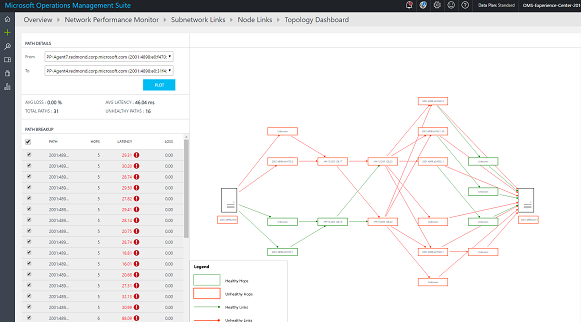 All the data that is exposed graphically through the NPM dashboard and drill-down pages is also available natively in OMS search. You can directly query this data by using OMS query language and create custom reports by exporting the data to Excel or Power BI. The last blade in the NPM dashboard has some useful queries that can be used as the starting point to create your own queries and reports. 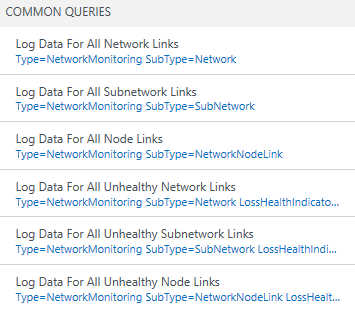 That is all I have for you today. Join me next time when I talk about what’s coming next with the Network Performance Monitor in OMS.

For more information on this new solution, please visit the Operations Management Suite documentation webpage or sign up for a free trial. Follow us on Twitter @MSCloudMgmt.