Prasad Kulkarni is a Reconnect Member passionate about Microsoft .NET technologies. You will usually find him active in discussion groups, or writing articles and blogs on various .NET aspects including VB, C#, ASP.NET, MVC and now Core. He was awarded Microsoft MVP in ASP.NET/IIS in 2014 and he said “I felt like my dream had come true.” Even as a Reconnect member Prasad continues to help developers, whether that be resolving their issues or boosting their knowledge on Microsoft Technologies.

After the MVP award period, Prasad began to miss that charm and energy that comes with being an MVP. This encouraged him to come back in as an MVP Reconnect member and he immediately felt welcomed back into the community -  “Once an MVP, always an MVP!”

On discussing the MVP Reconnect program Prasad told us; “The Reconnect program is really 'RE-Connecting' ex-MVP's again. Through monthly tech calls, webinars on different aspects and Yammer groups contribution, Reconnect gives us a chance to participate in more ways than not. Last year I personally attended the MCC event in India. I also love attending tech calls, and I am now focusing on contributions towards Yammer.”

Prasad recently created a discussion group in Yammer called “DX -ASP.NET, MVC, Core, IIS, VS”. The group began with one member and now has 105 members and counting, which really shows the power that the MVP Reconnect community has. Prasad also strives to contribute at least two to three blogs or write ups each week.

He added, “With so many former MVPs now in decision making positions in organizations (CEOs, CTOs, etc.), the Reconnect community allows us all to gather under one roof. Due to monthly calls, tech chats and offline meetups, I am feeling that glamorous, catching atmosphere again. I personally benefit immensely from being an MVP Reconnect; I can connect to lots of experts from different technologies.”

Prasad is currently working on an application which he has created using .NET Core (Run on MacOS, Windows). His aim it to connect two different SQL databases in transaction scope - with his single code working for both Mac and Windows.

Here is what he had to say to new MVPs; “Dear New members: You are in the golden MVP era, where you can dream anything about technology and you will get it. This platform gives you lot of knowledge, opportunities to meet your dream people, upcoming technical things and technical conferences. Just grab these moments. You can learn, and you can share your valuable knowledge towards Microsoft technologies. Help other people to make our community great, and if you have any doubts or suggestions; MVP leaders are always there to assist you.”

To learn more about the MVP Reconnect Program click here. 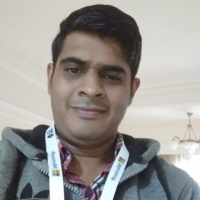 Prasad Shrikant Kulkarni is a Microsoft Reconnect member from Pune, India. He was awarded Microsoft MVP in ASP.NET/IIS in 2014. Check out his blog here.