We’re thrilled about the growing number of people who are using Microsoft Office every day to get things done at work, at home, at school and on the go. For instance:

On the heels of such positive momentum, we’re excited to talk about big improvements in the way we’ll deliver the next version of Office to consumers.

Along with the great product innovations we’re delivering in Office 2010, we’re introducing even more choice and flexibility for consumers in how they can try, buy and experience Office 2010 on new and existing PCs. This includes: 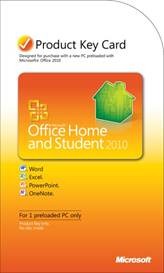 For consumers who purchase a new PC, Microsoft is working with major PC manufacturers and our retail partners to make it simpler than ever to try and buy Office 2010.

Through our retail partners, Microsoft is introducing an all-new Product Key Card to help consumers more easily access and experience Office 2010 on new PCs that have been pre-loaded with Office 2010. The Product Key Card is a single license card (with no DVD media) that will be sold at major electronic retail outlets.

An added bonus: The card’s packaging is smaller than the full package (DVD) product, and is eco/retail-friendly. The key number contained on the card will unlock Office 2010 software that has been pre-loaded by the PC manufacturers on their PCs, and enables a simpler and faster path for consumers to begin using any one of three full versions of Microsoft Office – Office Home & Student 2010, Office Home & Business 2010, or Office Professional 2010.

For people who want to try or buy Office 2010 on existing PCs, Microsoft is unveiling Click-to-Run, a new and enhanced download experience for consumers. Click-to-Run makes it easier than ever for customers to try or buy Office digitally by significantly reducing the time and effort required to download Office 2010 over the Internet. Click-to-Run automatically downloads and installs any software patches when connected to the Internet, helping people maintain and keep their Office software up-to-date. Click-to-Run uses virtualization technology so it allows customers to maintain multiple versions of Office. This enables them to try Office 2010 side-by-side with the existing version of Office.

We will have the broad beta of Office 2010 later this year and invite people to become familiar with Office 2010, in the way that works best for them, and then easily upgrade to a full version of Office Home and Student 2010, Office Home and Business 2010, or Office Professional 2010 when they’re ready to buy. To find out more information about Office 2010 visit www.microsoft.com/office2010.