The Extranet Lockout is a new feature available on Windows Server 2012 R2 ADFS when the Web Application Proxy is used. In a nutshell, it protects against password discovery attacks coming from the Internet... If you have no idea what I am talking about, here is an excellent article explaining how it works and how to enable it:

This is a feature I very often see enabled, yet not many are aware of its ultimate requirement. When this feature is enabled (by the way, it is not enabled by default), every password based authentication coming from a WAP server has to be verified by the ADFS server to ensure the lockout status of the account. The ADFS server does it by checking the value of the badPwdCount attribute for the user on... the PDC. Why the PDC? Because it is the domain controller with the most up to date value of this attribute. The badPwdCount attribute is not replicated, so other DCs than the PDC might have a lower value for this attribute.

The user is hitting the signon page on the WAP server, enters its username and password and hits Signin. The WAP server sends that request to the ADFS server. The ADFS server tries to locate the PDC on the network for the domain of the user:

Once the name is resolved, it does its LDAP ping (LDAP query over UDP to determine whether the server is reachable):

Then it starts talking LDAP...

What if the PDC is not available?

I'll keep it simple, as of today, if the PDC is not available, whether or not the password typed by the user is the correct one, the authentication will fail.

In the following example, the user AD\piaudonnmsdn will try to authenticate against the WAP signin page. The account is currently not locked out and the password entered is correct. 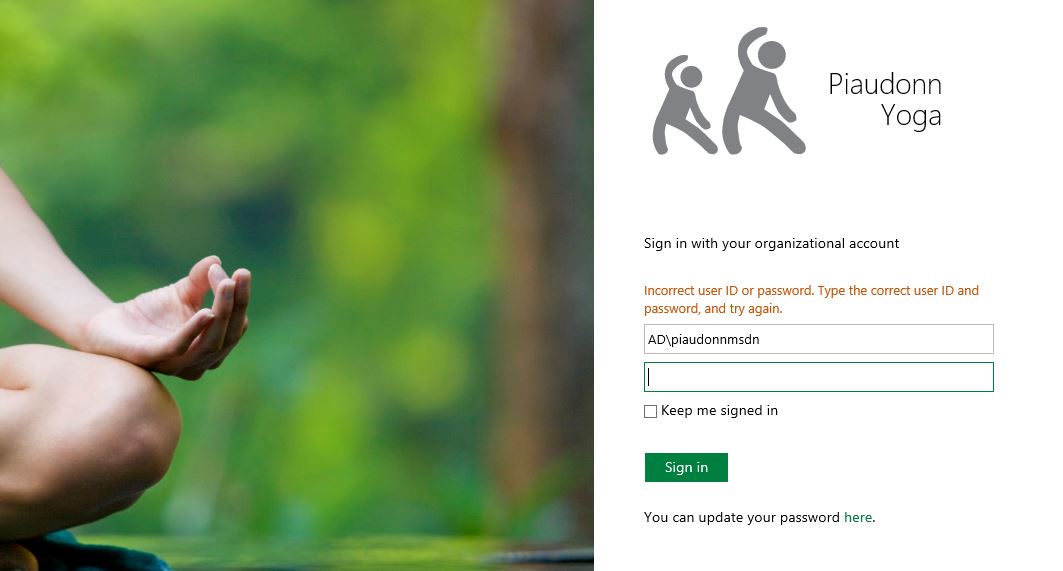 It's true that it isn't that obvious, looking at this error message, that the reason of the authentication failure is the unavailability of the PDC. If you retry with the debug logs enabled, here is what you see:

This time, no doubt about the root cause. The function GetPDCName returned an error 1355:

Yes, time to discuss the scary acronym. The extranet lockout is a protection against password discovery and denial of service attacks. As such, it is a security feature. The single point of failure related to the PDC requirement has to be seen as a risk too. So it is your call to decide if the SPOF outweighs the security risks of the attacks aforementioned. Things you need to take in consideration:

Maybe the PDC is up and running, however your ADFS servers are in a network segment that can talk to only few DCs and not the PDC. If you have several domains within your forest or if you have some trusted domains, your ADFS servers also have to be able to contact them. So what if you have a firewall in between? Well, in that case you can create some rules to allow the following traffic:

This is enough to enable to badPwdCount lookup.