Windows 2008 R2 - Groups, Processors, Sockets, Cores Threads, NUMA nodes what is all this?

Windows 2008 R2 - Groups, Processors, Sockets, Cores Threads, NUMA nodes what is all this?

Industry Standard Architecture (ISA) technologies have progressed extremely rapidly in the last 10 years.  Both Intel and AMD based systems are dramatically different than even just 5-6 years ago.  Ten years ago servers usually had either 2 or 4 physical processors plugged into sockets on the server motherboard.  The typical memory installed in these systems was 1-2GB, with very few ISA based systems supporting 8 or more processors.   The Windows operating system displayed each CPU as one bar in Windows Task Manager. The machine architecture also was very simple with each processor having the same access latency to memory and other resources.

Today ISA servers have increased exponentially in processing capacity to be on par with high cost proprietary UNIX system and complexity.  These developments and the associated terminology tends sometimes to confuse people a little.  The implications for software licensing of the Windows operating system and SQL database is sometimes unclear.

Today SAP on Win/SQL customers routinely run on servers with 8 processors, 128 logical processors and 512 GB of RAM is nothing unusual. Even on 4 processor commodity Intel servers such as the HP DL 580 G7 we have customers with 512GB RAM.  Typical 2 CPU servers are now configured with 128GB of RAM and have 24 logical processors.  Let's go through some terms:

Sometimes referred to as "CPU" or "Socket".  This is the packaged physical piece of silicon that contains all the cores and required shared components.  The CPU is the package of components that needs to be put in the processor socket on the motherboard. Besides the multiple cores which are contained on each processor, the current generation of processors by AMD and Intel contains the Memory Controller and the bus to external memory which is administrated by this one processor. In the Windows and SQL Server space, we use the term socket or processor side by side also due to Microsoft's per socket or per processor licensing.

Microsoft products are licensed per "CPU" meaning per physical processors plugged into sockets on a server motherboard.  Microsoft does not license per CPU core in contrast to Oracle and IBM.  This means the licensing is based on per socket base independent of the number of cores. The maximum number of Processors Windows Server 2008 R2 can address depends on the edition.  For Data Center Edition it is 64 Processors and 256 logical processors
SQL Server 2008 R2 Enterprise Edition allows a maximum of 8 sockets/processors and up to 256 Logical Processors.   Customer with more than 8 processors/sockets and up to 256 Logical Processors SQL Server 2008 R2 Datacenter Edition is required.  This link has more information on SQL Server Editions and features.

Intel & AMD both observed that the physical limitations of CPU manufacturing processes and materials meant that increasing Processor clock speed too much over 3GHz resulted in several unwanted side effects.  The most apparent side effect was heat.  In order to continue to exponentially improve performance Intel and AMD added multiple CPU cores onto each CPU.  Sometimes these CPU cores shared L3 caches and other components.  All of these CPU cores were integrated onto one physical processor and plugged into one socket on the server motherboard.  Today servers with 6-,8- and 12-core processors developed by AMD and Intel are commonly deployed in our SAP customer base we monitor.  Today proprietary UNIX hardware has followed the Intel & AMD multicore approach after some years attempting to increase CPU speeds to 5GHz or higher.

Each node on a Non-Uniform Memory Access based system is a collection of processors which accessed the same memory. Usually a hardware architecture had more than one NUMA node which was connected via Bus or other topologies. Each NUMA node had its own memory. Applications running on one NUMA node, but accessing memory on the other NUMA node usually encountered longer latency, this in turn greatly reduces performance. Therefore Windows 2003 and SQL Server 2005 included a lot of optimizations to reduce 'remote' memory access to a minimum. Today the unit of a NUMA node is usually one processor or socket. Means in most of the cases there is a 1:1 relationship between a NUMA node and a socket/processor. Exception is AMDs current 12-core processor which represents 2 NUMA nodes due to the processor's internal architecture. All new ISA servers are NUMA based after Intel stopped using Front Side Bus technology on Nehalem processors with Quick Path Interconnect.  AMD have used Hyper-Transport for some years already

In order to get beyond the former Windows limitation of supporting a maximum of 64 Logical processors, a new grouping system was designed. This Unit is a Processor Group or short 'Group' Each processor group can contain a maximum of 64 Logical Processors. In order to get to the current supported limit of 256 Logical processors, four processor groups are defined by Windows 2008 R2. More details can be found here: https://msdn.microsoft.com/en-us/library/dd405503%28VS.85%29.aspx

This graphic displays the hierarchy: 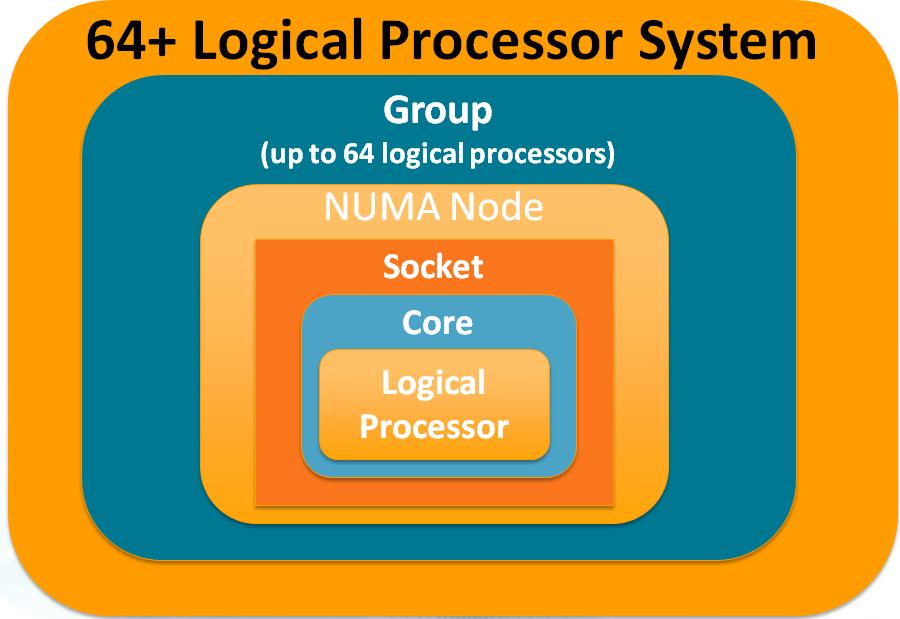 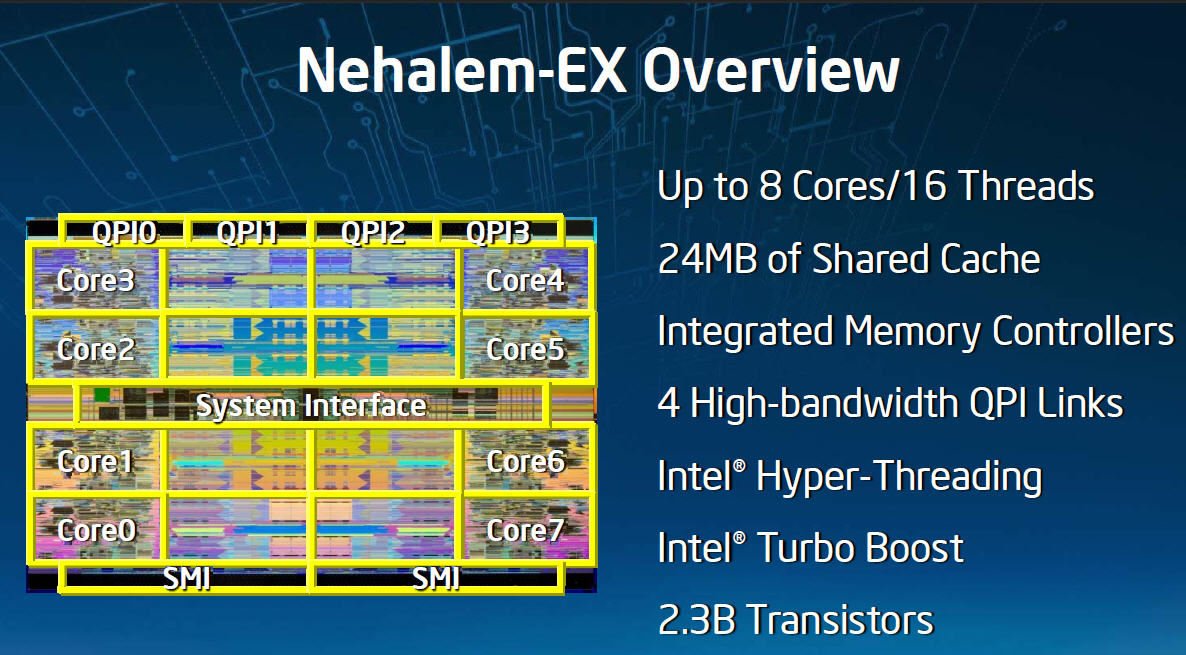 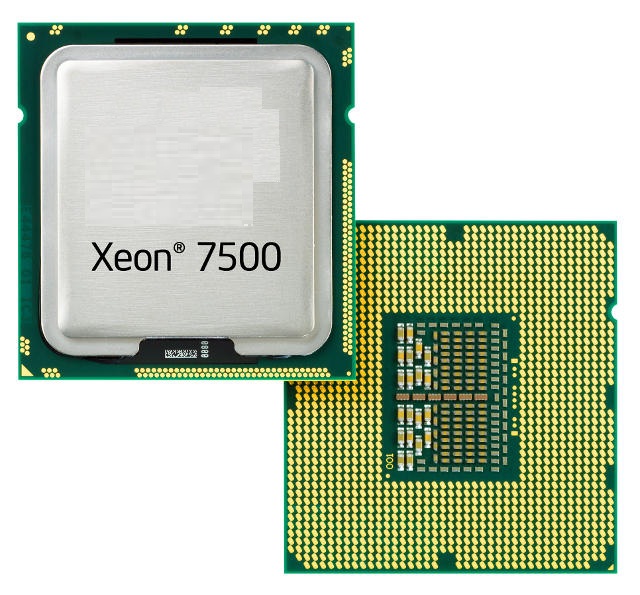 Let's look at a server which has 8 Intel Xeon 7560 CPUs. Let's assume Hyperthreading is enabled. Then we look at:

Let's compare that with a server having 2 brand new AMD Opteron 6174 where we look at:

Hope this explains the terms were using a bit. Oh yes, what about the term 'CPU'? Good question. We are seeing it used all over the place. In the most common usage we still see it used for what we defined as the Logical Processors. However we also find it used quite a lot for what we defined as socket/processor. Therefore if somebody talks about a server with x number of CPUs, better ask what really is meant.