The Evolution of DevLabs

A little over four years ago, we created the DevLabs portal on MSDN.  The idea behind this site was to provide a hub for Microsoft teams to publicly share prototypes of innovative tools for developers, showcasing and gathering feedback on technologies that were in their early stages.

In the time since, we’ve seen a wealth of exciting projects come and go, many eventually moving in one way, shape, or form into Microsoft products.  For example, DevLabs was the initial home for Code Contracts, a general design-by-contract mechanism from Microsoft Research for .NET programmers.  The library support for Code Contracts then shipped in the .NET Framework 4, and the Microsoft Research (MSR) team behind it has been actively researching and investing in the associated testing, verification, and documentation tools.  As another example, DevLabs was the home for Axum, a .NET language for building parallel applications.  Axum itself was later retired from DevLabs, but not before some of its core concepts were adopted by mainstream development technologies; for example, the asynchronous programming support in C# and Visual Basic in Visual Studio 2012 was initially prototyped in Axum.  From CHESS to PEX to Reactive Extensions to "Casablanca" and beyond, some very useful technologies have gotten their start on DevLabs over the last few years.

At the same time, the development landscape has been evolving.  It’s become increasingly simple for anyone to codify their ideas and quickly deploy solutions in order to share concepts and learn from experiments.  In conjunction, multiple sites have sprung up to facilitate this, whether for sharing source code, such as with CodePlex, or for sharing tools and extensions, such as with the Visual Studio Gallery.  These sites are often integrated with the developer’s environment, such as with Visual Studio Gallery integration into Visual Studio through the Extensions and Updates dialog, providing easy self-service support for a developer to push an update out to millions of consumers of their work.

With these advances, it’s time to evolve the DevLabs experience.  Starting today, we’re redirecting the existing DevLabs portal to a new DevLabs collection in the Visual Studio Gallery.  When you browse the gallery, you’ll find a Microsoft collection that includes official releases from Microsoft (such as the NuGet Package Manager, the Productivity Power Tools, or the Team Foundation Server Power Tools), but you’ll also find a new Microsoft DevLabs collection.  As was the case with the previous DevLabs portal, this is an outlet for experiments from Microsoft, experiments that represent some of the latest ideas around developer tools. This new site will enable more teams from Microsoft to more quickly share their latest thinking, and to do so in a manner that works seamlessly with developers’ day-to-day workflows.

As an example, a tool available in the Microsoft DevLabs category today is the “Inline Navigate To” extension.  With Visual Studio 2012, developers can use the Navigate To dialog to navigate to a file or symbol, and this new extension aims to improve on that experience, with better performance, better results relevance, improved filtering capabilities, and improved UI aesthetics, including a modeless UI.  Give it a test drive today and provide feedback to the team on whether and how you’d like to see such improvements included in a future Visual Studio release. 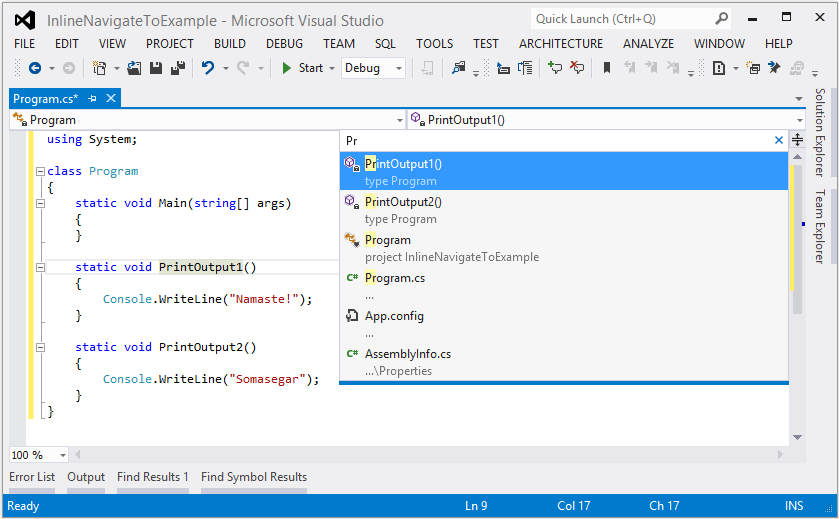 We look forward to evolving this Microsoft DevLabs collection with new ideas and solutions as we have them available.