Had an interesting scenario recently while working with a large customer with a LOT of locations. The challenge was that they needed to stage imaging content on local servers at each location to facilitate imaging without overloading the network links. OK, easy – right? The twist was that they could not make the local servers distribution points in any way. For various reasons they also were not able to implement BranchCache or third party equivalents. They were also not on ConfigMgr Current Branch which would at least give them Windows PE caching. Thankfully ConfigMgr 2012 was in place!

ConfigMgr 2012 SP1 introduced the SMSTSDownloadProgram variable which I had overlooked completely. It is easy to overlook something until you need it!

A quick glance at the documentation for this variable leaves a big question though. How exactly is this variable used and how does it actually work? To test a demo of the approach was created. After a bit of trial and error it actually worked! The hardest part about this was getting the full concept. Implementing is very easy. Read on to see how this was accomplished but be aware that there could be several other ways in which the alternate content provider could be effectively implemented. The example is just one of them.

At the point the task sequence engine needs content it will attempt to look it up. Normally this would be through standard content lookup mechanisms. If the SMSTSDownloadProgram variable is defined the task sequence believes the alternate content provider is configured and will ignore normal content lookup processes and, instead, will hand off content acquisition to the alternative content provider by pass the program defined in SMSTSDownloadProgram two variables – the content ID and the location to store the content on the imaging system. The program referenced by SMSTSDownloadProgram will need to be able to handles these passed variables. The example shown shortly simply uses XCOPY.EXE as the executable. It’s simple but it works and is available in all builds of Windows.

The best way to illustrate using the alternative content provider is by an example.

The example assumes a complete separate source of content will be used during the task sequence. As such, that source needs to be created by building a share to store the content. In the example the share is called TSContent. Immediately in the share a folder called Packages is created and then, inside Packages, the content needed by the imaging process is staged. Building and maintaining the share used by the alternate content provider is a completely manual process. Note that the folder names of the content follow the ConfigMgr content ID format. The task sequence engine will reference the content by ID when it is requested from the alternate content provider. 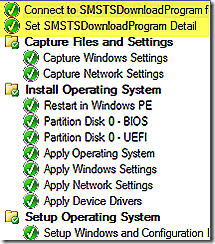 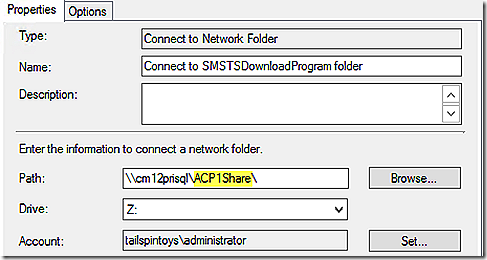 The contents of ACP1.cmd are really simple. As already mentioned, for the example XCOPY.EXE is being used so the cmd file simply calls it.

A couple of questions might be front of mind at this point.

· If the cmd file is simply calling xcopy why not just store xcopy in SMSTSDownloadProgram instead of wrapping it in a cmd file?

That is a great question. A couple of reasons come to mind.

o The task sequence engine makes use of the alternate content provider by passing variables to whatever is stored in SMSTSDownloadProgram. While it may be possible to do this with xcopy directly (don’t know, haven’t tried) it certainly is easier to conceptualize passing variables to a program – even if that program is just a cmd file.
o Leveraging a cmd file – or VBscript – or PowerShell – or EXE - or whatever – gives more flexibility. It’s possible to start really simple but expand later as needed.

An example to illustrate. After the sample described to this point was built a tweak was needed. Some systems being imaged had really small disks so there was not enough room to store all of the content needed during imaging. Using the alternate content provider script, it was possible to clear the cache on the imaging system at each step to remove any content remaining there since it was no longer needed. The ACP1.cmd was tweaked to accomplish this.

· What are these %’s for in the command line?

The second step in the process is to actually create and populate the SMSTSDownloadProgram variable which flags the task sequence to use the alternate content provider stored here instead of standard content lookup processes.

An entry similar to the following will be seen if the alternate content provider is being used:

An entry similar to the following will be seen each time the alternate content provider is called:

That’s it. Yet another way that imaging with OSD offers more flexibility and unique use cases.