I’m at the Code Generation 2009 conference in Cambridge, which started yesterday.

Numbers are a little down on last year, but not much. Attendance is mostly from industry, with some academics. As usual it’s stuffed full of people with tons of experience in building code generators and languages to drive them.

I gave a talk yesterday which placed model driven development and code generation in the wider context of what I called the design cycle (see image below). Perhaps I’ll write it up as an article on this blog someday. I also illustrated this with a demo of some of the features of Visual Studio 2010, including the new tools for visualizing existing code through graphs. 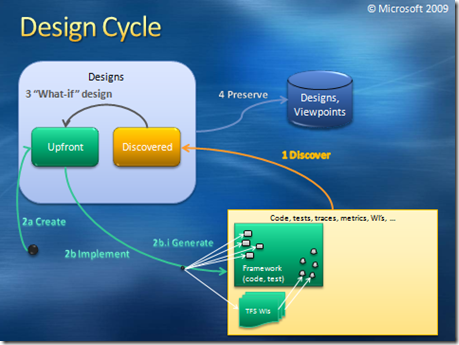 Interesting panel yesterday on migrating to model driven development. There is real, concrete data out there which demonstrates the productivity benefits of an MDD approach. Why is it, then, that everyone isn’t doing it? Lots of discussion, with the top reason being social and cultural issues. It was also suggested that tooling isn’t good enough for broad use.

I’m sitting in the keynote which has an interesting format: the two invited keynote speakers (Markus Völter and Steven Kelly) decided to join forces and give a joint talk spanning the two sessions. I like it, especially when the speakers argue (e.g. textual DSLs, which Markus favors, versus graphical DSLs, which Steven favors; actually they concluded that a platform which integrates and supports both would be best).