Recently we faced a scenario where a NFS share is created on a windows machine and UNIX client are trying to access it. (The behavior may be different based on the NTFS permission.)

Though UNIX showed full permission for the user; we were getting access denied while deleting the file in the NFS share! The investigation revealed a complex scenario.

This is based on our testing on our Lab machines:

The effective permission for the grp1 is as below. It has all permission except the one highlighted. 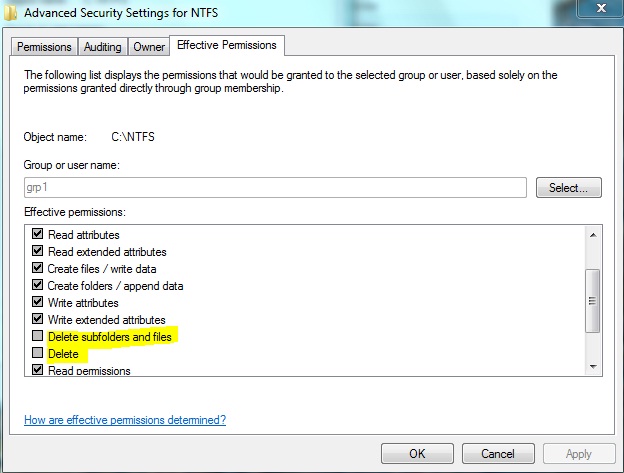 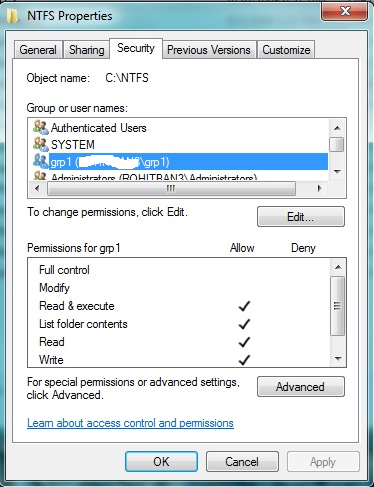 The logged in as user1 (this user is mapped to user1 on Windows box).

Permission for user1 on the "user1_unix" is RWX.

grp1 has the permission that was given to parent directory.

From UNIX though user1 has full rights on the folder which he created and is also the owner but still would not be able to delete it. Take a Netmon trace and you will see that rmdir call is being send over the wire with correct UID and GID. The consecutive reply shows the ‘err_access’ (permission denied).

Below is the input from the access reply call 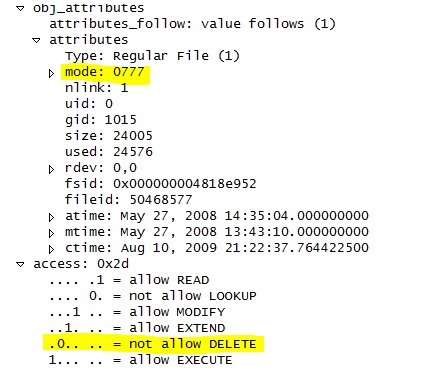 Below is the inputs from the delete call (RMDIR)

Now from the windows box if you create a folder under the NFS share logged in as User1 then you would see that user1 is the owner and has full NTFS permission and is also able to delete the folder.

And the above two conditions are true whether or not we are inheriting the properties from parent folder.

· If we remove the "delete subfolder" permission on NFS share for a user / group ; even if that user / group has explicit permission in some child folder in that NFS share; from UNIX side (even if we see RWX permission for that user) as that user we will not be able to delete the folder.

· From windows side when the users create a folder under the NFS share; he would be the owner and have full control in NTFS permission. Hence he would be able to delete the same.

Enabling KeepInheritance is recommended when files on NFS shares are meant to be accessed by both UNIX and Windows users and should be done on all the nodes in the cluster.

By default, the value of the KeepInheritance entry is 0, which means that newly created files and directories on NFS shares will not inherit ACEs from their parent directory. However, if an administrator wants to be able to read and write every file and directory created in a hierarchy, the administrator should set this value to 1 and set an inheritable read/write ACE at the root of the hierarchy.

You can refer to the TechNet article for the details on KeepInheritance.