Visual Studio (VS) 2015.3 does not detect any files added under the folder named 'Release' on Team Projects with Team Foundation Version Control (TFVC) on VSTS

We came across an interesting case where the user was having trouble adding new Visual Studio projects to TF version control.
After adding a new file, it was not being identified as a pending add (The plus sign that we were supposed to see with new add(s) before check in on the Solution Explorer was missing).
This was happening to specific branch by name ‘Release’ created on Source Control

We were able to reproduce this locally, and found that it does not like the Folder created by the name "Release" on Source control.

There was a design change implemented for VS 2015 Update 3 to start honoring .tfignore and default exclusion rules for file adds inside VS.  This was requested by numerous customers who are used to using other source control systems (ex: Git’s .gitignore files).
The default exclusion rules include common generated build folders like (bin, obj, Debug, Release, etc).  This could cause problems for customers who have used an excluded folder like Release in their folder hierarchy.

We had to do the following to get this to work: 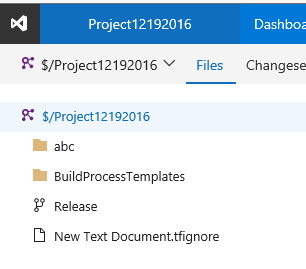 • To automatically generate a .tfignore file,

1. In the Pending Changes page, in the Excluded Changes section, select the "Detected" link.
The Promote Candidate Changes dialog box appears.
2. Select a file, open its context menu, and choose Ignore this local item, Ignore by extension, Ignore by file name, or Ignore by folder.
Choose OK or Cancel to close the Promote Candidate Changes dialog box.
3. A .tfignore file appears in the Included Changes section of the Pending Changes page. You can open this file and modify it to meet your needs. 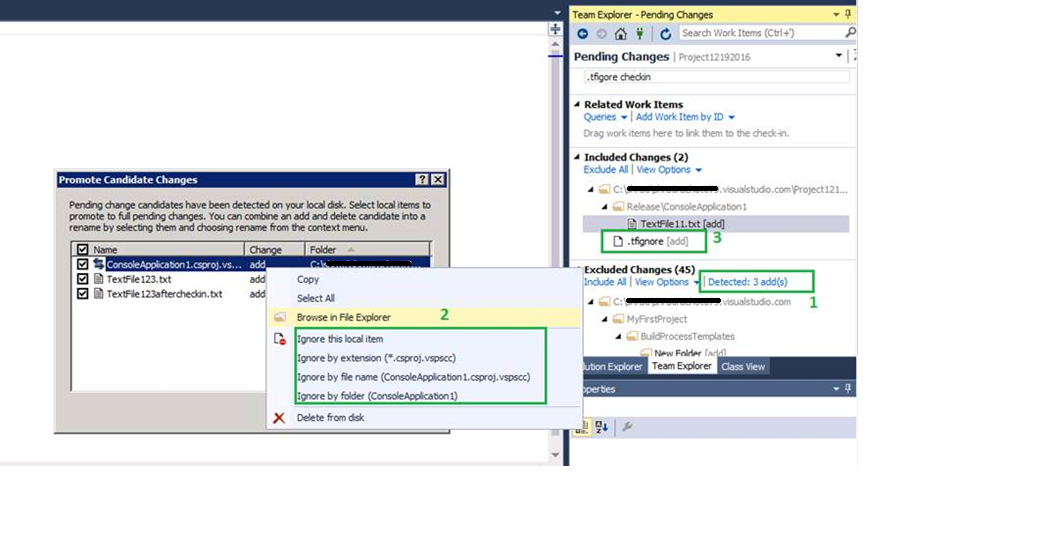 The .tfignore file is automatically added as an included pending change so that the rules you have created will apply to each team member who gets the file.
• The content of the file should be: