When you hear the phrase “green IT”, you know that the word virtualization will usually appear shortly afterwards. Virtualization provides the ability to consolidate your IT infrastructure from several physical computers (each of which has a basic power overhead) onto virtual computers running on significantly fewer host computers. The increase in power consumption for each virtual computer you run on the host is considerably less than the power overhead for each replaced physical computer. 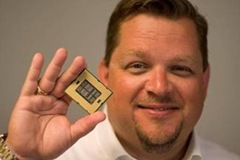 At this point, you can usually hear the sounds of hardware manufacturers rubbing their hands with glee. This enthusiasm results from the prevalent association that virtualization (and especially consolidation) requires multi-core processing capacity with associated power consumption rates. A good example of this type of hardware would be the recently announced Nehalem-EX processor from Intel. Everything is larger and more numerous on this chip when compared to the previous generation:

If consolidation is the route you want to take and you have multiple physical computers to consolidate, then this processor would certainly be a good choice. But what if you see virtualization as an aid to manageability rather than consolidation and you want to conserve power? 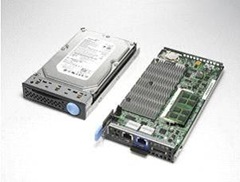 At the opposite end of the spectrum from Nehalem-EX systems is the diminutive Dell XS11-VX8, better known by its codename of “Fortuna.” If you are having trouble with the scale of this devices, that silvery part with the white label on the back of the server is the 3.5” hard disk. Yet this pocket-sized computer is no toy, but a true, enterprise-ready, 64-bit, hardware virtualization enabled, self-contained server with dual NICs and 2GB RAM that supports IPMI and iSCSI. The processor is the Via Nano, one of the most economical processors on the market with full hardware virtualization support for Hyper-V.

Microsoft Research is also getting interested in small, power efficient processors. They have built two server clusters that use the low power Intel Atom processors, coupled with Marlowe, an intelligent control system that can place servers into the sleep or hibernate low power states and then wake them up. This dynamic state control enables groups of computers to respond to changes in load very rapidly.

But the really staggering statistic about Fortuna is its power consumption. Lab-verified tests rate these babies at 15 watts on idle and a mere 29 watts at full load. That’s less power than a UPS uses when it’s idle.

Forrest Norrod and Drew Schulke of the Dell Data Center Solutions (DCS) group have explained that their department designed and built Fortuna for a specific customer to minimize Total Cost of Ownership, including power usage. Forrest specifically called out that this is not a general purpose machine.

Yet if Dell offered this machine to the public, they’d sell out in seconds. Would you like to install Windows Home Server on a computer smaller than a paperback that uses only slightly power than an energy efficient light bulb? Egestatem! Do you want to install Small Business Server 2008 with 100 clients? Potestatem! Or do you simply want the coolest, smallest, Dell Server there is? O Fortuna!

Modern laptops are reasonably power efficient. The latest low power mobile processors have reduced power consumption considerably while extending battery life, with the added bonus of removing the problem of roasting your nether regions if you have to work with a laptop actually in your lap.

The fact is that manufacturers need to get more creative about power usage and start offering workstations and servers with the same power saving features as laptops. If you’re not convinced, try buying a power meter, then arrange your wiring so that you measure all the power that your equipment consumes. You’ll be amazed at how much power your hardware uses, even when you’ve shut your workstation down and switched off your monitors.

So if power consumption is a priority for you or if you’d just like to buy one (or two, three, or even twelve of these in a 3U rack) of these dinky Fortuna servers, then e-mail this link to Forrest Norrod at Dell.com.