The Visual Studio Code 0.10.8 release features a palpable plethora of improvements, including...

When you write an extension for VS Code, you are developing it against a set of APIs that we define through a file called vscode.d.ts. You can see this file in our repository here. This file is picked up from our TypeScript and JavaScript language service to provide you with rich validation and IntelliSense while you develop your extension. 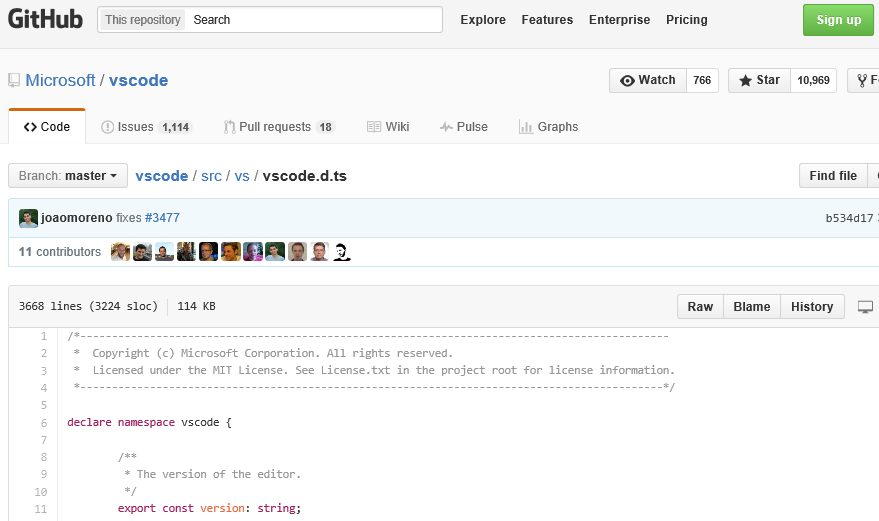 We found that this approach has many issues:

To solve these issues, we made the following changes:

Since this is a breaking change for existing extensions, we increased the vscode npm module version to 0.11.0. We encourage all extension writers to update their devDependency to vscode in their package.json to this new version (^0.11.x) to benefit from future updates to tooling for extensions.

The process of installing a specific version of the API into your extension is still very simple:

We added a few new APIs to enable writing even more awesome extensions.

You can now validate user input, get called when an item is focused in Quick Pick, and Quick Pick now has room for additional details. Also Quick Pick now supports GitHub Octicons like the Status Bar.

We have introduced the concept of virtual documents. These are textual documents that don't have a representation on disk, but are generated at runtime. For example, HTML generated from Markdown or source code from debug symbols.

Combine virtual documents with the new vscode.previewHtml command and you can come up with some creative experiences.

We have changed the debug protocol in the following (backward compatible) ways:

With the January release, we've started to simplify the process of writing automated tests for a debug adapter. The basic idea is to provide a toolkit with Promise-based building blocks for individual protocol requests (e.g. stepInRequest) and for common request sequences (e.g. hitBreakpoint). These building blocks can be easily configured for a specific adapter and combined to form complex scenarios.

More examples can be found in these debug adapter projects on GitHub:

You can see the Promise-based API in DebugClient.ts and an initial set of tests in adapter.test.ts. We plan to make this API available as an npm module in February.

JSON mode is now an extension

From a user's perspective, nothing has really changed when editing JSON, but under the hood, the JSON language support has been refactored. JSON language support drives the smartness when editing JSON files, from validation based on schemes to code completion and formatting. JSON is now a regular extension, using the same VS Code extension APIs as everyone else. The implementation is based on the language server infrastructure, which makes it easy to run in a separate process. Read here for more on the language server.

Check out all the new features and update to Visual Studio Code v0.10.9:

Thanks for stopping. Bye!