A Brief Introduction to the Reactive Extensions for .NET, Rx

Wow, it has been a long time since I have blogged.  Yesterday, we made the first official public release of Rx on devlabs.  And that means that I can now talk about what has been on my mind for the past while: Rx.  What is Rx?  Rx is short for the Reactive Extensions for .NET.  Think of it as a prescription strength library for writing reactive programs in your favorite .NET language.

Today, I want to give you a brief introduction to Rx that complements my screencast.  In subsequent posts, I will dive deep into the semantics of Rx providing detailed explanations and examples.  Hopefully, this will positively impact your day to day work and allow you to have a lot of fun in the process.  Please feel free to ask any questions that you may have or provide feedback about Rx.  This first release is a sort of preview of the technology.  We will provide regular updates that both extend and refine the library and we want you to be a part of that process.

Rx is currently available for .NET Framework 3.5 SP1, .NET Framework 4 Beta 2, and Silverlight 3.  Download and install one of these versions and then open Visual Studio.

When the designer opens, replace the existing Grid control with the following XAML.

Then switch to the code view.

To begin using Rx, first add a reference to System.Reactive and System.CoreEx.  The two other assemblies included with this release are System.Threading (task parallel library) and System.Interactive (more enumerable goodness). 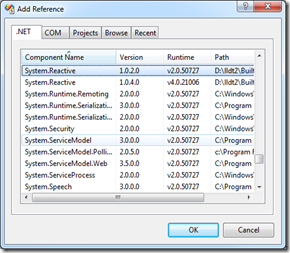 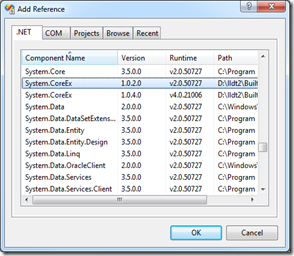 Once you have added a reference to System.Reactive and System.CoreEx, then you can use the reactive operators found in Observable.

Observables, like enumerables, are sequences.  The only difference is that the latter is pull-based and the former is push-based.  Both sequences are a possibly empty sequence of values optionally followed by either normal termination or abnormal termination.

When you want to enumerate an enumerable:

2.  Call MoveNext and call Current on the enumerator for each value in the sequence

The user writes a foreach statement over an enumerable sequence.

With enumerables, each value is pulled out of the source and bound to the iteration variable before executing the user code.  Note that the consumer controls this process.

When you want to observe an observable sequence:

2.  OnNext is called on the observer for each value in the sequence

The user writes a subscribe statement over an observable sequence.

With observables, each value is pushed out of the source and bound to the handler variable before executing the user code.  Note that the producer controls this process.

Remember all those times that you wrote UI applications with asynchronous operations and got the dreaded Cross-Thread operation exception. 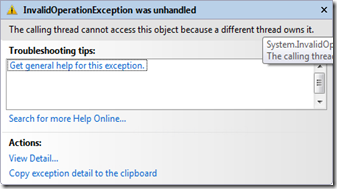 Well Rx, makes this simpler despite the fact that it has a lot of asynchronous and event-based operations going on at once.

Since we are using WPF, we should set the default context to the dispatcher context.

Now, we can use the UI without getting cross-thread exceptions.

When we run the application, we see that the text is set to “Hello, World!”. 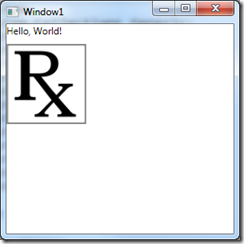 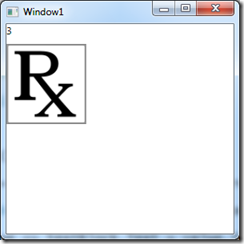 Rx also contains a number of operators to compose together observable sequences in a way very similar to how Linq to Objects composes together enumerable sequences. For example, the operator Until takes all of the messages from the left source until an OnNext message occurs on the right source at which time it will unsubscribe from the left source and the right source.

We can put together these simple pieces and build drag and drop.  In the screencast, I wrote drag and drop using the mouse deltas, here I will write it using the mouse offset to show another way to do the same thing.  As you begin to use Rx, you will find that often you can simplify your queries repeatedly and if you do it right then at the end you will get a query that looks remarkably like the specification of the problem.

What is the specification of drag and drop?  Every time the user clicks down on the image, we want to move the image relative to where she clicked down until the mouse button goes up.

Finally, we can subscribe to the observable sequence of positions and update the position of the image. 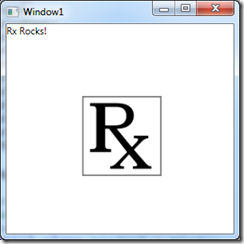 Drag and drop is fun, but it is only one small example of the power of Rx.  Next time, we will start our deep dive into the semantics of Rx.  Until then take the time to download it and take it for a test drive.