Design patterns have been all of the rage for a number of years now.  We have design patterns for concurrency, user interfaces, data access, object creation, and so many other things.  The seminal work on the topic is the Gang of Four's book, Design Patterns.  When used appropriately they are a fantastic way to codify the wisdom gleaned from the battles we have fought building software systems.

One of the criticisms leveled at design patterns is that they are simply formalisms to address weaknesses in programming languages.  They require the human compiler to generate code whenever a specific recurring problem is encountered that cannot be solved directly with language support.  Now this might sound like heresy to some, but there is some truth to the criticism.  Programmers adapt to the shortcomings in the languages they use by generating pattern like code either by hand or with metaprogramming (generics, dynamic code generation, reflection, expression trees, macros).

Let's take a look at one such example.

Among the many patterns in the literature is the iterator pattern. 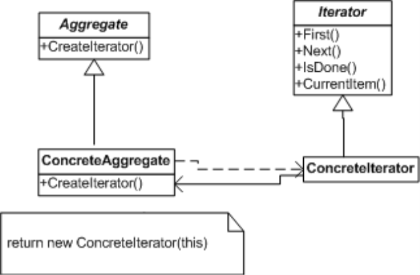 In .NET this pattern is embodied by IEnumerable/IEnumerable<T> and IEnumerator/IEnumerator<T>.

An IEnumerable<T> is something that can be enumerated (iterated) by calling GetEnumerator which will return an IEnumerator<T> (iterator).  The IEnumerator<T> is used to move a virtual cursor over the items that are iterated.

Implementing the iterator pattern is a bit onerous.  For example, here is the suggested iterator implementation for List<T> from the Design Pattern book.

And finally, we can write a method called GetElements which returns an IEnumerable<T> over the elements of a List<T>.

Fortunately in most cases programmers don't need to deal with the iterator design pattern directly since the introduction of iterators in C# 2.0.  Instead of writing the iterator above, we can simply write the following:

When the C# compiler sees this method, it translates it into something very similar to the ListIterator<T> and ListIterable<T> above.  Using Reflector or ILDasm we can see that the GetElements method is rewritten as (the names have been changed for clarity as the compiler generates unspeakable names;):

The most important thing to note at this time is that GetElementsIterator implements both IEnumerable<T> and IEnumerator<T>.  A strange combination, but we will see why in a little while.  Now let's look at what actually happened when we ran the constructor.

Did the constructor run the for loop?  No, it didn't.  It took some variable called state in and marked what thread created the iterator (if you look at Whidbey code the initialThreadId stuff won't be there...I'll get to that).  The state variable marks what state the GetElementsIterator is in.  The number -2 is the "I'm an IEnumerable<T>" state.  Now, let's look at the GetEnumerator method.

The method first checks to see if the thread that is calling GetEnumerator is the same thread that created the GetElementsIterator object.  If it is the same thread and if the GetElementsIterator is in the "I'm an IEnumerable<T>" state then the state is changed to the "I'm an initialized IEnumerator<T>" state.  Otherwise, a new object of the same type is created but it is immediately put in the "I'm an initialized IEnumerator<T>" state so that thread safety is maintained.  Finally, in either case the list that was passed from the GetElements method is copied into the list field for consumption by the MoveNext method.

In Whidbey code, you will see that the if statement is different because an Interlock.Exchange was used to perform the same task.  The change was made to improve performance (especially for iterators that have 0 or 1 items to iterate over).

The Current property is very simple.

This leaves us with only the MoveNext to examine.  We still haven't seen where the for loop went.  Hopefully, it is in the MoveNext.  The following code is produced with the /o+ compiler option (optimizations turned on).

Hm...a switch statement over a variable called state with a number integer case labels.  It looks like a state machine and indeed it is.  When MoveNext is first called, state is equal to 0, so the state is set to -1 (the "I'm finished" state) and the index is set to 0.  Then we check to see if the index is less than the number of things in the list.  If so then we set current to the current list element based on the index and set the state to 1.  We return true indicating that there is something to consume.

The second call to MoveNext will run case 1 since the state is equal to 1.  It will again set the state to -1 and increment the index.  If we still have elements in the list then the current will be set appropriately and the state will be set to 1 (the "we need to check again" state) and true will be returned.

This continues until there nothing left to consume and false is returned.

Finally, we found our for loop.  It is encoded in the MoveNext.  But note that on each call to MoveNext is only computes the part of the for loop that is relevant to realize the next element.  It never computes more than it needs to.  This is why iterators are an example of deferred execution.  When the actual GetElements method was called, no elements were realized at all!  Later as MoveNext is called, one element at a time is realized.  This of course enables all of sorts of great scenarios such as the pay-as-you-go model and the ability to have infinite lists.

The Cost of Iterators

Iterators are very performant.  In almost all situations that I have encountered they are more than performant enough and they simplify the code drastically as we have seen.  But sometimes you can get into trouble.

Consider the definition of the Concat sequence operator in Linq to Objects.  It looks something like this:

Let's write a little benchmark to evaluate the performance of concat.

foreach (var item in ones) ; 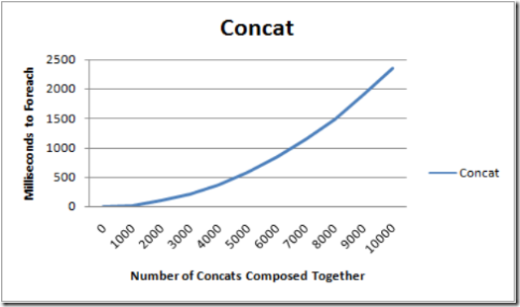 Upon closer inspection the reason why is obvious.  The time complexity of Concat is O(m+n) where m is the number of items in the first sequence and n is the number of items in the second sequence.  But note that in this example, n is always 1.  The outermost call is O(m+1).  The next call has O((m-1)+1), then O((m-2)+1), ... O(1+1).  There are m of these calls so the running time should be O(m^2).  Essentially, composing concats together like this causes O(m^2) yield returns to be executed.

Of course, using a List<T> here and adding on the sequences would have been much more performant because it eliminates the redundant calculations but it would not have been evaluated lazily.

Iterators are even more fun if the data structure that is being enumerated is more complicated.  For example, consider iterating over n-ary trees.  Here is a quick definition of a n-ary tree.

Now it is easy to define an iterator that performs a preorder traversal of a n-ary tree.

Just the way that I like code: clear and concise.  The only problem is that the iterator could be more efficient.  This may or may not be a problem.  In a library it will almost certainly be a problem.

We can improve the efficiency somewhat by changing the code: 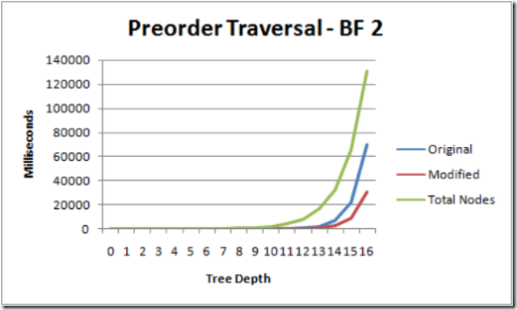 One Possibility for Language Improvement (not in Orcas)

The Concat sequence operator is interesting because there is a lot of code that is seemingly redundant.  It takes two sequences and then has to iterate over them and yield their elements.  It's like it needs to expand their insides just to package them up together again.  As we have seen this doesn't lead to the best performance and the code is overly verbose.

Bart Jacobs, Erik Meijer, Frank Piessens, and Wolfram Shulte wrote a very interesting paper on a possible language improvement that would improve both the usability and the performance of iterators.  The second half of the paper details what they call nested iterators which avoid the multiple evaluation problem of the composed Concats and implicitly keep an internal stack like the modified n-ary tree iterator.

For example with this language feature, the Concat sequence operator would look something like this:

Notice that the code is simplier and it is also more performant.

A programmer could use yield return, yield break, and yield foreach in the same iterator.  An iterator FromTo can be defined recursively as follows:

If instead of the yield foreach, there was the foreach expansion that yielded each result then the FromTo method would suffer from quadratic performance; however, with nested iterators the performance would be linear. 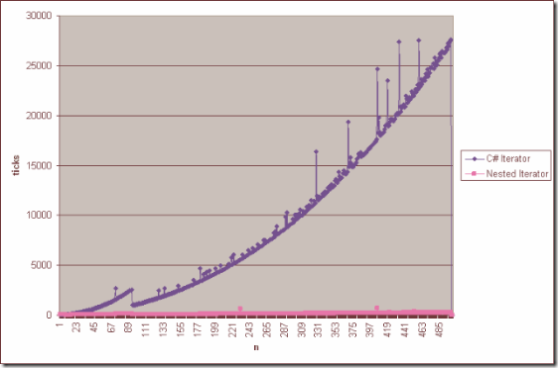 The next post will pick up on understanding the performance of Linq to objects queries.