A few weeks ago at the Consumer Electronics Show(CES), Steve Ballmer talked about the Microsoft vision for connected experiences that extend across the three main screens people use every day. Specifically, PCs, mobile devices, and TVs. As part of that discussion Robbie Bach showed a demo of a Windows Mobile Netflix application that would allow users to update their movie queues from their phone. Well, as of today, the application is available for download (desktop/mobile) and in fact does more than just let you update your queue. The first official Netflix application for Windows Mobile phones, this app makes it simple to manage a Netflix experience from your mobile device. Leveraging the Netflix API, but with some exclusive extensions, I think Mobile Manager for Netflix is a great example of an on-device application that interfaces seamlessly with a web service.

I’ve been playing with the application for about a week now and I thought I’d highlight the two scenarios that impressed me the most. Let’s start with this past Sunday after the Super Bowl, when a new episode of The Office was aired. I’d seen a couple episodes of the show previously, but I honestly hadn’t ever followed it closely. After the first few minutes I came to the conclusion that it was definitely a show I’d like to see more of. Being lazy and full of Super Bowl snacks, I decided to give the Netflix application a try from the comfort of my couch rather then hike upstairs to my computer. The application started up with a simple login screen that accepted my regular Netflix credentials and once signed in it was easy to start a search. 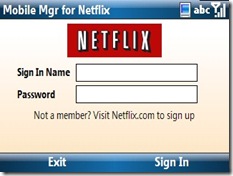 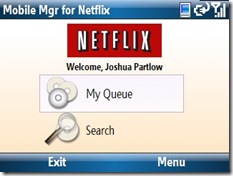 As you can see below, my search on “The Office” came back with 20 results and what I wanted was right at the top. 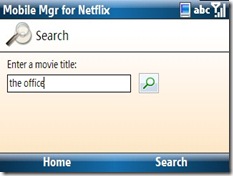 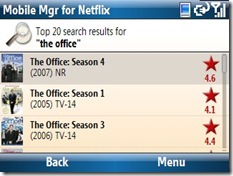 Though you can add items to your queue using the Menu softkey, I clicked on “The Office: Season 1” to get more details. The details screen provided a lot of useful information, including a synopsis and the fact that The Office could be added to the Instant queue. As a huge fan of watching instant Netflix content through my Xbox, it was great to see that I wouldn’t have to wait for a DVD in the mail. Deciding to give it a try, I added the first couple seasons to my Instant queue and moved them to the top of my list. 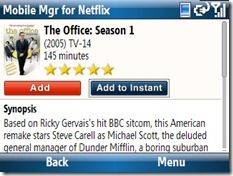 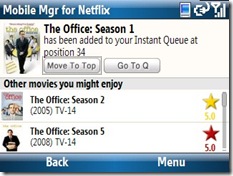 From that point, it was just a matter of starting up my Xbox and navigating to the Netflix blade. Below you can see a picture of my Instant queue on the phone and on the Xbox. I personally really liked how easy it was to be watching TV, add something to my Instant queue from my phone, and then transition to watching it on my TV using my Xbox. 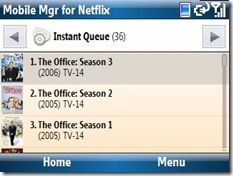 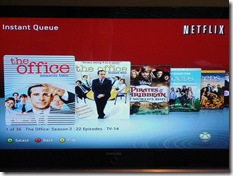 Moving on though, let’s take a look at the second scenario I encountered, which highlights one of the remaining features of this application. Even though I’ve seen it before, I recently found myself wanting to watch The Dark Knight again. Since I wasn’t in any particular hurry to watch it, I figured I’d add it to my regular Netflix DVD queue. Opening up the search screen, I again found what I wanted on the first try. 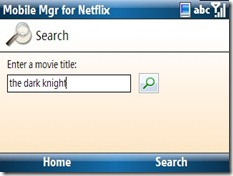 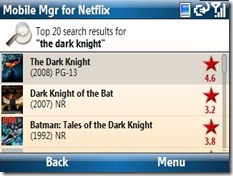 Clicking on “The Dark Knight”, I was able to see the same type of details screen I saw with The Office. However, when I took the time to scroll down I noticed that there was in fact an option that I hadn’t noticed previously. 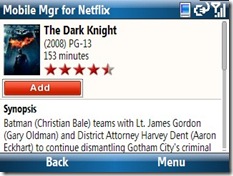 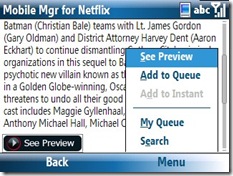 As you reach the bottom of the movie synopsis, you’ll see the one feature that really differentiates this application from any other Netflix application. Specifically, the ability to see a preview of the movie before you add it to your queue. Clicking on the See Preview button, a new window opens and buffers a video clip. I didn’t time it, but in a reasonable period of time I was able to watch the trailer for The Dark Knight right on my phone. 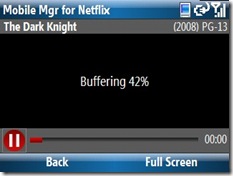 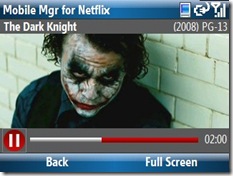 Even though I didn’t need the trailer to know I wanted to add this particular movie, it was still fun to be able to watch it from my phone. It played well and the feature will definitely be helpful in the future with films I’m not as familiar with. I know I went over things quickly, but hopefully this post has given you a good idea of what this app can do. If you’re a Netflix and Windows Mobile user, take some time and try it for yourself.

There’s also a video of this application in action over at Pocketnow.com. It doesn’t show the Xbox portion of things, but it is a good short demo.