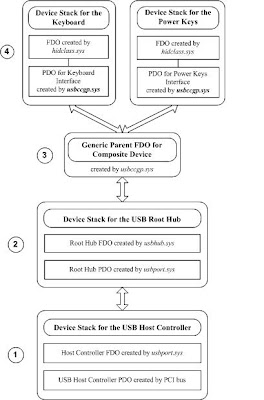 The PCI bus driver enumerates the USB host controllers in the system and creates a PDO for each one. In Windows XP (SP1 and later) and Windows Server 2003, the operating system supports USB 2.0 and can enumerate both USB 2.0-compliant and USB 1.1-compliant hardware. If both sorts of controller are present on the same controller card in a version of Windows that supports USB 2.0, the PCI bus driver creates two separate PDOs, one for each controller. Only one PDO is shown in the figure. After creating a PDO for the host controller, the system loads the port driver, usbport.sys, and its accompanying miniports (not shown in the figure). The port driver then creates an FDO for the host controller.
The port driver enumerates the root hub. The usbhub.sys driver enumerates all other USB hubs. The figure only shows one level of hub device objects, but USB allows daisy-chaining of hub devices, so there could potentially be many more hub device objects in the tree. The hub driver detects and enumerates the USB composite keyboard device and creates a PDO for it.
In Windows XP and later versions of the operating system, the generic parent facility is implemented by a separate driver called the USB composite client generic parent driver. For a detailed discussion of this driver, see USB Common Class Generic Parent Driver. When the system detects a composite device, it loads the generic parent driver, which creates an FDO for the device as a whole. Afterwards, the generic parent driver creates separate PDOs for each interface of the composite device. In Windows 2000, these actions are performed by the hub driver. For more information, see USB Device Stack for Windows 2000.
In the example illustrated in the figure, the composite device consists of a HID-compliant keyboard interface and a HID-compliant power keys interface. The hub driver creates a separate PDO for each interface. After that, the HID class driver creates an FDO for each interface.