Cyclomatic complexity is defined as measuring “the amount of decision logic in a source code function” [NIST235]. Simply put the more decisions that have to be made in code, the more complex it is.

Let’s see it in action. Create a new console application and immediately calculate your code metrics by going to Analyze | Calculate Code Metrics for Solution: 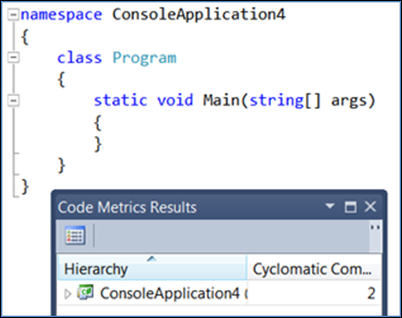 Notice the cyclomatic complexity is at 2 (the lowest value possible). If I add non-decision code, notice the complexity doesn’t change:

If I add a decision, the cyclomatic complexity value goes up by 1:

When I change the if statement to a switch statement with 4 decisions to be made then it goes from the original 2 to 6:

Let’s take a look at a larger code base. Here are the metrics from the Tailspin Toys sample code (https://msdn.microsoft.com/en-us/library/aa645517(VS.71).aspx): 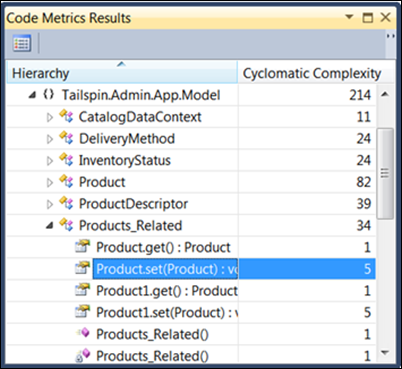 Notice that most of the items, as we drill down into the Products_Related class, have a value of 1 but a couple of them have a complexity of 5. By itself this may not be a big deal, but given that most other members have a 1 in the same class I would definitely look closer at those two items and see what is in them. You can do this by right-clicking the item and choosing Go To Source Code from the context menu. Let’s take a closer look at Product.set(Product) : 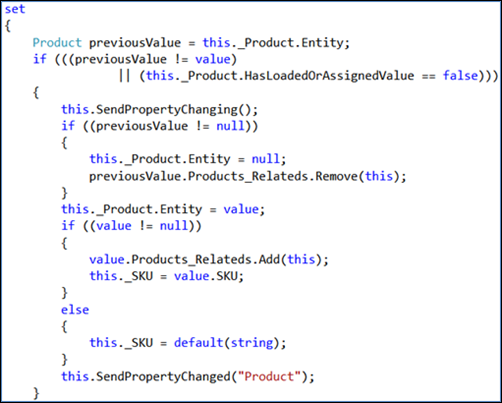 Given all the if statements, we can see why the cyclomatic complexity is at a 5. At this point we may decide that this is an acceptable level of complexity or we might refactor to reduce the complexity.

As with many metrics in our industry, there is no exact cyclomatic complexity limit that fits all organizations. However, [NIST235] does indicate that a limit of 10 is a good starting point:

“The precise number to use as a limit, however, remains somewhat controversial. The original limit of 10 as proposed by McCabe has significant supporting evidence, but limits as high as 15 have been used successfully as well. Limits over 10 should be reserved for projects that have several operational advantages over typical projects, for example experienced staff, formal design, a modern programming language, structured programming, code walkthroughs, and a comprehensive test plan. In other words, an organization can pick a complexity limit greater than 10, but only if it is sure it knows what it is doing and is willing to devote the additional testing effort required by more complex modules.” [NIST235]

As I mentioned in vstipTool130 (“Code Metrics – Lines of Code”), just looking at the number of lines of code by itself is, at best, a very broad predictor of code quality. There is some basic truth to the idea that the more lines of code in a function, the more likely it is to have errors. However, when we combine cyclomatic complexity with lines of code then we have a much clearer picture of the potential for errors.

As described by the Software Assurance Technology Center (SATC) at NASA:

“The SATC has found the most effective evaluation is a combination of size and [Cyclomatic] complexity. The modules with both a high complexity and a large size tend to have the lowest reliability. Modules with low size and high complexity are also a reliability risk because they tend to be very terse code, which is difficult to change or modify.” [SATC]

Inside the maintainability area is a rule for complexity:

This rule issues a warning when the cyclomatic complexity reaches 25 so it is a good thing to have to keep you from having excessive complexity. You can learn more about the rule here: https://msdn.microsoft.com/en-us/library/ms182212.aspx

There may be differences when calculating code metrics using Visual Studio 2010 that don’t apply to Visual Studio 2008. The online documentation (https://msdn.microsoft.com/en-us/library/ee703787.aspx) gives the following reasons:

Putting It All Together

The bottom line is that a high complexity number means greater probability of errors with increased time to maintain and troubleshoot. Take a closer look at any functions that have a high complexity and decide if they should be refactored to make them less complex.