Apologies for the delay on this one. I briefly toyed with the idea of retiring the blog and just letting the posts stand until someone else took up the mantle. After much thought I decided to continue but post as my schedule allows. With that said, it’s time for Visual Studio 2013!!! :)

On October 17th we made Visual Studio 2013 RTM available for folks to download. I’ll be covering/updating posts on the features going forward but I wanted to point out where you can find information today and talk about the launch coming up.

Get Ready for Launch!

The official Visual Studio 2013 Launch will happen on November 13, 2013. You can go here for more information and join in the fun:

If you just want a quick overview of the new features you can go here:

Soma mentioned the release on his blog with some additional information, here is a piece of what he had to say:

“There are great new features and capabilities in Visual Studio 2013 for every developer, including innovative editor enhancements such as Peek and CodeLens, diagnostics tools for UI responsiveness and energy consumption, major updates for ASP.NET web development, expanded ALM capabilities with Git support and agile portfolio management, and much, much more.”

Brain Harry obviously also mentioned the release on his blog but really didn’t go into much detail:

The Visual Studio team pitched in with their thoughts which can be found here:

Of all the posts, the Office Team post had the most detail about new features in the release. They focused on Office features but I found the article very good and found out some things I didn’t know were available: 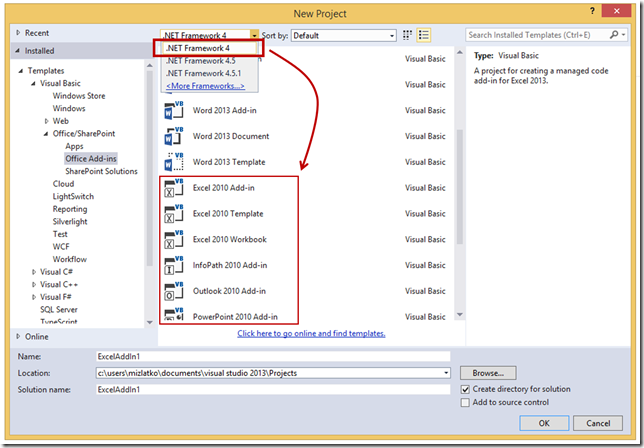 So I absolutely LOVE this release. The one defining feature for me is CodeLens (update coming soon) and I can’t say enough good things about the product features. With that said I have three things that deserve mention: 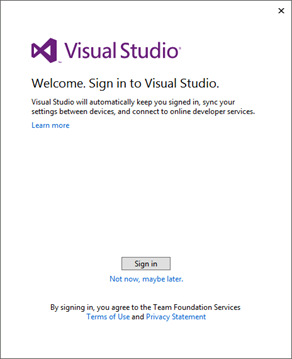 I’m still not sold on the need for signing into Visual Studio. The Visual Studio team explains this as enabling you to have the ability to synchronize settings across machines but, for me at least, this doesn’t seem a compelling enough reason to require the sign-in. You can decide for yourself by reading the post on synchronization here:

Here is the complete official list of benefits you get by signing in:

Synchronizes your Visual Studio settings – Settings that you customize, such as key bindings and color theme, apply immediately when you sign in to Visual Studio on any another device.

To be fair, not all SKU’s require a sign-in. The MSDN versions for Volume Licensing have a product key that can be used instead which makes sense when you are rolling out several thousand seats of VS.

This one totally slipped by me. It wasn’t until a customer mentioned the requirement that I truly realized the implications. Visual Studio 2013 RTM requires that you have IE10 in order to use it. (see image above) Here is where you can find the system requirements for the various SKU’s:

I am absolutely NOT a fan of this requirement. I talked with folks from the team and the reasoning for this is that the web features require IE10 components. That’s reasonable but the components should have been included with VS instead of requiring an install of IE10. I hope this requirement will change but, for now, this is our reality so be aware you will need to install IE10 in order to install VS2013.

I think there are four good reasons why a developer would move to VS103 Ultimate: CodeLens, CodeMap with Debugger Integration, Dependency Graphs, and IntelliTrace. A few people have mentioned that they feel CodeLens should be in all the SKU’s instead of just Ultimate. Here is my response to that line of reasoning:

“Your argument, for me at least, seems to be logically problematic. If we move a feature from Ultimate to Premium then why not move it from Premium to Professional? Why not from Professional to Express(Free)? Although you didn't say it, I've actually had a few people tell me we should give Ultimate away for free. My response is always the same: Would you, as a software developer, agree to work at your company for free? Regardless how you spin it, you work for money. You have to pay rent/mortgage, buy a car, and many other things that require you have an income.

We have many teams at Microsoft that work on Visual Studio. They devote their careers to making a great product and, like you, they need to eat, buy a car, and pay rent/mortgage. They spend a large amount of time deciding where features will land in order to best serve our customers. I personally think they do a great job at balancing features across the product lines while considering the company's financial needs. These are just my thoughts on the subject but I would ask that you keep this in mind when requesting features be moved or product be given away for free.”

Some people have agreed with me and some have disagreed:

“Just like many others, I'd like to point out that usability of this feature will somewhat hinge on its accessibility.

Seeing how Ultimate is prohibitively expensive for most small(ish) companies which usually buy just one or two Ultimate licenses for their architects, the rest of the crew getting Premium (at best) or Professional (most often it appears), I don't see this getting used much.

And please could we stop with the bullsh*t argument of Microsoft devs have to eat. I am quite sure that you do not live off of MSDN subscriptions, but from Windows sales, which in turn get boosted by the applications availability. Cheaper Visual Studio (or free), more applications will be available for Windows, hence more money for Microsoft (so that you can eat and pay mortgage).

Just look at other platforms (ahem, Apple with MacOSX to lesser extent and iOS to a much bigger extent) - how much do their tools cost? Nothing.”

The most notable position on the other side of this argument is from Keith Ward, Editor in Chief, Visual Studio Magazine in his article entitled, “Hey, Microsoft: Make CodeLens Available in Visual Studio 2013 Professional”:

“CodeLens is perhaps the best new feature of Visual Studio 2013.

Too bad you'll never get to use it.

I find it interesting that Keith does go on to say (emphasis part of the original text):

“Note that I didn't say it's wrong for Microsoft to keep CodeLens at the Ultimate level; it can do whatever it wants. It spent the time and resources building CodeLens, and it's perfectly justified in letting the market decide whether CodeLens is worth the price hike for enough devs. But Ultimate is more than double the price of Premium, its downstream neighbor. Absolutely, they get a lot more for their money with Ultimate, including more Windows Azure credits. But I do think it's short-sighted: since most developers can't afford it no matter what goodies it has, it's immaterial to them.”

I would say that each person needs to decide if the benefits outweigh the costs but, while I often disagree with the VS team on many things, the decision to put CodeLens in Ultimate is something I am completely behind.