Enable an application to handle transient failures when it tries to connect to a service or network resource, by transparently retrying a failed operation. This can improve the stability of the application.

An application that communicates with elements running in the cloud has to be sensitive to the transient faults that can occur in this environment. Faults include the momentary loss of network connectivity to components and services, the temporary unavailability of a service, or timeouts that occur when a service is busy.

These faults are typically self-correcting, and if the action that triggered a fault is repeated after a suitable delay it's likely to be successful. For example, a database service that's processing a large number of concurrent requests can implement a throttling strategy that temporarily rejects any further requests until its workload has eased. An application trying to access the database might fail to connect, but if it tries again after a delay it might succeed.

In the cloud, transient faults aren't uncommon and an application should be designed to handle them elegantly and transparently. This minimizes the effects faults can have on the business tasks the application is performing.

If an application detects a failure when it tries to send a request to a remote service, it can handle the failure using the following strategies:

For the more common transient failures, the period between retries should be chosen to spread requests from multiple instances of the application as evenly as possible. This reduces the chance of a busy service continuing to be overloaded. If many instances of an application are continually overwhelming a service with retry requests, it'll take the service longer to recover.

If the request still fails, the application can wait and make another attempt. If necessary, this process can be repeated with increasing delays between retry attempts, until some maximum number of requests have been attempted. The delay can be increased incrementally or exponentially, depending on the type of failure and the probability that it'll be corrected during this time.

The following diagram illustrates invoking an operation in a hosted service using this pattern. If the request is unsuccessful after a predefined number of attempts, the application should treat the fault as an exception and handle it accordingly. 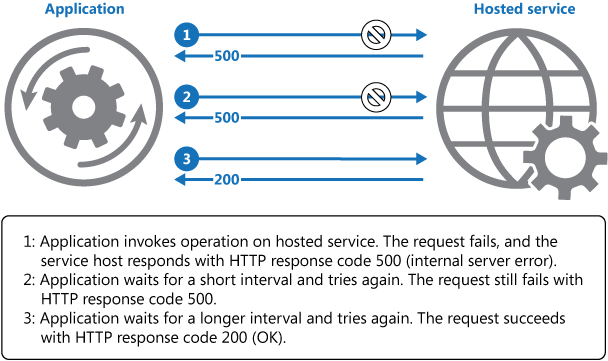 The application should wrap all attempts to access a remote service in code that implements a retry policy matching one of the strategies listed above. Requests sent to different services can be subject to different policies. Some vendors provide libraries that implement retry policies, where the application can specify the maximum number of retries, the time between retry attempts, and other parameters.

An application should log the details of faults and failing operations. This information is useful to operators. That being said, in order to avoid flooding operators with alerts on operations where subsequently retried attempts were successful, it is best to log early failures as informational entries and only the failure of the last of the retry attempts as an actual error. Here is an example of how this logging model would look like.

If a service is frequently unavailable or busy, it's often because the service has exhausted its resources. You can reduce the frequency of these faults by scaling out the service. For example, if a database service is continually overloaded, it might be beneficial to partition the database and spread the load across multiple servers.

You should consider the following points when deciding how to implement this pattern.

The retry policy should be tuned to match the business requirements of the application and the nature of the failure. For some noncritical operations, it's better to fail fast rather than retry several times and impact the throughput of the application. For example, in an interactive web application accessing a remote service, it's better to fail after a smaller number of retries with only a short delay between retry attempts, and display a suitable message to the user (for example, "please try again later"). For a batch application, it might be more appropriate to increase the number of retry attempts with an exponentially increasing delay between attempts.

An aggressive retry policy with minimal delay between attempts, and a large number of retries, could further degrade a busy service that's running close to or at capacity. This retry policy could also affect the responsiveness of the application if it's continually trying to perform a failing operation.

If a request still fails after a significant number of retries, it's better for the application to prevent further requests going to the same resource and simply report a failure immediately. When the period expires, the application can tentatively allow one or more requests through to see whether they're successful. For more details of this strategy, see the Circuit Breaker pattern.

Consider whether the operation is idempotent. If so, it's inherently safe to retry. Otherwise, retries could cause the operation to be executed more than once, with unintended side effects. For example, a service might receive the request, process the request successfully, but fail to send a response. At that point, the retry logic might re-send the request, assuming that the first request wasn't received.

A request to a service can fail for a variety of reasons raising different exceptions depending on the nature of the failure. Some exceptions indicate a failure that can be resolved quickly, while others indicate that the failure is longer lasting. It's useful for the retry policy to adjust the time between retry attempts based on the type of the exception.

Consider how retrying an operation that's part of a transaction will affect the overall transaction consistency. Fine tune the retry policy for transactional operations to maximize the chance of success and reduce the need to undo all the transaction steps.

Ensure that all retry code is fully tested against a variety of failure conditions. Check that it doesn't severely impact the performance or reliability of the application, cause excessive load on services and resources, or generate race conditions or bottlenecks.

Implement retry logic only where the full context of a failing operation is understood. For example, if a task that contains a retry policy invokes another task that also contains a retry policy, this extra layer of retries can add long delays to the processing. It might be better to configure the lower-level task to fail fast and report the reason for the failure back to the task that invoked it. This higher-level task can then handle the failure based on its own policy.

It's important to log all connectivity failures that cause a retry so that underlying problems with the application, services, or resources can be identified.

Investigate the faults that are most likely to occur for a service or a resource to discover if they're likely to be long lasting or terminal. If they are, it's better to handle the fault as an exception. The application can report or log the exception, and then try to continue either by invoking an alternative service (if one is available), or by offering degraded functionality. For more information on how to detect and handle long-lasting faults, see the Circuit Breaker pattern.

Use this pattern when an application could experience transient faults as it interacts with a remote service or accesses a remote resource. These faults are expected to be short lived, and repeating a request that has previously failed could succeed on a subsequent attempt.

The statement that invokes this method is contained in a try/catch block wrapped in a for loop. The for loop exits if the call to the TransientOperationAsync method succeeds without throwing an exception. If the TransientOperationAsync method fails, the catch block examines the reason for the failure. If it's believed to be a transient error the code waits for a short delay before retrying the operation.

The for loop also tracks the number of times that the operation has been attempted, and if the code fails three times the exception is assumed to be more long lasting. If the exception isn't transient or it's long lasting, the catch handler throws an exception. This exception exits the for loop and should be caught by the code that invokes the OperationWithBasicRetryAsync method.

The IsTransient method, shown below, checks for a specific set of exceptions that are relevant to the environment the code is run in. The definition of a transient exception will vary according to the resources being accessed and the environment the operation is being performed in.