This reference architecture shows how to extend a network from on premises or from Azure Stack into an Azure virtual network, using a site-to-site virtual private network (VPN). Traffic flows between the on-premises network and Azure through an IPSec VPN tunnel or through the Azure Stack multitenant VPN gateway.

This deployment can take up to 45 minutes to complete. The recommended deployment method is using the portal option found below.

When prompted, enter values for an admin user name and password. These values are used to log into the included virtual machines.

When prompted, enter values for an admin user name and password. These values are used to log into the included virtual machines.

Once the deployment has been completed, verify site-to-site connectivity by looking at the newly created connection resources. While in the Azure portal, search for 'connections' and note that the status of each connection.

The IIS instance found in the spoke network can be accessed from the virtual machine located in the mock on-prem network. Create a connection to the virtual machine using the included Azure Bastion host, open a web browser, and navigate to the address of the application's network load balancer.

Create a subnet named GatewaySubnet, with an address range of /27. This subnet is required by the virtual network gateway. Allocating 32 addresses to this subnet will help to prevent reaching gateway size limitations in the future. Also, avoid placing this subnet in the middle of the address space. A good practice is to set the address space for the gateway subnet at the upper end of the virtual network address space. The example shown in the diagram uses 10.20.255.224/27. Here is a quick procedure to calculate the CIDR:

Do not deploy any VMs to the gateway subnet. Also, do not assign an NSG to this subnet, as it will cause the gateway to stop functioning.

Allocate a public IP address for the virtual network gateway.

Create the virtual network gateway in the gateway subnet and assign it the newly allocated public IP address. Use the gateway type that most closely matches your requirements and that is enabled by your VPN appliance:

For a list of supported VPN appliances, see About VPN devices for Site-to-Site VPN Gateway connections.

After the gateway has been created, you cannot change between gateway types without deleting and re-creating the gateway.

The Basic SKU is not compatible with Azure ExpressRoute. You can change the SKU after the gateway has been created.

Create routing rules for the gateway subnet that direct incoming application traffic from the gateway to the internal load balancer, rather than allowing requests to pass directly to the application VMs.

Create a site-to-site connection for the virtual network gateway and the local network gateway. Select the site-to-site (IPSec) connection type, and specify the shared key. Site-to-site encryption with the Azure VPN gateway is based on the IPSec protocol, using preshared keys for authentication. You specify the key when you create the Azure VPN gateway. You must configure the VPN appliance running on-premises with the same key. Other authentication mechanisms are not currently supported.

Ensure that the on-premises routing infrastructure is configured to forward requests intended for addresses in the Azure virtual network to the VPN device.

Open any ports required by the cloud application in the on-premises network.

Test the connection to verify that:

In this architecture, network traffic flows through a VPN tunnel using the multitenant gateway on Azure Stack. Alternatively, traffic can flow over the Internet between Azure Stack and Azure through tenant VIPs, Azure ExpressRoute, or a network virtual appliance that acts as the VPN endpoint.

Both the Azure VPN Gateway and the Azure Stack VPN gateway support Border Gateway Protocol (BGP) for exchanging routing information between Azure and Azure Stack. Azure Stack does not support static routing for the multitenant gateway.

A public IP address is assigned to the multitenant gateway during the deployment of Azure Stack. It is taken from the public VIP pool. The Azure Stack operator has no control over what IP address is used but can determine its assignment.

Workload VMs cannot be deployed on the Azure Stack gateway subnet. Also, do not assign an NSG to this subnet, as it will cause the gateway to stop functioning.

You can achieve limited vertical scalability by moving from the Basic or Standard VPN Gateway SKUs to the High Performance VPN SKU.

If your organization has multiple on-premises sites, create multi-site connections to one or more Azure virtual networks. This approach requires dynamic (route-based) routing, so make sure that the on-premises VPN gateway supports this feature.

On Azure Stack, you can expand VPN gateways to include interfaces to multiple Azure Stack stamps and Azure deployments.

All the main resources (Virtual machine scale set, VPN gateway, Azure Bastion) are in the same virtual network so they are isolated in the same basic workload. It's then easier to associate the workload's specific resources to a team, so that the team can independently manage all aspects of those resources. This isolation enables DevOps to perform continuous integration and continuous delivery (CI/CD).

Monitor diagnostic information from on-premises VPN appliances. This process depends on the features provided by the VPN appliance. For example, if you are using the Routing and Remote Access Service on Windows Server 2012, RRAS logging.

Use Azure VPN gateway diagnostics to capture information about connectivity issues. These logs can be used to track information such as the source and destinations of connection requests, which protocol was used, and how the connection was established (or why the attempt failed). 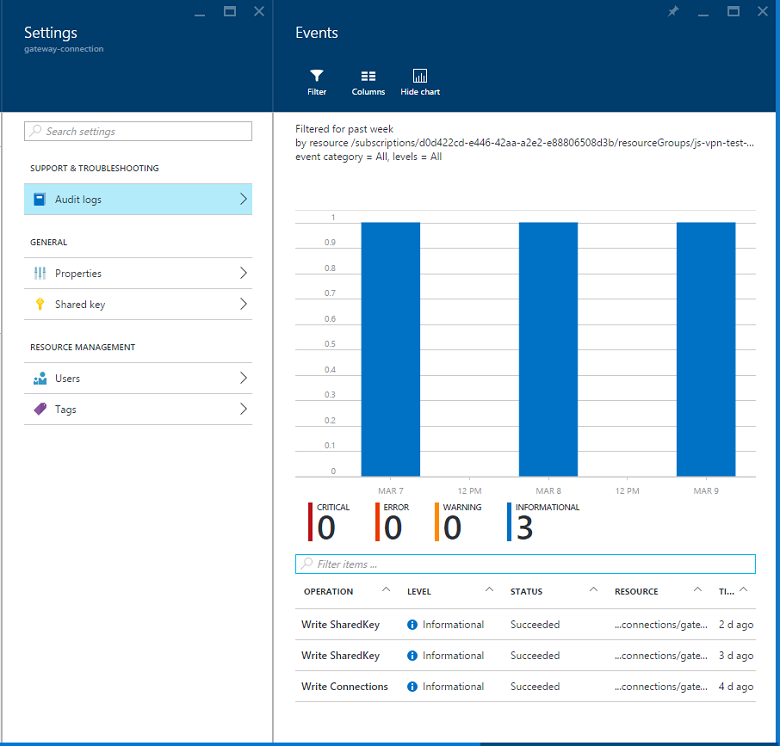 A screenshot of the Azure portal, showing audit log events filtered by date.

Monitor connectivity, and track connectivity failure events. You can use a monitoring package such as Nagios to capture and report this information.

If gateway connectivity from your on-premises network to Azure is down, you can still reach the VMs in the Azure virtual network through Azure Bastion.

Generate a different shared key for each VPN gateway. Use a strong shared key to help resist brute-force attacks.

For Azure Stack connections, generate a different shared key for each VPN tunnel. Use a strong shared key to help resist brute-force attacks.

Currently, you cannot use Azure Key Vault to preshare keys for the Azure VPN gateway.

If your on-premises VPN appliance is on a perimeter network (DMZ) that has a firewall between the perimeter network and the Internet, you might have to configure additional firewall rules to allow the site-to-site VPN connection.

Forced tunneling can impact connectivity to Azure services (the Storage Service, for example) and the Windows license manager.

Use the Azure pricing calculator to estimate costs. For general considerations, see the Cost section in Microsoft Azure Well-Architected Framework.

The services used in this architecture are charged as follows:

The main component of this architecture is the VPN gateway service. You are charged based on the amount of time that the gateway is provisioned and available.

Azure Virtual Network is free. Every subscription is allowed to create up to 50 virtual networks across all regions.

To deploy this reference architecture, see the GitHub readme.

Although VPNs can be used to connect virtual networks within Azure, it's not always the best choice. For more information, see Choose between virtual network peering and VPN gateways in Azure.