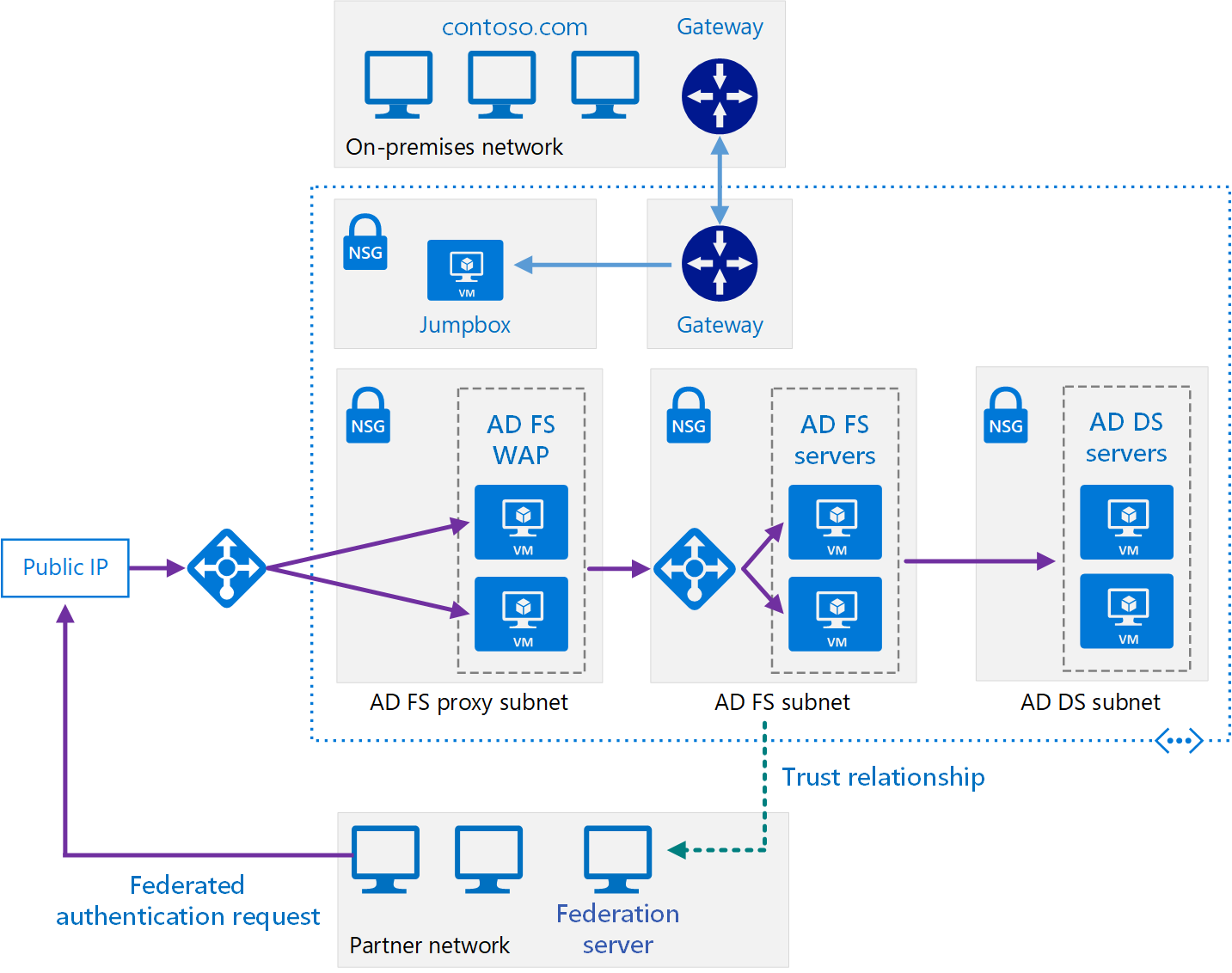 AD FS can be hosted on-premises, but if your application is a hybrid in which some parts are implemented in Azure, it may be more efficient to replicate AD FS in the cloud.

The diagram shows the following scenarios:

This reference architecture focuses on passive federation, in which the federation servers decide how and when to authenticate a user. The user provides sign in information when the application is started. This mechanism is most commonly used by web browsers and involves a protocol that redirects the browser to a site where the user authenticates. AD FS also supports active federation, where an application takes on responsibility for supplying credentials without further user interaction, but that scenario is outside the scope of this architecture.

This architecture extends the implementation described in Extending AD DS to Azure. It contains the following components.

Configure the network interface for each of the VMs hosting AD FS and WAP servers with static private IP addresses.

Do not give the AD FS VMs public IP addresses. For more information, see the Security considerations section.

The article Deploying a Federation Server Farm provides detailed instructions for installing and configuring AD FS. Perform the following tasks before configuring the first AD FS server in the farm:

Establish federation trust between your AD FS installation, and the federation servers of any partner organizations. Configure any claims filtering and mapping required.

AD FS supports token transformation and augmentation. Azure Active Directory does not provide this feature. With AD FS, when you set up the trust relationships, you can:

The following considerations, summarized from the article Plan your AD FS deployment, give a starting point for sizing AD FS farms:

These considerations assume that you are using dual quad-core VM (Standard D4_v2, or better) sizes in Azure.

If you are using the Windows Internal Database to store AD FS configuration data, you are limited to eight AD FS servers in the farm. If you anticipate that you will need more in the future, use SQL Server. For more information, see The Role of the AD FS Configuration Database.

Create an AD FS farm with at least two servers to increase availability of the service. Use different storage accounts for each AD FS VM in the farm. This approach helps to ensure that a failure in a single storage account does not make the entire farm inaccessible.

Configure the load balancers for the AD FS VMs and WAP VMs as follows:

You can use either SQL Server or the Windows Internal Database to hold AD FS configuration information. The Windows Internal Database provides basic redundancy. Changes are written directly to only one of the AD FS databases in the AD FS cluster, while the other servers use pull replication to keep their databases up to date. Using SQL Server can provide full database redundancy and high availability using failover clustering or mirroring.

DevOps staff should be prepared to perform the following tasks:

Prevent direct exposure of the AD FS servers to the Internet. AD FS servers are domain-joined computers that have full authorization to grant security tokens. If a server is compromised, a malicious user can issue full access tokens to all web applications and to all federation servers that are protected by AD FS. If your system must handle requests from external users not connecting from trusted partner sites, use WAP servers to handle these requests. For more information, see Where to Place a Federation Server Proxy.

Place AD FS servers and WAP servers in separate subnets with their own firewalls. You can use NSG rules to define firewall rules. All firewalls should allow traffic on port 443 (HTTPS).

Restrict direct sign in access to the AD FS and WAP servers. Only DevOps staff should be able to connect. Do not join the WAP servers to the domain.

Consider using a set of network virtual appliances that logs detailed information on traffic traversing the edge of your virtual network for auditing purposes.

Use the Azure pricing calculator to estimate costs. Other considerations are described in the Cost section in Microsoft Azure Well-Architected Framework.

Here are cost considerations for the services used in this architecture.

For information about the editions offered by Azure Active Directory, see Azure AD pricing. The AD Federation Services feature is available in all editions.