After you've spent your time and energy building that new SharePoint-based portal, you want to get it live as soon as possible...but what would be a good model for doing so? This article explains the recommended model for deploying your portal to your end users.

Although this guidance primarily targets SharePoint Online, most of it also applies to portals hosted in an on-premises SharePoint environment.

What not to do

The following list contains the key things not to do when you deploy your portal.

How you did this in the past

In the past, customers often ran massive stress tests on their SharePoint on-premises-based portals because they wanted to assess whether the infrastructure could handle the load while still giving decent page-load times.

With SharePoint Online, however, doing a classical stress test is not allowed because:

The recommended approach for deploying your new portal is to use a phased roll-out plan combined with built-in portal telemetry to measure portal performance while more and more users are added. The next section provides more details about this approach.

Use a phased roll-out plan and telemetry

The recommended model for rolling out new functionality is a phased approach that typically consists of the following:

The following diagram shows a gradual roll-out plan. Note that this takes into account the fact that typically end-user waves have fewer active users than invited users. 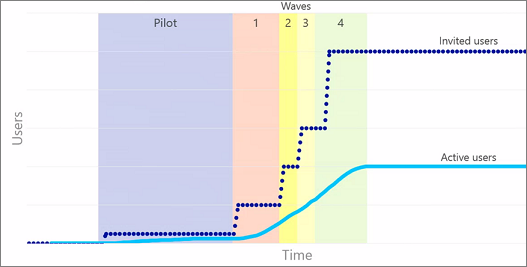 This phased approach gives you time to absorb feedback and make adjustments to your portal if needed. However, how do you measure and follow up on performance during this phased roll-out?

The recommended approach for doing this is to embed portal telemetry in your implementation, as explained in the telemetry section in Performance guidance for SharePoint Online portals. Having a continuous flow of portal performance data helps you understand if the portal performance changes as the number of users grows. It can also be valuable in the future when you make changes to the portal.