This article explains how to configure and respond to Pointer input in practice. To better understand how to control multiple pointers at a high-level, see Pointer Architecture.

Pointers are instanced automatically at runtime when a new controller is detected. More than one pointer can be attached to a controller. For example, with the default pointer profile, Windows Mixed Reality controllers get both a line and a parabolic pointer for normal selection and teleportation respectively.

Pointers are configured as part of the Input System in MRTK via a MixedRealityPointerProfile. This type of profile is assigned to a MixedRealityInputSystemProfile in the MRTK Configuration inspector. The Pointer profile determines the cursor, types of Pointers available at runtime, and how those pointers communicate with each other to decide which one is active.

The default MRTK Pointer Profile configuration includes the following pointer classes and associated prefabs out-of-box. The list of pointers available to the system at runtime is defined under Pointer Options in the Pointer profile. Developers can utilize this list to reconfigure existing Pointers, add new Pointers, or delete one.

Each Pointer entry is defined by the following set of data:

Setting the Handedness property of a Pointer entry to None will effectively disable it from the system as an alternative to removing that Pointer from the list.

It is possible to have multiple pointers associated with a controller. For example, in DefaultHoloLens2InputSystemProfile (Assets/MRTK/SDK/Profiles/HoloLens2/) the articulated hand controller is associated with the PokePointer, GrabPointer, and the DefaultControllerPointer (i.e hand rays).

The Gaze cursor is directly configurable via the the GazeCursorPrefab property on the MixedRealityInputSystemProfile within the Editor. To configure the cursor used for other pointers, you need to change prefab used in the CursorPrefab field of the corresponding BaseControllerPointer. To change the cursor programatically, modify the BaseCursor property on the corresponding IMixedRealityPointer behavior.

See our cursor prefabs in Assets/MRTK/SDK/Features/UX/Prefabs/Cursors for example implementations of cursor behavior. In particular, the DefaultGazeCursor gives a robust implementation of changing the cursor's graphic based on contextual state.

The following classes are the out-of-box MRTK pointers available and defined in the default MRTK Pointer Profile outlined above. Each pointer prefab provided under Assets/MRTK/SDK/Features/UX/Prefabs/Pointers contains one of the pointer components attached.

LinePointer, a base pointer class, draws a line from the source of the input (i.e. the controller) in the pointer direction and supports a single ray cast in this direction. Generally, children classes such as the ShellHandRayPointer and the teleport pointers are instantiated and utilized (which also draw lines to indicate where teleportation will end up at) instead of this class which primarily provides common functionality.

CurvePointer extends the LinePointer class by allowing for multi-step ray casts along a curve. This base pointer class is useful for curved instances such as teleportation pointers where the line consistently bends into a parabola.

Also known as the Gaze/Gesture/Voice (GGV) pointer, the GGVPointer powers HoloLens 1-style look and tap interactions, primarily via Gaze and Air Tap or Gaze and voice Select interaction. The GGV pointer's position and direction is driven by the head's position and rotation.

The TouchPointer is responsible for working with Unity Touch input (i.e. touchscreen). These are 'far interactions' because the act of touching the screen will cast a ray from the camera to a potentially far location in the scene.

The MousePointer powers a screen to world raycast for far interactions, but for mouse instead of touch.

Mouse support is not available by default in MRTK but can be enabled by adding a new Input Data Provider of type MouseDeviceManager to the MRTK input profile and assigning the MixedRealityMouseInputProfile to the data provider.

The PokePointer is used to interact with game objects that support “near interaction touchable.” which are GameObjects that have an attached NearInteractionTouchable script. In the case of UnityUI, this pointer looks for NearInteractionTouchableUnityUIs. The PokePointer uses a SphereCast to determine the closest touchable element and is used to power things like the pressable buttons.

When configuring the GameObject with the NearInteractionTouchable component, make sure to configure the localForward parameter to point out of the front of the button or other object that should be made touchable. Also make sure that the touchable's bounds matches the bounds of the touchable object. 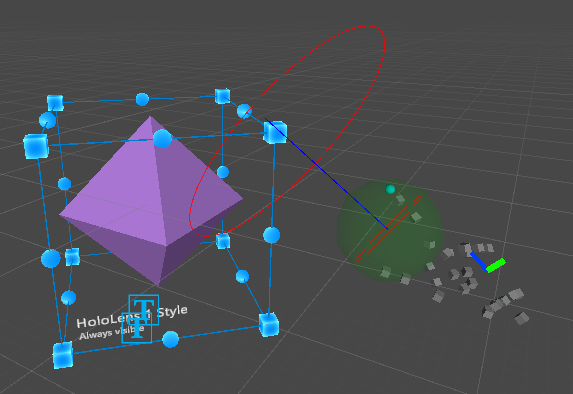 The following table details the pointer types that are typically used for the common platforms in MRTK. NOTE: it's possible to add different pointer types to these platforms. For example, you could add a Poke pointer or Sphere pointer to VR. Additionally, VR devices with a gamepad could use the GGV pointer.

MonoBehaviours that implement one or more of the following interfaces and are assigned to a GameObject with a Collider will receive Pointer interactions events as defined by the associated interface.

IMixedRealityFocusChangedHandler and IMixedRealityFocusHandler should be handled in the objects they are raised on. It is possible to receive focus events globally but, unlike other input events, global event handler won't block receiving events based on focus (the event will be received by both global handler and a corresponding object in focus).

It is possible to gather all pointers currently active by looping through the available input sources (i.e controllers and inputs available) to discover which pointers are attached to them.

Developers can subscribe to the FocusProviders PrimaryPointerChanged event to be notified when the primary pointer in focus has changed. This can be extremely useful to identify if the user is currently interacting with a scene via gaze or a hand ray or another input source.

The pointer Result property contains the current result for the scene query used to determine the object with focus. For a raycast pointer, like the ones created by default for motion controllers, gaze input and hand rays, it will contain the location and normal of the raycast hit.

To turn enable and disable pointers (for example, to disable the hand ray), set the PointerBehavior for a given pointer type via PointerUtils.

Far pointers have settings which limit how far they will raycast and interact with other objects in the scene. By default, this value is set to 10 meters. This value was chosen to remain consistent with the behavior of the HoloLens shell.

Pointer Extent - This controls the maximum distance that pointers will interact with.

Default Pointer Extent - This controls the length of the pointer ray/line that will render when the pointer is not interacting with anything.