This reference architecture shows an end-to-end stream processing pipeline. The pipeline ingests data from two sources, correlates records in the two streams, and calculates a rolling average across a time window. The results are stored for further analysis.

A reference implementation for this architecture is available on GitHub.

Scenario: A taxi company collects data about each taxi trip. For this scenario, we assume there are two separate devices sending data. The taxi has a meter that sends information about each ride — the duration, distance, and pickup and dropoff locations. A separate device accepts payments from customers and sends data about fares. The taxi company wants to calculate the average tip per mile driven, in real time, in order to spot trends.

Data sources. In this architecture, there are two data sources that generate data streams in real time. The first stream contains ride information, and the second contains fare information. The reference architecture includes a simulated data generator that reads from a set of static files and pushes the data to Event Hubs. In a real application, the data sources would be devices installed in the taxi cabs.

Azure Event Hubs. Event Hubs is an event ingestion service. This architecture uses two event hub instances, one for each data source. Each data source sends a stream of data to the associated event hub.

Cosmos DB. The output from the Stream Analytics job is a series of records, which are written as JSON documents to a Cosmos DB document database.

Microsoft Power BI. Power BI is a suite of business analytics tools to analyze data for business insights. In this architecture, it loads the data from Cosmos DB. This allows users to analyze the complete set of historical data that's been collected. You could also stream the results directly from Stream Analytics to Power BI for a real-time view of the data. For more information, see Real-time streaming in Power BI.

Azure Monitor. Azure Monitor collects performance metrics about the Azure services deployed in the solution. By visualizing these in a dashboard, you can get insights into the health of the solution.

The data generator is a .NET Core application that reads the records and sends them to Azure Event Hubs. The generator sends ride data in JSON format and fare data in CSV format.

Event Hubs uses partitions to segment the data. Partitions allow a consumer to read each partition in parallel. When you send data to Event Hubs, you can specify the partition key explicitly. Otherwise, records are assigned to partitions in round-robin fashion.

In the data generator, the common data model for both record types has a PartitionKey property which is the concatenation of Medallion, HackLicense, and VendorId.

This property is used to provide an explicit partition key when sending to Event Hubs:

The next step joins the two input streams to select matching records from each stream.

This query joins records on a set of fields that uniquely identify matching records (PartitionId and PickupTime).

In Stream Analytics, joins are temporal, meaning records are joined within a particular window of time. Otherwise, the job might need to wait indefinitely for a match. The DATEDIFF function specifies how far two matching records can be separated in time for a match.

The last step in the job computes the average tip per mile, grouped by a hopping window of 5 minutes.

Stream Analytics provides several windowing functions. A hopping window moves forward in time by a fixed period, in this case 1 minute per hop. The result is to calculate a moving average over the past 5 minutes.

In the architecture shown here, only the results of the Stream Analytics job are saved to Cosmos DB. For a big data scenario, consider also using Event Hubs Capture to save the raw event data into Azure Blob storage. Keeping the raw data will allow you to run batch queries over your historical data at later time, in order to derive new insights from the data.

For Event Hubs input, use the PARTITION BY keyword to partition the Stream Analytics job. The data will be divided into subsets based on the Event Hubs partitions.

Windowing functions and temporal joins require additional SU. When possible, use PARTITION BY so that each partition is processed separately. For more information, see Understand and adjust Streaming Units.

If it's not possible to parallelize the entire Stream Analytics job, try to break the job into multiple steps, starting with one or more parallel steps. That way, the first steps can run in parallel. For example, in this reference architecture:

Use the Stream Analytics job diagram to see how many partitions are assigned to each step in the job. The following diagram shows the job diagram for this reference architecture:

Throughput capacity for Cosmos DB is measured in Request Units (RU). In order to scale a Cosmos DB container past 10,000 RU, you must specify a partition key when you create the container, and include the partition key in every document.

In this reference architecture, new documents are created only once per minute (the hopping window interval), so the throughput requirements are quite low. For that reason, there's no need to assign a partition key in this scenario.

With any stream processing solution, it's important to monitor the performance and health of the system. Azure Monitor collects metrics and diagnostics logs for the Azure services used in the architecture. Azure Monitor is built into the Azure platform and does not require any additional code in your application.

Any of the following warning signals indicate that you should scale out the relevant Azure resource:

The following image shows the dashboard after the Stream Analytics job ran for about an hour. 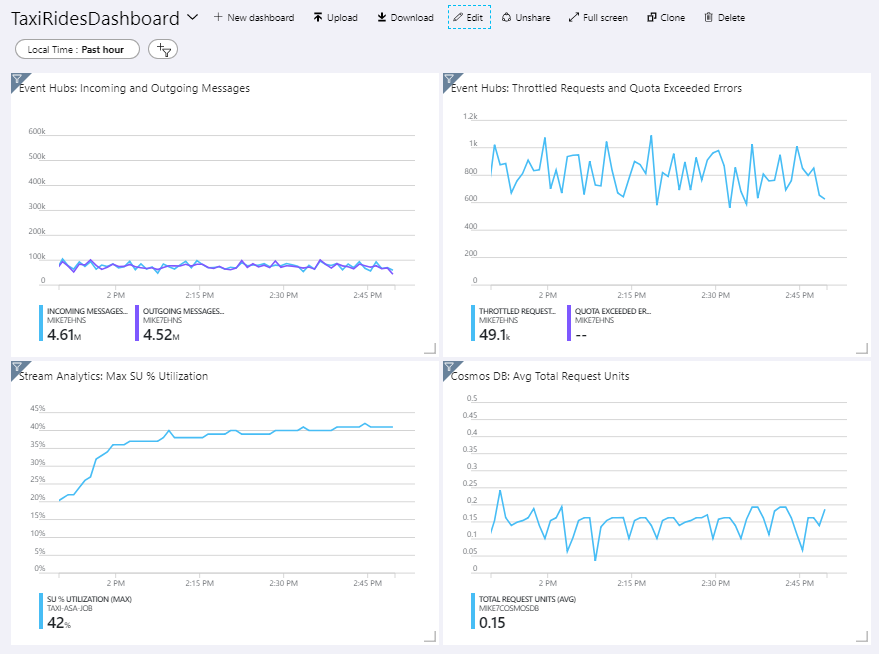 The panel on the lower left shows that the SU consumption for the Stream Analytics job climbs during the first 15 minutes and then levels off. This is a typical pattern as the job reaches a steady state. 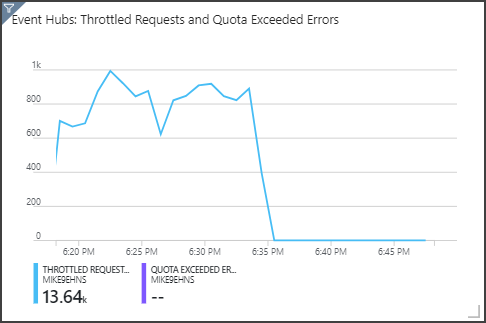 Auto-inflate was enabled at about the 06:35 mark. You can see the p drop in throttled requests, as Event Hubs automatically scaled up to 3 throughput units.

Use the Azure pricing calculator to estimate costs. Here are some considerations for services used in this reference architecture.

Azure Stream Analytics is priced by the number of streaming units ($0.11/hour) required to process the data into the service.

Stream Analytics can be expensive if you are not processing the data in real-time or small amounts of data. For those use cases, consider using Azure Functions or Logic Apps to move data from Azure Event Hubs to a data store.

To the deploy and run the reference implementation, follow the steps in the GitHub readme.

You may wish to review the following Azure example scenarios that demonstrate specific solutions using some of the same technologies: