This reference architecture shows a set of proven practices for running an N-tier application in multiple Azure regions, in order to achieve availability and a robust disaster recovery infrastructure. 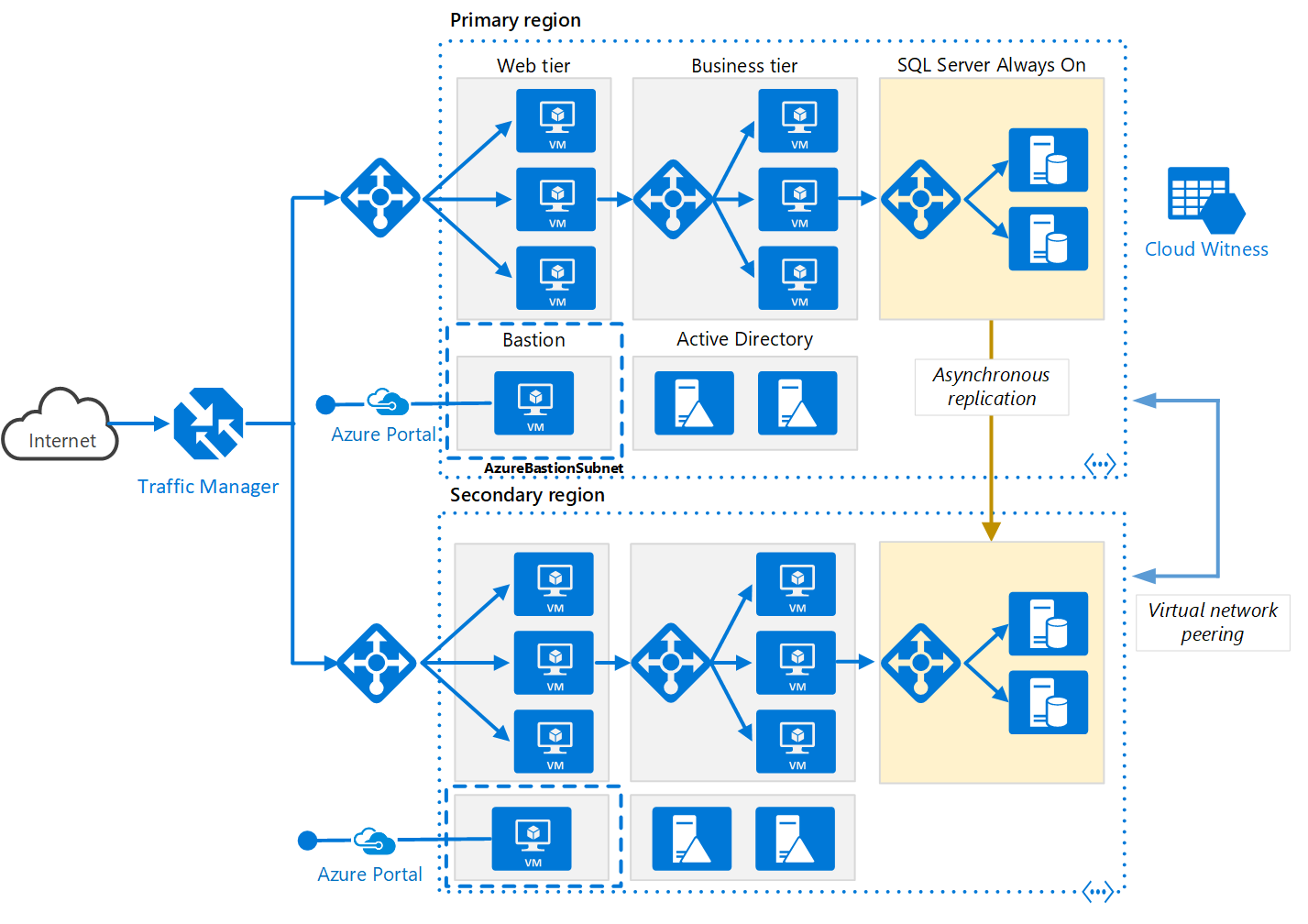 This architecture builds on the one shown in N-tier application with SQL Server.

A multi-region architecture can provide higher availability than deploying to a single region. If a regional outage affects the primary region, you can use Traffic Manager to fail over to the secondary region. This architecture can also help if an individual subsystem of the application fails.

There are several general approaches to achieving high availability across regions:

This reference architecture focuses on active/passive with hot standby, using Traffic Manager for failover. Note that you could deploy a small number of VMs for hot standby and then scale out as needed.

Each Azure region is paired with another region within the same geography. In general, choose regions from the same regional pair (for example, East US 2 and US Central). Benefits of doing so include:

However, make sure that both regions support all of the Azure services needed for your application (see Services by region). For more information about regional pairs, see Business continuity and disaster recovery (BCDR): Azure Paired Regions.

When Traffic Manager fails over there is a period of time when clients cannot reach the application. The duration is affected by the following factors:

If Traffic Manager fails over, we recommend performing a manual failback rather than implementing an automatic failback. Otherwise, you can create a situation where the application flips back and forth between regions. Verify that all application subsystems are healthy before failing back.

Another approach is to temporarily disable the endpoint until you are ready to fail back:

Depending on the cause of a failover, you might need to redeploy the resources within a region. Before failing back, perform an operational readiness test. The test should verify things like:

Prior to Windows Server 2016, SQL Server Always On Availability Groups require a domain controller, and all nodes in the availability group must be in the same Active Directory (AD) domain.

To configure the availability group:

With a complex N-tier app, you may not need to replicate the entire application in the secondary region. Instead, you might just replicate a critical subsystem that is needed to support business continuity.

For the SQL Server cluster, there are two failover scenarios to consider:

When you update your deployment, update one region at a time to reduce the chance of a global failure from an incorrect configuration or an error in the application.

Test the resiliency of the system to failures. Here are some common failure scenarios to test:

Measure the recovery times and verify they meet your business requirements. Test combinations of failure modes, as well.

Use the Azure Pricing Calculator to estimates costs. Here are some other considerations.

If you choose Azure SQL DBaas, you can save on cost because don't need to configure an Always On Availability Group and domain controller machines. There are several deployment options starting from single database up to managed instance, or elastic pools. For more information see Azure SQL pricing.

Traffic Manager billing is based on the number of DNS queries received, with a discount for services receiving more than 1 billion monthly queries. You are also charged for each monitored endpoint.

A high-availability deployment that leverages multiple Azure Regions will make use of VNET-Peering. There are different charges for VNET-Peering within the same region and for Global VNET-Peering.

Use a single Azure Resource Manager template for provisioning the Azure resources and its dependencies. Use the same template to deploy the resources to both primary and secondary regions. Include all the resources in the same virtual network so they are isolated in the same basic workload, that makes it easier to associate the workload's specific resources to a DevOps team, so that the team can independently manage all aspects of those resources. This isolation enables DevOps Team and Services to perform continuous integration and continuous delivery (CI/CD).

Also, you can use different Azure Resource Manager templates and integrate them with Azure DevOps Services to provision different environments in minutes, for example to replicate production like scenarios or load testing environments only when needed, saving cost.

Make sure not only to monitor your compute elements supporting your application code, but your data platform as well, in particular your databases, since a low performance of the data tier of an application could have serious consequences.

In order to test the Azure environment where the applications are running, it should be version-controlled and deployed through the same mechanisms as application code, then it can be tested and validated using DevOps testing paradigms too.

The following architecture uses some of the same technologies: