This reference architecture shows how to deploy virtual machines (VMs) and a virtual network configured for an N-tier application, using SQL Server on Windows for the data tier. 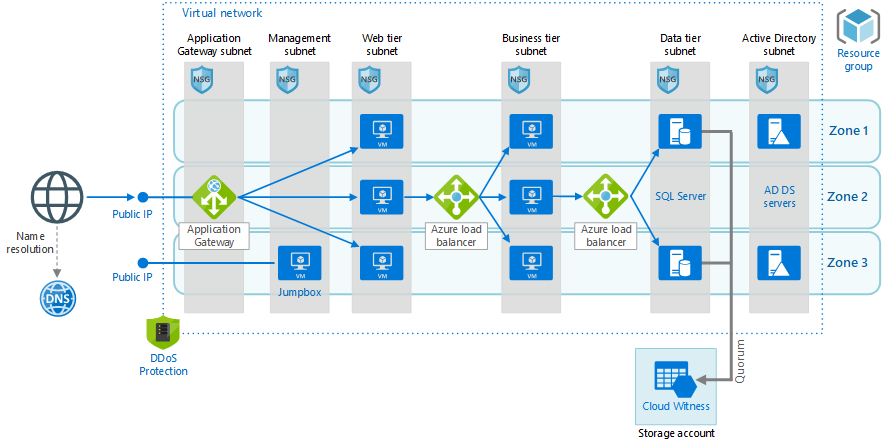 The architecture has the following components.

Your requirements might differ from the architecture described here. Use these recommendations as a starting point.

For recommendations on configuring the VMs, see Run a Windows VM on Azure.

When you create the virtual network, determine how many IP addresses your resources in each subnet require. Specify a subnet mask and a network address range large enough for the required IP addresses, using CIDR notation. Use an address space that falls within the standard private IP address blocks, which are 10.0.0.0/8, 172.16.0.0/12, and 192.168.0.0/16.

Design subnets with functionality and security requirements in mind. All VMs within the same tier or role should go into the same subnet, which can be a security boundary. For more information about designing virtual networks and subnets, see Plan and design Azure Virtual Networks.

Don't expose the VMs directly to the Internet, but instead give each VM a private IP address. Clients connect using the public IP address associated with the Application Gateway.

Define load balancer rules to direct network traffic to the VMs. For example, to enable HTTP traffic, map port 80 from the front-end configuration to port 80 on the back-end address pool. When a client sends an HTTP request to port 80, the load balancer selects a back-end IP address by using a hashing algorithm that includes the source IP address. Client requests are distributed across all the VMs in the back-end address pool.

Create rules 2 – 4 with higher priority than the first rule, so they override it.

Other tiers connect to the database through an availability group listener. The listener enables a SQL client to connect without knowing the name of the physical instance of SQL Server. VMs that access the database must be joined to the domain. The client (in this case, another tier) uses DNS to resolve the listener's virtual network name into IP addresses.

Configure the SQL Server Always On Availability Group as follows:

During a failover, existing client connections are closed. After the failover completes, new connections will be routed to the new primary replica.

If your application makes significantly more reads than writes, you can offload some of the read-only queries to a secondary replica. See Using a Listener to Connect to a Read-Only Secondary Replica (Read-Only Routing).

Test your deployment by forcing a manual failover of the availability group.

When you run virtual machines in a private virtual network, as in this architecture, there's a need to access virtual machines for software installation, patching, and so on. But, making these machines accessible to the public internet isn't a good idea because it increases the attack surface significantly. Instead, a jumpbox is used as a middle access layer.

In the past, a VM that's managed by the customer might be used as a jumpbox. In that scenario, the following recommendations apply:

For a customer-managed VM, all these rules apply. However, the current recommendation is to use Azure Bastion, a managed jumpbox solution that allows for HTML5 access to RDP or SSH behind Azure AD protection. This is a much simpler solution that ultimately has a lower total cost of ownership (TCO) for the customer.

For the web and business tiers, consider using virtual machine scale sets instead of deploying separate VMs. A scale set makes it easy to deploy and manage a set of identical VMs, and autoscale the VMs based on performance metrics. As the load on the VMs increases, additional VMs are automatically added to the load balancer. Consider scale sets if you need to quickly scale out VMs, or need to autoscale.

There are two basic ways to configure VMs deployed in a scale set:

When using any autoscale solution, test it with production-level workloads well in advance.

Each Azure subscription has default limits in place, including a maximum number of VMs per region. You can increase the limit by filing a support request. For more information, see Azure subscription and service limits, quotas, and constraints.

Not all regions support availability zones, and not all VM sizes are supported in all zones. Run the following Azure CLI command to find the supported zones for each VM size within a region:

If you deploy this architecture to a region that does not support availability zones, put the VMs for each tier inside an availability set. VMs within the same availability set are deployed across multiple physical servers, compute racks, storage units, and network switches for redundancy. Scale sets automatically use placement groups, which act as an implicit availability set.

When deploying to availability zones, use the Standard SKU of Azure Load Balancer and the v2 SKU of Application Gateway. These SKUs support cross-zone redundancy. For more information, see:

A single Application Gateway deployment can run multiple instances of the gateway. For production workloads, run at least two instances.

Application Gateway and Load Balancer both use health probes to monitor the availability of VM instances.

If a probe can't reach an instance within a timeout period, the gateway or load balancer stops sending traffic to that VM. The probe continues to check and will return the VM to the back-end pool if the VM becomes available again.

HTTP probes send an HTTP GET request to a specified path and listen for an HTTP 200 response. This path can be the root path ("/"), or a health-monitoring endpoint that implements some custom logic to check the health of the application. The endpoint must allow anonymous HTTP requests.

Use the Azure Pricing Calculator to estimates costs. Here are some other considerations.

If you choose Azure SQL DBaas, you can save on cost because don't need to configure an Always On Availability Group and domain controller machines. There are several deployment options starting from single database up to managed instance, or elastic pools. For more information see Azure SQL pricing.

DMZ. Consider adding a network virtual appliance (NVA) to create a DMZ between the Internet and the Azure virtual network. NVA is a generic term for a virtual appliance that can perform network-related tasks, such as firewall, packet inspection, auditing, and custom routing. For more information, see Implementing a DMZ between Azure and the Internet.

Since all the main resources and their dependencies are in the same virtual network in this architecture, they are isolated in the same basic workload. That fact makes it easier to associate the workload's specific resources to a team, so that the team can independently manage all aspects of those resources. This isolation enables DevOps to perform continuous integration and continuous delivery (CI/CD).

Also, you can use different deployment templates and integrate them with Azure DevOps Services to provision different environments in minutes, for example to replicate production like scenarios or load testing environments only when needed, saving cost.

In this scenario, your virtual machines are configured by using Virtual Machine Extensions, since they offer the possibility of installing certain additional software, such as anti malware and security agents. VM Extensions are installed and executed only at VM creation time. That means if the Operating System gets configured incorrectly at a later stage, it will require a manual intervention to move it back to its correct state.

Configuration Management Tools, in particular Desired State Configuration (DSC), are used in this architecture to configure Active Directory and a SQL Server Always On Availability Group.

Make sure not only to monitor your compute elements supporting your application code, but your data platform as well, in particular your databases, since a low performance of the data tier of an application could have serious consequences.

In order to test the Azure environment where the applications are running, it should be version-controlled and deployed through the same mechanisms as application code, then it can be tested and validated using DevOps testing paradigms too.