This version of Service Management Automation (SMA) has reached the end of support, we recommend you to upgrade to SMA 2019.

The runbook structure is identical between runbooks for Service Management Automation and for Microsoft Azure Automation although the two will typically work with different resources.

To add parameters to the workflow, use the Param keyword as shown in the following syntax. The management Portal will prompt the user to provide values for these parameters when they start the runbook. This sample uses the optional Parameter attribute which specifies whether or not the parameter is mandatory.

An activity is a specific task in a workflow. Just as a script is composed of one or more commands, a workflow is composed of one or more activities that are carried out in a sequence. Windows PowerShell Workflow automatically converts many of the Windows PowerShell cmdlets to activities when it runs a workflow. When you specify one of these cmdlets in your runbook, the corresponding activity is actually run by Windows Workflow Foundation. For those cmdlets without a corresponding activity, Windows PowerShell Workflow automatically runs the cmdlet within an InlineScript activity. There is a set of cmdlets that are excluded and cannot be used in a workflow unless you explicitly include them in an InlineScript block. For further details on these concepts, see Using Activities in Script Workflows.

Integration Modules that are imported into Automation are automatically available to all runbooks. Since Automation is based on Windows PowerShell 4.0, it supports auto loading of modules meaning that cmdlets from installed modules can be used without importing them into the script with Import-Module.

Any Windows PowerShell module can be imported into Automation as long as all of its dependencies can be located in a single folder. If the module depends on registry settings or files not in the default path, then it can be imported, but it will most likely not work because Automation will not be able to locate its dependencies. Modules with external dependencies can be used in a runbook by installing them on another host using and then accessing them with an InlineScript script block.

With Service Management Automation, you can use modules with external dependencies by installing them on each Worker server. While the cmdlets in these modules can be used in runbooks, they will not be discovered by Automation to support such features as the Insert Activity wizard. In order to use this feature, you can create a Portable module using the New-SmaPortableModule cmdlet. This cmdlet creates a module that includes a stub for each of its cmdlets and can be imported into Automation. When a runbook uses one of those cmdlets, the stub redirects the call to the actual cmdlet in the external module. That module must be installed on each Worker server or the call will fail.

One advantage of Windows PowerShell Workflows is the ability to perform a set of commands in parallel instead of sequentially as with a typical script. This is particularly useful in runbooks since they may perform multiple actions that take a significant time to complete. For example, a runbook might provision a set of virtual machines. Rather than performing each provisioning process in sequence with one another, the actions could be performed simultaneously increasing overall efficiency. Only when all are complete would the runbook continue.

The Sequence keyword is used to run commands in sequence within a Parallel script block. The Sequence script block runs in parallel with other commands, but the commands within the block run sequentially. This uses the syntax shown below. In this case, Activity1, Activity2, and Activity3 will start at the same time. Activity4 will start only after Activity3 has completed. Activity5 will start after all other activities have completed

A checkpoint is a snapshot of the current state of the workflow that includes the current value for variables and any output generated to that point. The last checkpoint to complete in a runbook is saved to the Automation database so that the workflow can resume even in the case of an outage. The checkpoint data is removed once the runbook job is complete.

You can set a checkpoint in a workflow with the Checkpoint-Workflow activity. When you include this activity in a runbook, a checkpoint is immediately taken. If the runbook is suspended by an error, when the job is resumed, it will resume from the point of the last checkpoint set.

In the following sample code, an error occurs after Activity2 causing the runbook to suspend. When the job is resumed, it starts by running Activity2 since this was just after the last checkpoint set.

For more information about checkpoints, see Adding Checkpoints to a Script Workflow.

You can force a runbook to suspend itself with the Suspend-Workflow activity. This activity will set a checkpoint and cause the workflow to immediately suspend. Suspending a workflow is useful for runbooks that may require a manual step to be performed before another set of activities are run.

For more information about suspending a workflow, see Making a Workflow Suspend Itself.

The InlineScript activity runs a block of commands in a separate, non-workflow session and returns its output to the workflow. While commands in a workflow are sent to Windows Workflow Foundation for processing, commands in an InlineScript block are processed by Windows PowerShell. The activity uses the standard workflow common parameters including PSComputerName and PSCredential which allow you to specify that the code block be run on another computer or using alternate credentials.

InlineScript uses the syntax shown below.

The most common use for InlineScript in a runbook is to run a block of code on another computer. This is required when cmdlets in your runbook are not installed in Automation or if the action only has permissions to be performed locally on the target computer. This is illustrated in the following diagram. 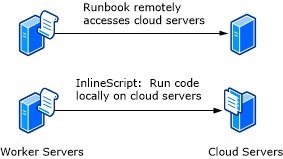 In order to run the code block on another computer, the PSComputer and PSCredential parameters are used with the InlineScript activity. A global resource such as a Credential or Connection is typically used in a runbook to provide values for these parameters. The following sample code runs a set of commands on a computer represented by a connection called MyConnection.

While InlineScript activities may be critical in certain runbooks, they should only be used when necessary for the following reasons:

If you do need to use an InlineScript, you should minimize its scope. For example, if your runbook iterates over a collection while applying the same operation to each item, the loop should occur outside of the InlineScript. This will provide the following advantages:

Keep the following recommendations in mind if you do use an InlineScript in your runbook:

For further details on using InlineScript, see Running Windows PowerShell Commands in a Workflow and about_InlineScript.