The deployment stamp pattern involves provisioning, managing, and monitoring a heterogeneous group of resources to host and operate multiple workloads or tenants. Each individual copy is called a stamp, or sometimes a service unit, scale unit, or cell. In a multi-tenant environment, every stamp or scale unit can serve a predefined number of tenants. Multiple stamps can be deployed to scale the solution almost linearly and serve an increasing number of tenants. This approach can improve the scalability of your solution, allow you to deploy instances across multiple regions, and separate your customer data.

When hosting an application in the cloud, there are certain considerations to be made. One key thing to keep in mind is the performance and reliability of your application. If you host a single instance of your solution, you might be subject to the following limitations:

To avoid these issues, consider grouping resources in scale units and provisioning multiple copies of your stamps. Each scale unit will host and serve a subset of your tenants. Stamps operate independently of each other and can be deployed and updated independently. A single geographical region might contain a single stamp, or might contain multiple stamps to allow for horizontal scale-out within the region. Stamps contain a subset of your customers. 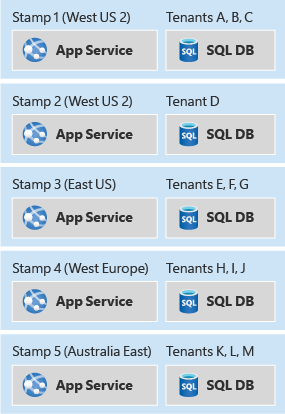 Deployment stamps can apply whether your solution uses infrastructure as a service (IaaS) or platform as a service (PaaS) components, or a mixture of both. Typically IaaS workloads require more intervention to scale, so the pattern might be useful for IaaS-heavy workloads to allow for scaling out.

Stamps can be used to implement deployment rings. If different customers want to receive service updates at different frequencies, they can be grouped onto different stamps, and each stamp could have updates deployed at different cadences.

Because stamps run independently from each other, data is implicitly sharded. Furthermore, a single stamp can make use of further sharding to internally allow for scalability and elasticity within the stamp.

The deployment stamp pattern is used internally by many Azure services, including App Service, Azure Stack, and Azure Storage.

Deployment stamps are related to, but distinct from, geodes. In a deployment stamp architecture, multiple independent instances of your system are deployed and contain a subset of your customers and users. In geodes, all instances can serve requests from any users, but this architecture is often more complex to design and build. You might also consider mixing the two patterns within one solution; the traffic routing approach described below is an example of such a hybrid scenario.

Because of the complexity that is involved in deploying identical copies of the same components, good DevOps practices are critical to ensure success when implementing this pattern. Consider describing your infrastructure as code, such as by using Bicep, JSON Azure Resource Manager templates (ARM templates), Terraform, and scripts. With this approach, you can ensure that the deployment of each stamp is predictable and repeatable. It also reduces the likelihood of human errors such as accidental mismatches in configuration between stamps.

You can deploy updates automatically to all stamps in parallel, in which case you might consider technologies like Bicep or Resource Manager templates to coordinate the deployment of your infrastructure and applications. Alternatively, you might decide to gradually roll out updates to some stamps first, and then progressively to others. Consider using a release management tool like Azure Pipelines or GitHub Actions to orchestrate deployments to each stamp. For more information, see:

Carefully consider the topology of the Azure subscriptions and resource groups for your deployments:

Use load and performance testing to determine the approximate load that a given stamp can accommodate. Load metrics might be based on the number of customers/tenants that a single stamp can accommodate, or metrics from the services that the components within the stamp emit. Ensure that you have sufficient instrumentation to measure when a given stamp is approaching its capacity, and the ability to deploy new stamps quickly to respond to demand.

The Deployment Stamp pattern works well if each stamp is addressed independently. For example, if Contoso deploys the same API application across multiple stamps, they might consider using DNS to route traffic to the relevant stamp:

Clients are then responsible for connecting to the correct stamp.

If a single ingress point for all traffic is required, a traffic routing service can be used to resolve the stamp for a given request, customer, or tenant. The traffic routing service either directs the client to the relevant URL for the stamp (for example, using an HTTP 302 response status code), or it might act as a reverse proxy and forward the traffic to the relevant stamp, without the client being aware.

For example, Azure API Management could be deployed to act in the traffic routing service role. It can determine the appropriate stamp for a request by looking up data in a Cosmos DB collection storing the mapping between tenants and stamps. API Management can then dynamically set the back-end URL to the relevant stamp's API service.

To enable geo-distribution of requests and geo-redundancy of the traffic routing service, API Management can be deployed across multiple regions, or Azure Front Door can be used to direct traffic to the closest instance. Front Door can be configured with a backend pool, enabling requests to be directed to the closest available API Management instance. If you application is not exposed via HTTP/S, you can use a cross-region Azure Load Balancer to distribute incoming calls to regional Azure Load Balancers. The global distribution feature of Azure Cosmos DB can be used to keep the mapping information updated across each region.

If a traffic-routing service is included in your solution, consider whether it acts as a gateway and could therefore perform gateway offloading for the other services, such as token validation, throttling, and authorization. 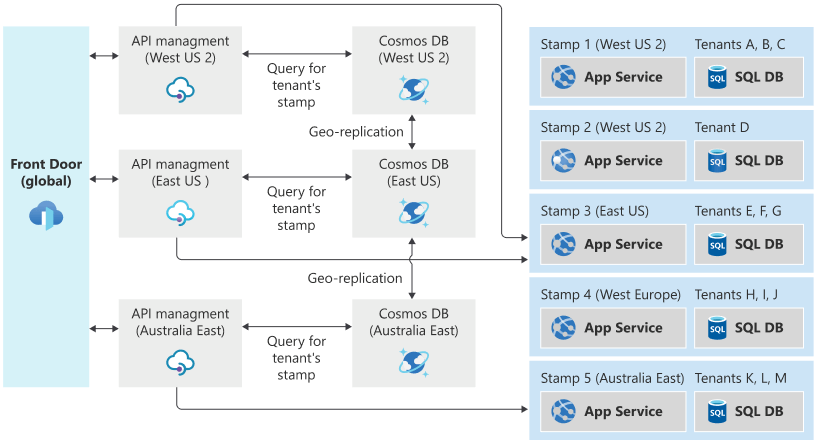 Suppose a user normally resides in New York. Their data is stored in the stamp 3, in the East US region.

If the user travels to California and then accesses the system, their connection will likely be routed through the West US 2 region because that's closest to where they are geographically when they make the request. However, the request has to ultimately be served by stamp 3, because that's where their data is stored. The traffic routing system ensures that the request is routed to the correct stamp.

You should consider the following points when deciding how to implement this pattern:

This pattern is useful when you have:

This pattern is not suitable for:

The following example deploys multiple stamps of a simple PaaS solution, with an app service and a SQL Database in each stamp. While stamps can be configured in any region that support the services deployed in the template, for illustration purposes this template deploys two stamps within the West US 2 region and a further stamp in the West Europe region. Within a stamp, the app service receives its own public DNS hostname and it can receive connections independently of all other stamps.

There are alternative approaches to deploying stamps with a Resource Manager template, including using nested templates or linked templates to decouple the definition of each stamp from the iteration required to deploy multiple copies.

The following example deploys an implementation of a traffic routing solution that could be used with a set of deployment stamps for a hypothetical API application. To allow for geographical distribution of incoming requests, Front Door is deployed alongside multiple instances of API Management on the consumption tier. Each API Management instance reads the tenant ID from the request URL and then looks up the relevant stamp for the request from a geo-distributed Cosmos DB data store. The request is then forwarded to the relevant back-end stamp.