An e-commerce company in the travel industry is modernizing their legacy browser-based software stack. While their existing stack is mostly monolithic, some SOAP-based HTTP services exist from a recent project. They are considering the creation of additional revenue streams to monetize some of the internal intellectual property that's been developed.

Goals for the project include addressing technical debt, improving ongoing maintenance, and accelerating feature development with fewer regression bugs. The project will use an iterative process to avoid risk, with some steps performed in parallel:

The management team does not want to modernize unnecessarily. They also want to maintain control of scope and costs. To do this, they have decided to preserve their existing SOAP HTTP services. They also intend to minimize changes to the existing UI. Azure API Management (APIM) can be used to address many of the project's requirements and constraints.

You can use this scenario to: 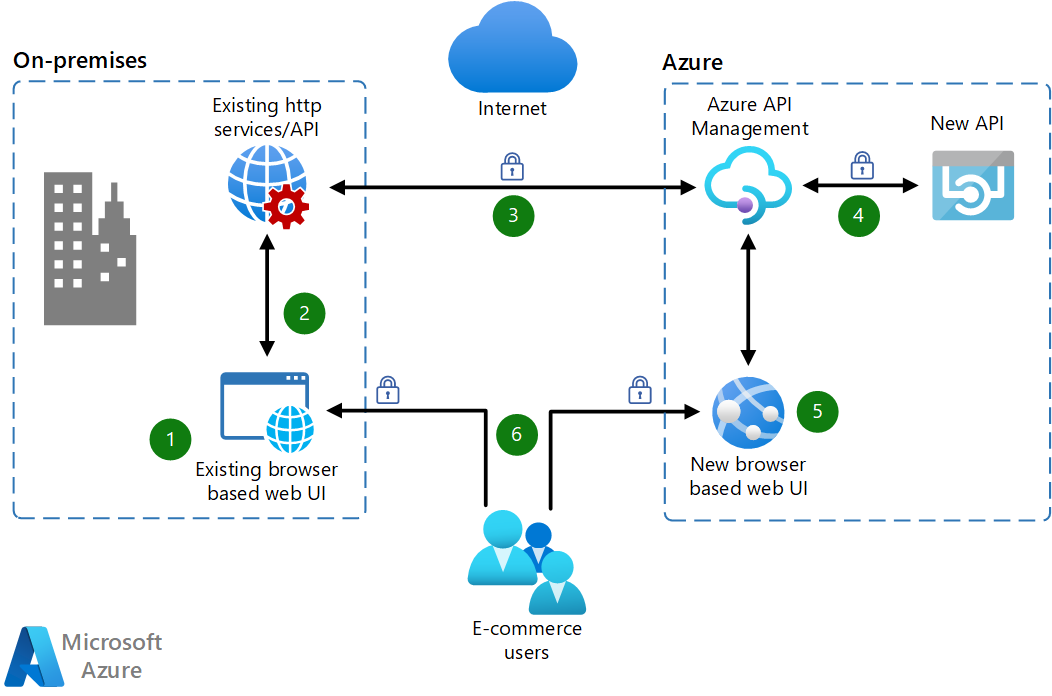 The new UI will be hosted as a platform as a service (PaaS) application on Azure, and will depend on both existing and new HTTP APIs. These APIs will ship with a better-designed set of interfaces enabling better performance, easier integration, and future extensibility.

The APIM instance will be configured to map the legacy HTTP services to a new API contract. By doing this, the new Web UI is unaware of the integration with a set of legacy services/APIs and new APIs. In the future, the project team will gradually port functionality to the new APIs and retire the original services. These changes will be handled within APIM configuration, leaving the front-end UI unaffected and avoiding redevelopment work.

For general information on connecting API Management to a VNet, see here.

To get started, create an Azure API Management instance in the portal.

Alternatively, you can choose from an existing Azure Resource Manager quickstart template that aligns to your specific use case.

API Management is offered in four tiers: developer, basic, standard, and premium. You can find detailed guidance on the difference in these tiers at the Azure API Management pricing guidance here.

Customers can scale API Management by adding and removing units. Each unit has capacity that depends on its tier.

To view projected costs and customize to your deployment needs, you can modify the number of scale units and App Service instances in the Azure Pricing Calculator.

This article is maintained by Microsoft. It was originally written by the following contributors.